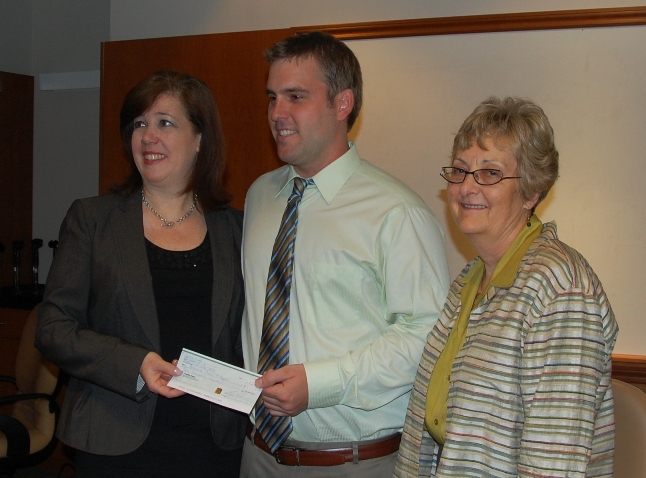 Damen
feels that chiropractors could be a powerful ally in the fight against skin cancer,
as they see more skin than most health care professionals do.

“Patients don’t see chiropractors as someone
they can ask about skin cancer,” said Damen, at a gathering with CMCC staff
members and Cindy Goldman, director of special events for Princess Margaret
Hospital.  “Yet, given the numbers of patients seen by
chiropractors in a week, month or year, chiropractors would be able to screen
millions of people!”

When Tyler
Damen first heard the words, “You have melanoma”, the 24-year-old knew almost
nothing about this potentially deadly form of cancer.  A year later, following five surgeries and a grueling
11 month course of chemotherapy, Damen had a new goal in his life: to change
the statistics around skin cancer and, in particular, melanoma.  That was only four short years ago.

At the
time of his diagnosis, Damen had just completed an undergraduate degree in
kinesiology and was set to begin the first of four years as a student at
CMCC.  Continuing his studies even through
treatment, Damen created the charity Chiro’s Care. The charity has a
three-pronged approach to improving the outcomes for skin cancer victims:
educate chiropractors on how to identify possible skin cancer in patients, so
they may refer these patients to the appropriate specialist: raise funds for
melanoma research: and raise funds for patient care for melanoma victims.

Damen
created The Chiropractor’s Guide to Skin
Cancer for DCs specifically, and, through the support of CMCC, it was sent
out to 5400 chiropractors across North America.

“I
realized that if I could educate DCs about the signs of skin cancer,” notes
Damen, “that we would have thousands of professionals helping to diagnose skin
cancer earlier – this is currently one of our best strategies for increasing
survival rates.”

At the
donation gathering, CMCC president, Dr. Jean Moss, said, “Since chiropractors
see a lot of skin, this guide would help them to identify lesions that should
be looked at more carefully.”

Dr. Moss
also told those present at the gathering that CMCC is proud to have students
like Tyler who are not only committed to their profession but who are also
committed to making a difference in their communities as well.

Damen
presented a cheque for $10 000 to Princess
Margaret Hospital
and says he hopes this will be the first in a series of donations that Chiro’s
Care will make.  He hopes to continue
gathering funds through the sale of Chiro’s Care T-shirts.  The T-shirts are $15 + shipping and a portion
of proceeds from them also goes into the production of the skin cancer guide
for DCs. Tyler looks forward to being able to sell these guides, in the near
future, to collect further funds for melanoma research and victims of
melanoma.

Speaking
on behalf of Princess Margaret Hospital, Cindy Goldman thanked Tyler Damen and
Chiro’s Care, saying, “I’m always impressed by the power that one person has to
impact on a community, a school and a profession – even by asking, or prompting
the necessary questions.  This is an
impressive thing that you have done!”

For more
information on Chiro’s Care, and to order a T-Shirt or enquire about the The Chiropractor’s Guide to Skin Cancer,
please visit www.chiros-care.com