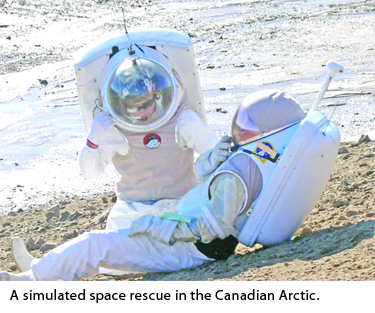 Last summer, Martin Gagnon, DC, MSc, was awarded a scholarship from the European Space Agency (ESA) to participate in the prestigious International Space University (ISU) Summer Session Program (SSP).  He joined a select group of 104 individuals from 27 countries who gathered on the main campus of ISU in Strasbourg, France, to examine aspects of space exploration.

The nine-week session is designed to prepare professionals to work in the space sector. It consists of lectures, workshops and team projects on a variety of topics including life sciences, physical sciences, policy and law, engineering,  business administration, and satellite applications. In a co-operative international, intercultural, and interdisciplinary milieu, the SSP accommodates wide-ranging perspectives on the world’s space activities.

Dr. Gagnon is the first chiropractor to be involved since the program was initiated in 1988.  With a chiropractic degree from the Université du Québec à Trois-Rivières (UQTR) earned in 1999 and a master of sciences degree from York University granted in 2003, he currently practises at Centre Chiropratique Chambly in Chambly, Quebec.
Why would a chiropractor even be interested in space?  Gagnon’s answer is that the human body’s response to weightlessness is most intriguing.  During their stay in space, astronauts suffer from cardiovascular, musculoskeletal, neurological and vestibular effects.  From a chiropractor’s perspective, the most interesting phenomenon produced by weightlessness is the elongation of the spine.  It has been demonstrated that astronauts get taller by as much as 5 to 7 centimetres during space flight, which results in back pain for 68 per cent of them.  There is a decrease in thoracic kyphosis and lumbar lordosis, combined with an increase in intervertebral disc size.  Other problems commonly encountered by astronauts include muscle decompensation from disuse atrophy, especially in the anti-gravity muscles (i.e., paraspinals, soleus, and gastrocnemius), bone resorption, orthostatic hypotension, space motion sickness and vestibular disorientation.

LIFELONG FASCINATION WITH FLIGHT
Since childhood, Gagnon has been fascinated by aviation and space exploration.  He became a glider and a private pilot even before obtaining his driver’s licence.  “I first heard about ISU during my undergraduate studies at UQTR.  I was studying chiropractic, and I already had the intention of directing my career towards the study of the human body’s adaptation to weightlessness,” says Gagnon. “I made that decision the day I learned about the different physiological changes that astronauts had to cope with during their journey in space.”

While a graduate student at York University, Gagnon became interested in the Coriolis illusion – a tumbling sensation of vestibular origin – that  can cause aircraft pilots to become spatially disoriented.  His experiments were conducted in the Aerospace Life Support Section Spatial Disorientation Laboratory at DRDC-Toronto (Defence Research Development Canada), a civilian and military human factors research institution.  This research synthesized his training as a flyer with the neurology and scientific method he had learned at chiropractic college.
A number of the ISU workshops permitted first-hand discovery of the different countermeasures used to fight the body’s adaptation to microgravity.  The body conforms so well to space that it has trouble re-adapting to Earth’s gravity.  When in space, astronauts exercise two hours per day to stay in shape in preparation for the return to Earth.  They maintain cardiovascular function by using a treadmill and cycle ergometer.  Since hoisting free weights in microgravity is not advisable, astronauts maintain their muscle strength with a spring-and-pulley device.

A simulated spacewalk (extra vehicular activity — EVA) was carried out in a swimming pool with scuba diving equipment.  Students were also required to simulate the repair of space hardware. From Strasbourg they supported mission controllers during a simulated EVA at Haughton Crater on Devon Island in the Canadian Arctic. Personnel from the  National Aeronautics and Space Administration (NASA), ESA, the Canadian Space Agency and the space industry test equipment and procedures on  this crater, which has a topography similar to the Moon and Mars.

During this exercise, ISU students were in communication with Houston’s Mission Control Center, which relayed their messages to the crew on the ground in the Arctic.

The necessity of multidisciplinary collaboration for the achievement of positive outcomes in complex projects was reinforced. Gagnon was invited by a NASA flight surgeon to demonstrate the assessment and management of musculoskeletal disorders in the space medicine workshop. In the neurology workshop, he was asked to share his knowledge on spatial orientation and vestibular physiology, and he presented a poster at the ISU alumni conference on back pain and related neurological problems in microgravity.  He notes that chiropractic was very well received in this academic community.

The summer session at the International Space University is a forum for sharing knowledge as well as for developing contacts with other professionals. It is a setting where those who are passionate about space can discuss, debate and collaborate. His recent experience there has fuelled Dr. Martin Gagon’s plans to continue to investigate neuromusculoskeletal adaptation to weightlessness.•


Related
Space travel and your joints: A novel study of joint cartilage and what it could mean for future astronauts
Space travel is backbreaking work: study
Sound science
10 things to keep in mind while searching for potential clinic space