Since I started in chiropractic about 40 years ago, I have been troubled by the vertebral subluxation. It’s not that I question whether subluxations exist.  The problem is that I can feel subluxations, but I don’t understand what is going on and why they happen.

The various explanations of subluxations I have seen do more to describe what we observe than to outline an understandable mechanism for why and how they occur in the first place, and especially, why they don’t or can’t automatically fix themselves. Homeostasis occurs in many aspects of physiology, why not in spinal biomechanics?

Many years ago, Drs. Joe Flesia and Guy Riekeman, of Renaissance International, defined the subluxation by its features, specifically kinesiopathology, myopathology, neuropathology, histopathology, and chemopathology, but they never suggested a plausible reason for why these things happen. Applied Kinesiology describes “Five Factors of the Intervertebral Foramen:” the nerve, the vessels, the lymph, the meridian system, and the cerebrospinal fluid, and outlines how to address each of these “factors,” but never discusses why and how intervertebral problems develop and need fixing. The Motion Palpation Institute taught about ligamentous and muscular “fixations,” and how to adjust and release them, again without any discussions of cause or mechanisms. More recently, the Rubicon Group, a consortium of chiropractic institutions, defined the subluxation as “a self-perpetuating, central segmental motor control problem that involves a joint, such as a vertebral motion segment, that is not moving appropriately.”1 The International Federation of Chiropractors and Organizations (IFCO) objected to the Rubicon definition and proposed its own: “an alteration of the intervertebral relationships…accompanied by a change in the morphology of the tissue occupying the neural canal and/or intervertebral foramina, as well as an alteration of neural function….”2 All are descriptions of what can be observed, without any discussion of why.

The fact that we have not come up with a plausible understanding and explanation of the central concept that defines our clinical approach, and thus, the rationale for the chiropractic adjustment, may have contributed to the disregard often paid to chiropractic by other branches of the healing arts.

Despite my lack of understanding, I diligently learned a variety of chiropractic techniques, and when I treated my patients, my work seemed to help many of them. Sometimes they got longterm relief, but more often, only for a brief period until they needed to be adjusted again. Even though I learned Clarence Gonstead’s famous aphorism about adjusting: “find it, fix it, and leave it alone,” in school, I was taught something very different. I learned that a reasonable approach to patient management was to adjust patients three times per week for a while, then twice per week, then once per week, then less, and finally winnow them down to a “maintenance” schedule. Even those considered “Gonstead practitioners” adjusted the same segments repeatedly as if adjusting that often would ultimately coerce the patient’s spine into behaving. In practice, patients would come to me with cards from other chiropractors specifying their “listings,” so I would know how to adjust them, as if such “listings” would never change, like their blood type.

Although I studied applied kinesiology, motion palpation, and other systems that purported to more fully explain things, I still felt frustrated that they had been teaching what to do but not why. It bothered me that what I did often didn’t last for my patients and that many problems didn’t respond the way I hoped they would. I felt there must be something more. 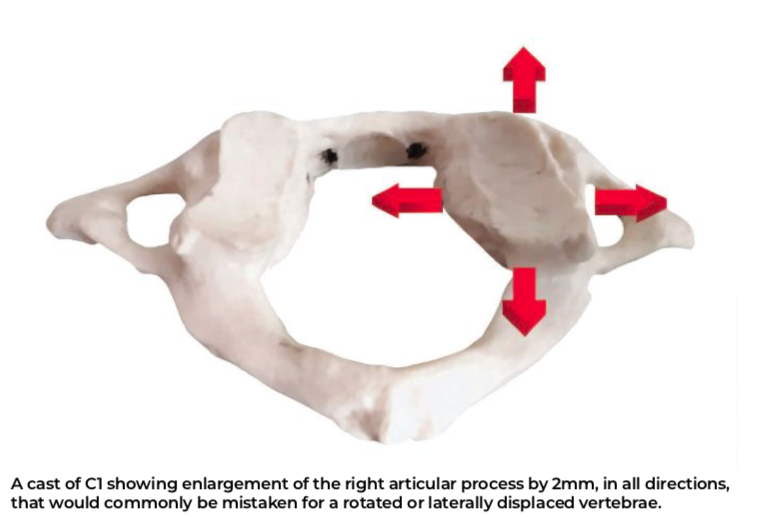 Then, one day about twenty years ago, I read an article by George Roth, DC, ND, a practitioner in Toronto, which described a treatment system that seemed to address all of my concerns. We spoke extensively on the phone, and what he said about biomechanics and physiology was different from what I had learned in school, but it made more sense than anything that I had heard previously. I trained in his work, which is called Matrix Repatterning, and the concepts and application of Matrix Repatterning has revolutionized my practice. While Roth was an intern at CMCC, he was reviewing X-ray images when he noticed that bone structures often seemed to differ in size from one side of his patient to the other. None of his teachers could account for this. Also, it appeared to Roth that the larger side often displayed more arthritic changes, such as articular degeneration, sclerosis, and osteophyte formation. Although the conventional explanation for this phenomenon is that joint dysfunction leads to degeneration, which causes deposition of excess calcification and bony enlargement, what Roth was observing seemed different – as if the bone expansion preceded the degeneration. The more he looked, the more he found such disparities in size and degenerative changes. He examined the bone and joint specimens in the anatomy lab, includ- ing vertebra, and found that articular processes and even vertebral bodies were different in size from one side to the other. The same thing was palpable in patients, in areas such as the knees, greater trochanters, and humeral heads. The soft tissue around the more massive bone structure was often more tender, and the associated muscles were typically more hypertonic.

Roth speculated that the larger bone structure had somehow expanded, and seemed to be creating dysfunction of the associated joints and more tension on the surrounding soft tissues. 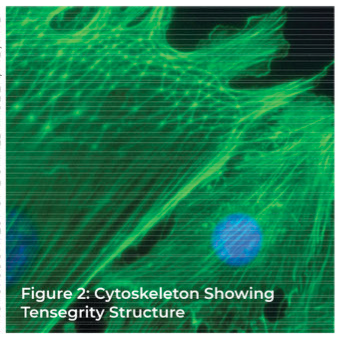 He reasoned that impact injuries absorbed by the body are what cause the bone expansion and that the bone expansion was due to changes to the molecular arrangement of the bone. The bone changes then lead to local joint dysfunc- tion as well as patterns of strain and tension affecting the whole body. He found that in many patients, their symptomatic areas are caused by these patterns of strain and were often remote from the injured areas. Many health problems, including vertebral subluxations and the dys- function they induce, seemed to be created this way. Matrix Repatterning was developed to deal with all of this.

There was science to support Roth’s observations. Stephen Levin, an orthopedic surgeon, has written about anatomy organized according to the principle of tensegrity, an arrangement like a geodesic dome that could theoretically account for the force distribution Roth hypothesized.3 Donald Ingber, a cell biologist at Harvard, has published extensively on the mechanical properties of the cytoskeleton and how the cell is a tensegrity structure. In the January 1998 issue of Scientific American, Ingber stated that cells respond to mechanical stress by becoming enlarged and rigid.4 This demonstrates, at the cellular level, what Levin and Roth had observed at the macro level, with absorbed injury creating enlargement and compensatory patterns of tension.

In 2005, Paul Hansma and his team at the University of California demonstrated that, at the cellular and molecular levels, bone changes shape and actually gets bigger when injured as a way to dissipate force and protect against worse injury.5

This research and more suggests that bodies are composed of a continuous fabric, organized by the principle of tensegrity architecture, linking the system from the macroscale to the microscale of the cell and the extracellular matrix. According to the developing field of electrobiology, the tensegrity architecture is what generated the electromagnetic field that suffuses living things.

Matrix Repatterning is a new form of therapy consistent with this understanding of anatomy and physiology. It is unlike anything else I have experienced, and it commonly creates lasting changes in patients with a wide variety of health

problems. The treatment process enables practi- tioners to precisely determine the location in the patient’s body where the injury was absorbed, and then apply gentle manual pressure that facilitates the discharge of the energy that was absorbed when the affective areas were injured. As these areas, which are often not the symp- tomatic areas, are normalized, the compensatory patterns of tension dissipate. The therapy, in addition to rapidly resolving patients’ pain and mechanical dysfunction, typically restores the involved bone structures to a more normal size, shape and resilience, normalizes joint function and improves myofascial tone, neurological balance and, at times, organ function.

I believe that Roth has solved the mystery of the vertebral subluxation. My experience with every patient I have treated with Matrix Repatterning (which is all that I use to address mechanical problems) has taught me that vertebral subluxations are caused by the effects of injury absorbed by bones and other structures, sometimes spinal, and often remote from the spine, which create patterns of compensation throughout the body that involve the spine. I have found that the reason vertebral subluxations recur is that the underlying patterns of absorbed injury and compensation have not been addressed. The work routinely resolves subluxations, and since I have been doing it, I have not found it necessary to adjust anyone, or, for that matter, to fix any muscles with AK procedures.

As an example, I had a patient who had been a linebacker in the NFL. Before I used Matrix Repatterning, I had to adjust him weekly to keep him from experiencing bothersome low back pain. If he went longer than two weeks between adjustments, he suffered. I used every trick I knew, but the results were the same. When I started using Matrix Repatterning, I treated him with it a few times, and then life circumstances caused him to stop coming in for treatment. I didn’t hear from him for about three years. At that time, he called and apologized for the time gap and asked if he could come back in to see me. He came in complaining of neck and arm pain from a car crash. When I asked him about his low back, he said it had been fine since I did the new treatments.

A chiropractor friend of mine had sciatica that hadn’t responded to adjusting or any other treatment he had tried. When I checked him out, the major problem I found was in his cra- nium, and he then told me about a head injury he had sustained before the sciatica started. I treated his skull with Matrix Repatterning and his sciatica resolved.

important “first intervention” in the treatment of concussion. He went on to say, “I view it as prudent to have a Matrix assessment after a blow to the head…observing such cases has led me to hope that one day Matrix Repatterning will be routinely applied in hospital emergency departments.”6

Common injuries are absorbed by the densest structures of the body: bones and fluidfilled organs and the nearby soft tissues and joint structures are often affected by the mechanical stresses imposed on them. When bones are injured, they expand, and when they expand, the joints they are part of no longer work right, whether spinal, cranial, or peripheral. Further- more, when bones and other deep structures absorb injuries, compensatory strain patterns develop. These compensatory strain patterns are actually the cause of many of the painful, limit- ing, and degenerative conditions we encounter in our practices. For chiropractors, Matrix Repatterning treatment commonly results in the almost immediate restoration of normal spinal and peripheral articular position and function, without the need to adjust.

Allen Berger, DC, FIA CA, CMRP, has been practicing in Denver, Colorado since 1980, treating difficult and complex cases using Matrix Repatterning and other leadingedge, science-based modalities. He can be contacted via email at: allenberger@confluencewellness.com

Further information about Matrix Repatterning is available online at matrixforpractitioners.com and at confluencewellness.com.

3. Levin S. The Importance of Soft Tissues for Structural Support of the Body Spine: State of the Art Reviews Volume 9/Number 2, May 1995, Hanley and Belfus, Philadelphia