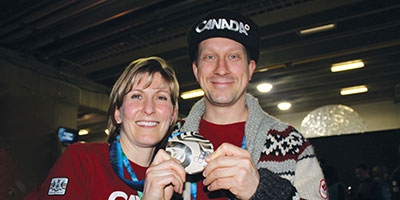 You might know Cori Morris as a member of the women’s curling team that won the silver medal at the Vancouver 2010 Winter Olympics. But you might not know just how important chiropractic care is for this Calgary athlete.

You might know Cori Morris as a member of the women’s curling team that won the silver medal at the Vancouver 2010 Winter Olympics. But you might not know just how important chiropractic care is for this Calgary athlete.

When Morris was in her early 20s, she started having trouble with her sacroiliac joint – a result of imbalances caused by years of figure skating and other sports. Chiropractic treatment helped. But when she began curling on a competitive level, the care she was receiving no longer did the job. Seeking a different option, Morris found ProActive Health Group in Calgary, where Dr. Greg Uchacz is the clinic director.

“I checked out the website and saw Greg’s involvement with athletes at the highest levels, and decided to give it a try,” Morris says. “Greg became an instrumental part of a journey that took me all the way to the podium.”

Uchacz knows chiropractic care for athletes. He is a fellow of the Royal College of Chiropractic Sports Sciences – Canada (RCCSS), which means he has completed the college’s rigorous Sports Sciences Residency Program. He has also supported athletes at more than 180 international competitions, including three Olympic Winter Games. He is the health-care director for Nordic Combined Canada. For eight years, he was RCCSS’s president. And – like other sports specialists – he faced an alpine incline to accomplish these career achievements.

In fact, any DC who has braved the RCCSS fellowship program and gone on to specialize in treating athletes may be said to have tackled a task that mimics what their patients face as they sweat their way to sports excellence. It involves effort, sacrifice and dedication with no guarantee of success. Yet RCCSS fellows say their work is as rewarding as a gold medal finish.

Want to know what it takes to be a sports specialist? Read on to learn about the educational gauntlet, characteristics of the elite-athlete patient, and the business aspects of operating a sports-focused practice.

A left hook to the books
RCCSS’s Sports Sciences Residency Program is the course every chiropractor has to master to become a sports specialist. Offered through a number of post-secondary institutions including the University of Calgary, Dalhousie University in Halifax and Canadian Memorial Chiropractic College in Toronto, the program involves 1,000 hours of fieldwork and various subjects of study, such as nutrition, exercise physiology and acute injury management.

The program has evolved since it began in 1984, but one aspect hasn’t changed: it’s difficult. Many chiropractors fail.

“The volume of information is one thing,” says Dr. Brian Seaman at Halifax Chiropractic Clinic. Only three of the doctors who wrote the exam in his year of 1988 passed (including him). Five others failed. Seaman went on to treat competitors at four Olympic games, the Pan American Games and the Canada Winter Games.

The fellowship program’s heavy course workload isn’t the only challenge. Many chiropractors also run their own practices while studying part time, and it isn’t easy to balance business with learning.

“If you take the practitioner out of the educational environment and put him or her into practice… it’s harder for the practitioner to incorporate everything he or she is learning,” says Dr. Lawrence Schledewitz at Loewen Chiropractic Clinic in Steinbach, Man. He failed the written portion of the exam on his first attempt in 1997 but passed in 1999. Then he really got to work. He served at the Pan American Games in Winnipeg (1999), the Commonwealth Games in England (2002) and the Summer Olympic Games in Athens (2004) and Beijing (2008).

Sports specialists have to keep abreast of the latest information. That’s difficult to do once school is over, but many chiropractors have their ways. Seaman relies on the six residents he oversees as the residency program coordinator for the RCCSS in Atlantic Canada.

“This year, we assigned each of the residents an area of the body – shoulder, knee, hip. They had to do a case presentation. They brought in recent research, information about tests and the kinds of injuries that would require certain imaging, whether that’s an X-ray, an MRI or a CT scan. It’s a great way for me as an older practitioner to stay on top of things,” he says.

Stronger, more mindful patients
After becoming a fellow of the RCCSS, get ready to work with a different sort of patient. Athletes’ injuries tend to be more traumatic than the injuries of non-athletes.

On the other hand, athletes are “typically healthier than an individual who has a more sedentary lifestyle,” he says. “So people who have sports injuries heal more quickly. And they’re more inclined to follow your advice and do the rehabilitation to heal sooner.”

Dr. Scott Howitt agrees. “Athletes may be a little more focused on a particular result or time frame,” says the director at Sports Performance Centres in Vaughan, Ont. “They have a specific competition at a particular time that they have to be ready for. Members of the general public don’t have those constraints.”

Athletes have a better sense of their well-being compared to non-athletes. “They have a trained awareness of their own body,” says Schledewitz. “If you ask them how they’re feeling, they can give you a pretty accurate answer.”

Athletes need their chiropractors to pay particular attention to specific areas of their bodies depending on the sport. Consider treatment for a competitor in the sliding sport of skeleton. “A skeleton athlete has certain extremely unique movement patterns that no average individual has to do,” Uchacz says. “A skeleton athlete has to bend right over, hold something on the ground, and they have to sprint as fast as they can.”

A DC treating a skeleton racer has to think differently. “The athlete’s soleus muscles in the calves have to be extremely flexible in order to do this sport,” Uchacz says. “If there’s tightness there, I have to work on it.”

The soleus muscles play a big part in ankle dorsiflexion – the extension of the top of the foot at the ankle, which is important for someone running while bent over. As well, the athlete’s posterior hip capsules have to be stretched.

“We almost have to make them hyper mobile,” Uchacz says, so movement from the hip joints transmits as far back as possible and the athlete “can almost bring their knee up to their nose while they’re running.”

Every bit of flexibility is important. “At the Athens Olympics, the difference between first place – a gold medal – and fourth place – you’re off the podium – was one per cent,” says Seaman. He notes that for a sprinter, one per cent equals a tenth of a second. For weight lifters, one per cent could mean as little as five pounds.

“It gives you an idea of how close the top athletes are. So for my colleagues and I, if we can pick up on muscle imbalances, muscle weakness, joint restrictions or anything we can correct, we’re going to enhance how that athlete moves. And if we can enhance how they move, that’s going to make them more efficient and hopefully more successful at their sport.”

Wrestling with business
DCs who want to succeed with sports-specializing practices should keep a few things in mind. First, get ready for extremely busy days. The expectation is to not only work on building and maintaining the business, but they also have to participate in sports events where the pressure to perform ramps up.

Seaman is the medical director for a midget hockey tournament with 40 teams. During a recent competition, the clinic he and his crew established was always active.

“We had 130-plus visits. We assessed close to 20 hockey players for concussions. We even had one player who was hit, went down and was unconscious, and we suspected a spinal injury. So we were involved in assisting the paramedics.”

Alongside this hectic pace, sports specialists need to maintain certain standards. Howitt, for one, expects his patients to be physically active, or at least willing to try.

“If a patient says, ‘I don’t do anything and I don’t have a desire to do anything,’ I don’t really know how I’m going to work with that individual,” he says.

A chiropractor’s high standards should not get in the way of practicality, though. For instance, many sports specialists need to work with all sorts of patients.

“In my community, if I were to just see athletes, I would have trouble keeping my doors open,” says Schledewitz. “There simply aren’t enough athletes here who select chiropractic as one of their forms of care for me to do that.”

The RCCSS fellowship designation helps draw patients who may not be athletes themselves yet seek top treatment.

“I saw a gentleman recently,” Schledewitz says. “He was seeing a therapist for carpal tunnel. I asked, ‘Why didn’t you stay with that therapist?’ He said, ‘Because you’re the Olympic chiropractor.’”

Even if acquiring a sports specialization is no jog in the park – more of an Ironman triathlon – fellowship has its privileges. Alongside opportunities to serve at major sports events and the wherewithal to build a unique practice, it offers DCs the chance to work with Olympic competitors, professional baseball players and other elite athletes – maybe even for the duration of those players’ careers. Cori Morris, for instance, sees no reason to go to a chiropractor who isn’t a sports specialist.

“Given my lifestyle and continued involvement in sport, my preference would always be to seek out a sports chiropractor specifically,” she says.