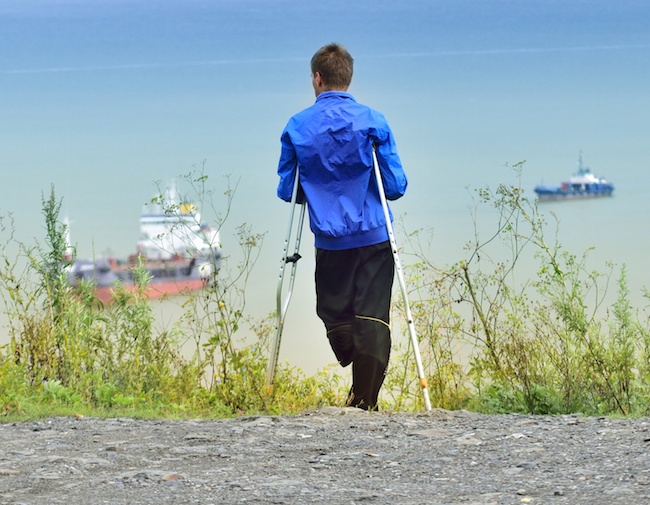 FREDERICTON – Imagine losing a limb. Now imagine suffering from pain that feels like it’s coming from the limb that is no longer there.

That’s the case for up to 70 per cent of amputees.

Researchers at the University of New Brunswick are trying to determine whether the use of virtual reality can help reduce the brain signals that cause phantom pain.

“In the brain, we need to realign what’s happening with the sensations that the user is feeling with their perception of their limb,” said Jon Sensinger, associate director of UNB’s Institute of Biomedical Engineering.

“This is a new technique that, in a limited field trial, showed great promise – where almost everyone had reduced levels of phantom pain,” he said.

There was an initial study in Sweden in 2016, led by Max Ortiz Catalan, founder of the Biomechatronics and Neurorehabilitation Laboratory at the Chalmers University of Technology in Gothenburg. He is now co-ordinating the latest research with trials in eight locations around the world.

The University of New Brunswick in Fredericton is the only Canadian location.

The research uses sensors, a computer screen and an avatar image of the missing limb.

“You can position your avatar limb in three-dimensional space just by moving your body around,” Sensinger said.

Wendy Hill, a research occupational therapist, said they are trying to trick the brain into thinking the missing limb is still there.

“The person can already close their eyes and imagine that limb is still there,” said Hill, who is working with patients in the UNB portion of the study.

“They still feel it in most cases. Tricking the brain into believing that it’s still there is an effective way of managing the pain. Looking at a limb on the screen and following specific movement patterns using the phantom limb is like exercising that phantom limb.”

Sensinger said there’s a great deal to learn about why some people experience phantom pain and others don’t, and how different treatments and the use of prostheses can make a difference.

“Phantom pain can be a huge disability. For some people, they’re always in pain – teeth-gnashing, grinding-your-teeth kind of pain,” he said.

Once the results of the broader study are analyzed, the hope is that within five years virtual reality therapy will replace mirror therapy, improving outcomes for patients.

So far, one person has gone through the study in Fredericton, and Hill said the experience was very rewarding.

She said researchers in New Brunswick are looking for another nine test patients.

They need to be at least 18 years old, an amputee for at least 6 months, and suffering chronic phantom limb pain.

Globally, the study will examine at least 50 patients.

“The preliminary evidence suggests that this is a successful method. Whether it’s more successful than mirror therapy remains to be seen,” said Sensinger.