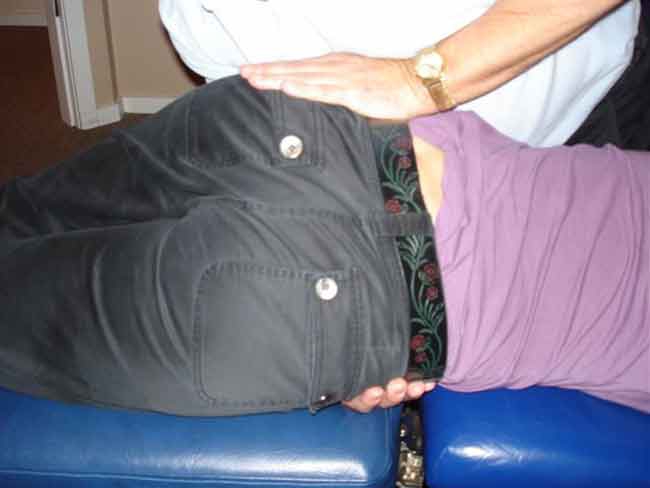 Set-up for adjusting pelvic long axis rotation with listings ASEX left side and PIIN right side. The doctor’s dominant hand reaches under the pelvis.

In my third year of practice my dear late mother asked me if I regretted not becoming a medical doctor. I told her, “No, mom, I will help more people with their health over my career than I would being a MD.”

Now in my 25th year as a DC I know that more than ever.

When I was 20 years old I broke my neck in a diving accident. I spent four days on the couch in a tremendous amount of pain. Our family didn’t go to chiropractors at the time, but I had heard about them and sought help from a doctor in Winnipeg where I lived.

X-rays showed a compression fracture of C5, and Dr. Gus Lodewyks told me to go to the hospital immediately. He also said to return to his office the next week if I was not hospitalized. More X-rays, a rigid cervical brace, and a consult with an orthopaedic surgeon came next.

After some adjustments that relieved me of most of my pain, I attended the surgeon again. He was furious I was seeing a chiropractor and flabbergasted that I was so improved. “If you want to die or be paralyzed, keep on with the chiropractor,” he said.

I was to have a spinal arthrodesis (spinal fusion) of C5-C6. I returned to Lodewyks, my chiropractor, who explained my fracture was stable and did not require surgery. My decision to stay on with chiropractic care and reject surgery was a pivotal one that changed my life forever. (You can read more about my story on my website: fillupyourtoolbox.com)

After getting well and seeing all the people I referred to chiropractic get better, I decided I wanted to be a DC.

Lodewyks became my mentor and took me to my first Gonstead seminar in Mt. Horeb, Wis. He coached me to adjust his neck a la cervical chair on the evening of my first seminar. After a couple of hours of trying, I made his lower neck move. I was thrilled and went on to study more Gonstead and many other techniques while at Palmer College.

By the end of my first year there, I was holding workshops at my apartment teaching other students how to do palpation exams, cervical chair adjustments and side posture adjustments.

Knowledge sharing
The skills and techniques we have learned become part of our repertoire, our technique toolbox. If Lodewyks did not have his technique I would have been out of luck and would have succumbed to surgery. My life would have been vastly different.

My practice became busy early on and I noticed I started solving problems in the adjusting room with techniques and protocols that were a synthesis of all the approaches I had learned, plus some innovations that I developed myself.

I have been teaching “Fill Up Your Toolbox Chiropractic Technique Seminars” for nine years now and, by and large, it has been very well-received by the 100 or so chiropractors who have attended. I would like to share some of these techniques in the hope that readers might learn something from my experiences.

Somewhere in the ’90s I was scratching my head wondering what to do next with a patient’s difficult acute low back. The adjustments I tried were not effective. It struck me that the pelvis was rotated around the long axis. I decided to try something I had never done before – and it worked.

The following is a description of an adjustment that helps to correct sacroiliac rotation around the long axis. It is best used after you have done the usual initial corrections to lumbar and/or sacroiliac joints yet there is still a degree of dysfunction.

The pelvis can be considered to be like a ring that can misalign on the sacrum rotating around the long axis. It is a unique procedure that I have used daily for the last 10 years. This adjustment is easy to master and will be a useful tool in the chiropractor’s repertoire for the correction of the pelvic subluxation complex.

The configuration of the sacroiliac joints will be described using the posterior/inferior iliac spine (PSIS) as per Gonstead listings. The sacroiliac PSIS is found to be exteriorly rotated on one side (EX) and interiorly rotated (IN) on the other side. Palpation of sacroiliac space between PSIS and sacrum on leg extension will be open or wider on EX side, while closed or narrower on IN side. Palpation tip: the lighter the touch, the better you will detect the EX and IN sides. The PSIS of the EX Ilium is also rotated anteriorly and superiorly (ASEX) and posteriorly and inferiorly on the IN side (PIIN). The PIIN ilium will present with a shorter leg length on that side and longer leg length on the ASEX side. The overall finding is rotation of the sacroiliac joints around the long axis with the listing ASEX on one side PIIN on the other.

Note that this adjustment is not used for the listings PIEX/ASIN on the respective sides because of the orientation of the joint planes. If the leg length difference is negligible (minimal AS/PI) with EX/IN this adjustment may be applicable.

Most often, this adjustment is indicated when after using the usual methods of correction (i.e. side posture and/or drop-piece adjustment), there remains sacroiliac fixation or restriction.

This adjustment can also be used to correct the pelvis alone, especially when the patient does not tolerate or respond well to the side posture adjustment for the listings ASEX/PIIN.

In summary, the doctor will be looking for:

Set-up for adjusting pelvic long axis rotation with listings ASEX left side and PIIN right side. The doctor’s dominant hand reaches under the pelvis.

The adjustment
Patient is prone on an adjusting table equipped with a pelvic drop-piece. The crest of the Ilium is approximately five centimetres caudad to the level of the gap between the thoracic and pelvic drop-piece.

The doctor stands facing the patient on the side of the ASEX Ilium approximately at waist level.

Inform the patient that the doctor will be placing his or her arm under the patient’s waist at the level of the beltline. This will be at least three inches or more cephalad to the symphysis pubis.

The dominant arm reaches under the waist at the level of the anterior superior iliac spine (ASIS) with hand contact and fingers wrapped around the anterior portion of the iliac crest and ASIS of the PIIN or IN ilium. Fingers are pointing slightly caudally and medially on the PIIN or IN ilium side. The other hand is contacting the ilium on the ASEX side or EX side, lateral to the sacroiliac, fingers directed caudally and medially with fleshy pisiform resting on the iliac notch.

Note that the doctor must obtain informed consent for the arm positioning under the waist after informing the patient that the procedure is to correct their pelvis.

First, show the patient where your arm is going to be placed, then get consent (patient initial beside brief outline of procedure, ex. “permission to perform adjustment for pelvic rotation around the long axis.”)

The adjustment involves dropping the pelvic piece using three to five lbs. of pressure, two to three times with emphasis on correcting the EX and IN rotation, while also correcting for AS and PI on the respective sides. The doctor places the pelvis in slight rotation to accomplish the untwisting of the rotation around the long axis on the ASEX/PIIN sides.

Post-check
The post-check for this adjustment, if successful, will show a significant improvement in active leg raising ability while lying prone, greater than the improvement from the side posture or drop-piece adjustment alone.

Unique results
The doctor’s hand placement, position of pelvis, use of the drop-piece and the fact that the pelvis is floating in a non-weight bearing position, allows an effective shearing force through the sacroiliac joint. The beveled surfaces of the sacroiliac joints and the line of drive through the joint plane line are very amenable to correcting the Gonstead listings in four directions simultaneously.

If you try this procedure, and you find it effective, please email me with your feedback at wellness1@shaw.ca.

You can view a video demonstration on YouTube by typing in the search phrase, “P Hunter’s adjustment.”

Whether you like this technique or not, your feedback is appreciated. Send me an email at fillupyourtoolbox@gmail.com

Dr. Paul Hunter, DC, is a 1989 graduate of Palmer College in Davenport, Iowa. He operates a successful private practice in Victoria, B.C. and teaches the “Fill Up Your Toolbox” chiropractic technique seminars.
Print this page