The Beautiful Game of Soccer

Ten days of soccer in Germany took the world’s attention. 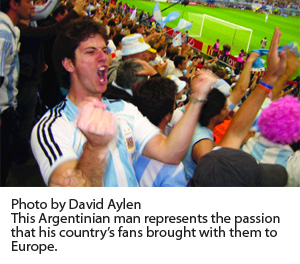 The FIFA World Cup comes around only once every four years, so the month-long soccer tournament this summer in Germany had over two billion TV viewers worldwide perched on the edge of their seats.  The 2006 FIFA World Cup drew together 32 teams, 736 players, and live crowds totalling more than three million.

My fiancée and I flew to Germany on June 9, which was the opening day of the World Cup.  We didn’t go in any professional capacity, but purely as fans of the game.  Into the airport at Frankfurt we arrived, along with throngs of people sporting their national jerseys.  They came from South America, Central America, North America, Africa, Asia, Australia and New Zealand, and from all over Europe.  Everyone was rushing to get on their way to whatever German city their team was playing in.  England was taking on Paraguay that day in Frankfurt, so we headed down to the big screen that was set up by the river.  Stepping off the subway, we were quickly immersed in the much-anticipated energy of the World Cup.  From 10 blocks away, we caught sight of dozens of England jerseys scurrying about, and that number became hundreds as we neared the water.

Instead of one big screen, there were actually 14, stretching all the way along the river.  Two huge, double-sided screens were erected right in the river.  Thousands of English soccer enthusiasts were singing, drinking, and kicking soccer balls in the street.  The energy, which could have been cut with a knife, was unbelievable.  The big screen events, or Fan Fests, held approximately twice as many people as the stadiums did.

On the big screens, we watched Sweden vs. Trinidad and Tobago, as well as Argentina vs. Ivory Coast.  For the smallest country ever to qualify for a World Cup in soccer, Trinidad and Tobago, with its population of one million, produced hundreds and hundreds of supporters.  They filled up the hotel we were staying at, flashing their national colours of red and black.

In the days that followed, we travelled north to a small town to visit some relatives and catch some live games with them in Gelsenkirchen.  We would then take in the other games of the day at the Fan Fests, which were situated near the local stadiums.  Everyone would hang on every move of the players on the field or up on the screens, with the exception of one of the live games for which we had tickets.  During the Argentina vs. Serbia and Montenegro match, we were seated about 10 rows behind the latter team’s net.  The hordes of Argentinian fans generated incredible excitement with their national songs, beating of drums, and dancing in the stands.  Generally, though, the partying didn’t happen until the games were over.

THE BERLIN MILE
We were again awed by the pure emotion the games created at the Fan Fest in Berlin, which became known as the “Berlin Mile” due to the swarming lineups. Scottish fans greeted us, wearing their kilts and playing bagpipes, even though Scotland hadn’t even qualified for the tournament.

Swedes sang their songs at halftime, and Irishmen dressed as leprechauns graced the beer gardens with their presence.  It was a powerful celebration of national pride, love of soccer, and the best that human beings can offer.

As Canada prepares to host the FIFA Under-20 World Cup in 2007, we will witness the spirit of soccer rise.  As much as we are a hockey nation, more kids play soccer in organized leagues than they do any other sport.  This helps to put us on stage with every other country where soccer (futbol, football, or fusbol) is so appreciated.

As a soccer player, coach, fan, and team chiropractor, I would truly love to see chiropractic internationally allied with this enormous entity, the beautiful game.•

Related
Watching hockey game can be heartbreaking, literally: study
Soccer headers may be linked to balance problems
Editorial: Game changers
A computer game can be used to train its players to eat less sugar to reduce weight and improve health