Features Business Management
The Demise of the DACs 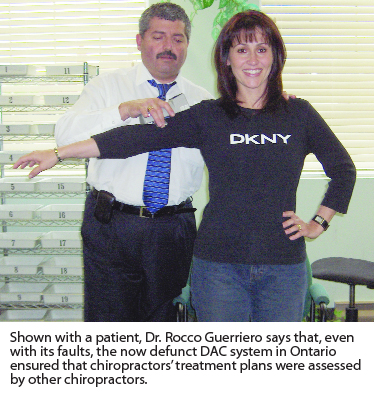 March 1, 2006, was the day that the DACs became WADs.  WAD stands for “Was a DAC.”  There were 103 regionally based DACs across Canada.  DAC stands for Designated Assessment Centre.  DACs were established by the NDP government in the fall of 1993, and became effective on January 1, 1994.  This was the start of neutral assessments of auto insurance claimants here in Ontario.  The purpose of the DACs was to provide a neutral assessment, when there was a dispute between the insured person and the insurer.  There were five different types of DACs: Medical and Rehabilitation DAC, Disability DAC, Attendant Care DAC, Catastrophic DAC, and Residual Earning Capacity DAC.  If there was a dispute about any of these benefit types, then the insurer had to send the claimant to the closest DAC or, more recently, a mutually agreed upon centre.  The system was neutral, as neither the insurer nor the insured person could unilaterally select a DAC.  The DAC reports were binding, pending further dispute resolution (i.e., arbitration).  There was “certainty in the system,” said one Financial Services Commission of Ontario (FSCO) arbitrator.

The purpose of the DACs was to provide a neutral assessment, when there was a dispute between the insured person and the insurer.

Just as a hockey referee takes some heat, there was criticism of the DACs from both sides.  The plaintiff bar represented by the Ontario Trial Lawyers Association (OTLA) criticized the DACs as being biased if they also did insurer examinations.  Insurers and insured persons griped that DACs were not meeting timelines.  The Insurance Bureau of Canada (IBC) complained that DACs were costly.  The medical profession (Ontario Medical Association and Canadian Society of Medical Evaluators) didn’t like it that medical doctors were not getting as much work as allied health professionals.

Nevertheless, the DACs survived for over 12 years, through three different regulation/legislation changes in auto insurance in the province of Ontario.  The system was introduced with Bill 164 in 1994.  In 1996, the DACs went through change with Bill 59, and the introduction of the Minister’s Committee on the DAC System.  This committee, with representation from all stakeholders, had substantial power to regulate DACs and their assessors.  Finally, in 2003, DACs were reformed with the introduction of Bill 198.

The DACs were represented by the Association of Designated Assessment Centres (ADAC), of which I was the first president, as well as being the DAC representative on the minister’s committee for more than eight years.  The minister’s committee was put in place for quality assurance, and to develop and implement guidelines for DAC assessments, recommend fees, and oversee complaints.  The stakeholders were content for another six years.

In 2002, the Insurance Bureau of Canada (IBC) approached the Conservative government in Ontario to alter the system yet again, arguing that med/rehab benefits had skyrocketed to $1.6 billion dollars per year in Ontario alone.  IBC wanted greater control of assessments, as these costs were also escalating, as well as containment of the system’s abusers or opportunists.  This brought about the Unfair and Deceptive Acts and Practices (UDAP) ruling.

The outcome of these consensus-based discussions between the health-care community  (coalition) and IBC was the instituting of: Pre-Approved Frameworks (PAFs); Request of Assessment and Approval Process; Fast Track DACs; Professional Services Guideline (fee caps); and Limitations in Insurer Examinations (predominately affecting MDs).

The system introduced by Bill 198 came into effect on October 1, 2003, and it seemed to be effective since med/rehab and assessment costs decreased by 50 per cent.  Under the Fast Track DACs, the timeline was streamlined to five days, and fees were fixed at $450.

Everyone was happy with the latest DAC system, except IBC, which wanted to negotiate all DAC fees, not just the Fast Track fees.  Unreasonably, IBC wanted lower payments for DAC assessments than for insurer examinations, which would have created an uneven playing field for DAC assessors.

LOBBYING THE LIBERALS
During the summer of 2003, IBC joined forces with the legal and medical communities to lobby the Liberals to get rid of DACs, if that party was to be elected to power in the upcoming fall election.  IBC wanted control of assessments and costs, and the legal community sought a more adversarial system, for its own benefit.  The medical community wanted more insurer examinations, as the insurer gets to choose the type of professional and the specific assessor performing them.  Then, a group of rehab providers also got involved in the fracas.

Mr. McGuinty and the Liberals made a pre-election promise based on false data and biased information supplied by all of these lobby groups.  The DACs were doomed.  The Liberals took power in Ontario in October 2003.  The following March, they proposed a new model of assessments called the Expert Assessor Network (EAN), which would have made medical doctors the gatekeepers of all assessments.  The public consultation process reviewed 125 submissions from various stakeholders.  Philippa Samworth, the defence lawyer hired by the Liberal government to oversee the consultation process, submitted a report to the government that showed the consensus was in favour of a neutral assessment process as well as a streamlining of assessments.  There was major concern that the EAN model was not viable, especially as there was already a shortage of doctors in public health care.  The EAN model was scrapped, and it was back to the drawing board.

In December 2004, the Liberals proposed draft regulations to replace DACS with insurer examinations.  I was part of a three-way debate on national television with Mr. Mike Colle, a Liberal MPP, and Mr. Robert Munroe, OTLA president.  The politician accused DACs of working as a monopoly and “poking and prodding people for a year.”  The lawyer jumped on the bandwagon and said that chiropractors should go back to treating people instead of doing assessments.  But it was obvious even to the TV commentator that this was a ploy between insurers, lawyers, and the government to get rid of the DACs.  It demonstrated that our form of democracy does not necessarily lead to good policy development.

ADAC lobbied strongly, attacking the government for taking away consumer protection and creating a David and Goliath scenario.  The Liberals persisted and proposed new draft regulations in the summer of 2005 to substitute insurer examinations for DACs.  As a demonstration that there was some neutrality in the new system, the insured person’s practitioner would be permitted to file a rebuttal assessment/report if an individual’s benefit was denied.

WHAT ABOUT THE CONSUMER?
Who loses?  The consumer does.  A poll sponsored by ADAC in January 2005 indicated that 93 per cent of consumers want neutral assessments.  A financial cost analysis done by Ernst and Young indicated that the new Liberal government model would actually increase costs by $35 million per year.  (This information is found on the ADAC website, www.adac.ca.)  This is a poorly thought-out system that quite likely will not last more than two or three years.

Since the DACs’ fate was sealed, there has arisen a movement amongst insurers in Ontario towards a “Preferred Provider Network,” which would direct claimants to those health-care professionals who are on individual insurance companies’ rosters.

In Alberta, some neutrality was injected into the assessment process in October 2004.  If an insured person and an insurer cannot agree on an assessor, then the Superintendent of Insurance in that province determines who will do the assessment.  Hmmm, this sounds curiously like the DAC system that Ontario just scrapped.

Though not perfect, DACs were preferable to what was introduced on March 1.  Chiropractors associated with DACs were important players on the multidisciplinary teams that performed assessments.  There were chiropractors acting as consultants in the major hospitals where assessments were performed, even though some hospitals initially resisted having chiropractors on their team.  In our profession, it is better for a chiropractor to assess another chiropractor’s treatment plan than to have it done by an orthopedic surgeon or neurologist, who may be biased against chiropractic.•


Related
10 things you can do to protect against insurance fraud
Editor’s Note: April 2006
New research aims to find better ways for managing back pain
GST and Assessments