July 28,
Minneapolis, MN – Chiropractor and author, Dr. Michael Flanagan announces the
publication of his book titled The
Downside of Upright Posture: The Anatomical Causes of Alzheimer’s, Parkinson’s
and Multiple Sclerosis,(Two Harbours Press), a culmination of two decades
of work. 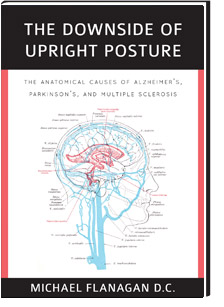 In this
book, Dr. Flanagan makes a compelling case for an anatomical cause of these
three neurodegenerative diseases.  He
tells the story of how he stumbled upon an apparent connection, due to upright
posture, between the design of the human skull, spine and circulatory system of
the brain and a predisposition to neurodegenerative conditions.  Over the course of two decades, he
investigated this connection until it became clear that there was an
unmistakable link between upright posture and the neurodegenerative diseases
seen in aging adults.

Having
already published multiple articles on his findings throughout his career, Dr.
Flanagan takes a more comprehensive approach in The Downside of Upright Posture,

including
not only the details of his findings and his story of discovery, but also his
thoughts on the larger evolutionary and future implications of his work.

Dr.
Michael Flanagan graduated with honours in 1978 from Sherman Chiropractic
College with a primary
focus on corrective care of the upper cervical spine.  Dr. Flanagan published his first paper on the
potential role of stenosis of the neural canal in normal pressure hydrocephalus
(NPH) and Alzheimer’s disease in 1989.
He later published articles on the link between upright posture and
other neurodegenerative diseases, such as Parkinson’s and multiple
sclerosis.  In 1990, he became board
certified in chiropractic neurology.

Comments on the book

“You did an outstanding job.  Like you, we believe that venous drainage
plays an important role in the regulation of intracranial pressure.”  Dr. Noam Alperin,
Department of Radiology, University
of Miami.

“Your book is a grand achievement,
discussing complex concepts in a way an average person can understand – all
around a story that keeps you reading until the end.” Dr. Charles Woodfield of the National Upper Cervical Research
Foundation.

“I found it very interesting and I
am sure it will promote further discussion and further investigation…Congratulations
on this marvelous contribution to science and clinical applications.”
Ted Carrick, DC,
PhD.

For more
information on The Downside of Upright
Posture, or Dr. Flanagan, please visit www.uprightdoc.com