The endocannabinoid system’s role in pain and inflammation

(And a rant about the cannabis industry and legalization) 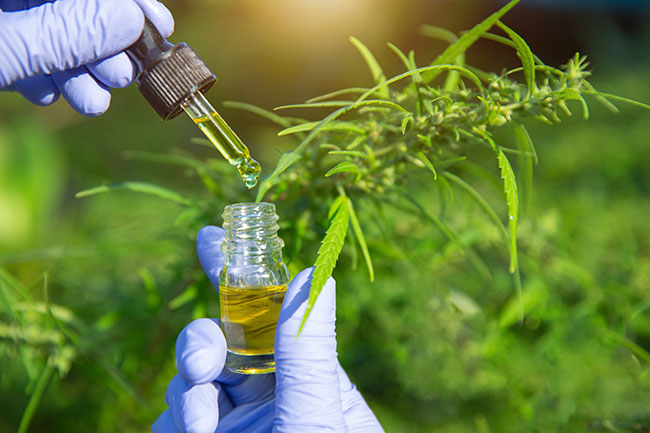 Since the identification of endocannabinoid receptors, the analgesic properties mediated by the endocannabinoid system have been an area of great interest, however, despite the therapeutic appeal, the use of cannabis-based medicines in clinical settings is complicated by the psychoactive side effects of THC and has resulted in hesitancy in their use.

The goal of this article is to briefly discuss the issues with product development in the cannabis industry that has emphasized high THC content and to then discuss the role of the endocannabinoid system in pain and inflammation. Future articles will discuss non-cannabis compounds that possess cannabimimetic properties and can be accessed by other health care professionals other than MDs and Nurse Practitioners, who are currently the only health care professionals that can authorize medical cannabis access.

My issues with cannabis legalization and the cannabis industry
If you’re not an MD or Nurse Practitioner, you probably wrote off cannabis as a viable therapeutic product a long time ago. When the federal government limited the ability to authorize medical cannabis to those two professions, regulatory colleges were left in the position of having to go through the surreal process of navigating the federal process for adding their profession to the list. I was involved in the process as a member of the cannabis task for the college of naturopathic physicians of BC and still have the scars on my forehead from banging it repeatedly against that brick wall.

Canada had permitted cannabis for medical use since 2001 and many patients had experienced relief from chronic conditions that had been resistant to other therapies.  There was much hope that legalized cannabis would usher in a period of innovation and product development for medical cannabis products.  In 2018, Canada legalized cannabis to much national and international fanfare. However, the Canadian experiment hasn’t quite turned out as many had hoped.

The so-called “green rush” started, and production went into overdrive. Stock prices soared and fortunes were staked, made, doubled, and tripled in an atmosphere reminiscent of the 90s dotcom boom, or the Yukon gold rush of the 19th century, when 100,000 prospectors headed into the Canadian hinterlands in search of riches. Many firms hoped to corner the Canadian market by throwing millions of dollars of shareholders’ money into massive grow sites.

Now, as companies struggle to reach profitability, product development has devolved to one simple factor – how to get people higher, faster.

Having worked in the industry since 2014, I spent years trying to set up product innovation strategies that emulated the evolution of herbal medicine manufacturing.  It’s not complicated… it required looking beyond THC content and, instead, investigating the many medicinal compounds that the cannabis plant makes that are not intoxicating. However, this required time and dollars and, as financial pressures began to build and stock markets began to turn negative on the industry, companies shifted focus to the most readily available market – the recreational consumer.

One of the main goals of the legislation was to force black market producers out of business by supplying a regulated supply of cannabis.  Now, in 2022, the black market is still vibrant while cannabis stocks have crashed, medical patients say they can’t get hold of essential medicines, and thousands of jobs have been lost.

In a stinging irony, medical patients – the very people whose decades of activism had driven the wider reforms, watched as suppliers diverted their medical product in bulk to the new recreational market rather than in hundreds of smaller deals to medical patients.

This combined with a confusing, bottlenecked distribution and retail system has meant that many medical patients have moved back to the black market to find product that meets their needs. 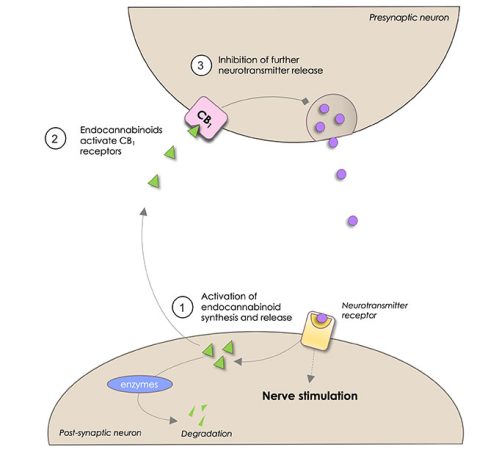 The endocannabinoid system
The body has multiple systems that help regulate and maintain normal housekeeping – nervous, circulatory, immune, endocrine, and gastrointestinal systems, to name a few. These systems not only modulate different tissues and organs to function properly, but also facilitate communications both within the system and with other systems.

As recent as the 1990s, another system was identified and termed the Endocannabinoid System. It also helps with communication, and it prepares the body against attack by a variety of harmful insults: stress, carcinogens, pain, inflammation, infections, UV damage, etc. Initially the definition was confined to what was referred to as the endocannabinoids (ECs), that being two molecules – arachidonoylethanolamide or anandamide (AEA) and 2-arachidonoylgycerol (2-AG) – produced by the body which acts on the two cannabinoid receptors (CB1 and CB2) located throughout the body (mainly the central nervous system and immune system, respectively). The enzymes that help in the synthesis and breakdown of ECs, FAAH and MAGL, were included as part of the system.

In comparison to classical neurotransmitter systems, the EC system possesses several unusual properties from which its key role in the control of nociception is derived. Perhaps the most important of these features is the positioning of the EC signalling machinery at neuronal synapses in pain processing pathways.

ECs are predominantly retrograde neurotransmitters, synthesized in the postsynaptic cell and released into the synapse to travel across and interact with receptors on the presynaptic cell resulting in an inhibition of neurotransmitter release. Since ECs are not stored in vesicles prior to release, but instead are produced through activity-driven “on demand” synthesis following strong neuronal activation and/or activation of receptors, their signalling is uniquely positioned to act as a brake on neuronal signalling in response to high activity. In pain pathways, this manifests as antinociception or analgesia.

Given that the tissue concentration of ECs, the size of the metabolic enzyme pool, and the expression levels of EC-sensitive receptors can all vary with changes in physiological and pathophysiological state, this property produces a dynamic lipid network capable of exquisite ﬁne-tuning of cellular signalling

Cannabinoid Receptors
There are two known cannabinoid receptors that have distinct and separate physiological roles. The CB1 receptor is found both in the periphery and central nervous system (CNS), although expression in the CNS is far greater. CB2, in contrast, is typically expressed predominantly by cells of the immune system, including glial cells of the CNS.  The CB1 receptor is the most abundant receptor in the CNS and is highly expressed in the neocortex, cerebellum, and limbic regions, but is also expressed in the peripheral nervous system (PNS). At peripheral and central terminals of nociceptive sensory nerves, CB1 gates the transduction of peripheral noxious stimuli into central neuronal pain signals. In contrast to the almost ubiquitous expression of CB1 in the nervous system, CB2 expression is thought to be conﬁned to immune cells such as macrophages, lymphocytes and mast cells in the periphery and astrocytes and microglia in the CNS. Activation of CB2 is inhibitory, mediating the well-characterized anti-inﬂammatory effects of the ECs as well as having a role in anti-hyperalgesia in inﬂammatory pain states.ii

There is a significant amount of preclinical evidence indicates that cannabinoids produce antinociceptive effects in inflammatory and neuropathic rodent pain models. Cannabinoid receptor agonists, endocannabinoid-regulating enzyme inhibitors, and other pharmacological strategies to manipulate the endogenous cannabinoids system decrease the hyperalgesia and allodynia induced in diverse inflammatory and neuropathic pain states.

Anti-nociception refers to the act or process of blocking the detection of painful or harmful stimuli by sensory neurons, thereby reducing ones sensitivity to pain. Preclinical studies of systemically administered cannabinoids have noted anti-nociception as a prominent feature in various models of pain.iii

The analgesic effects of cannabinoids and their ligands are primarily mediated by the cannabinoid receptor 1 (CB1) via inhibition of presynaptic gamma-aminobutyric acid (GABA) and glutamatergic transmission. Within the nervous system, GABA transmission suppresses neuronal excitability.

The results of clinical studies consistently demonstrate the efficacy of cannabis and cannabinoid receptor agonists in reducing diverse neuropathic pain states in humans. However, adverse effects associated with use of “medical cannabis” as well as challenges in ensuring standardized plant constituents and concerns related to inhaling combustion products of smoked cannabis are significant issues iv 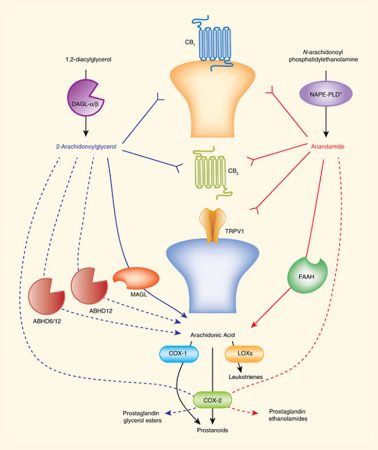 The Role of the ECS in Neuropathic and Inflammatory Pain
Chronic pain, whether inflammatory or neuropathic, is a complicated condition that not only diminishes the quality of life but also comes at great economic cost. The mechanisms of pathological pain are complex and characterized by both peripheral and central neuronal alterations and neuroimmune activation, which modulates in the initiation and maintenance of chronic pain.

After an injury, neuronal inflammation and repair mechanisms of neural tissues induce a state of peripheral hyperexcitability in nociceptors that synapse with neurons found within the dorsal horn of the spinal cord. This hyperexcitability leads to loss of activity of inhibitory neurons that results in a dramatic functional alteration of neurons in the dorsal horn of the spinal cord. When this loop persists in an enduring way, it results in a persistent pain, which is often resistant to treatments.v

Endogenous cannabinoids (Anandamide and 2-AG) are enzymatically regulated, produced, and released on demand. These endocannabinoids activate CB1 and CB2 receptors. Another important pathway involves the binding of Anandamide which activates transient receptor potential cation channel subfamily V member 1 (TRPV1) which is a key point of intersection between the nervous and immune systems

The peripheral nervous and immune systems are traditionally thought of as serving separate functions. However, nociceptive neurons possess many of the same molecular recognition pathways for danger as immune cells and in response to danger, the peripheral nervous system directly communicates with the immune system, forming an integrated protective mechanism. The dense innervation network of sensory and autonomic fibers in peripheral tissues and high speed of neural transduction allows for rapid local and systemic neurogenic modulation of immunity. Peripheral neurons also appear to play a significant role in immune dysfunction in autoimmune and allergic diseases.vii

The endocannabinoid system sits at the crossroads of these two systems.  Inflammatory cytokines Interleukin 1 beta and TNF-alpha are two important cytokines released by innate immune cells during inflammation and key signalling molecules between immune cells and nociceptor. Activation of cytokine receptors result in the activation of signal transduction pathways in sensory neurons leading to downstream activation of nociceptive TRP and voltage-gated channels. The resulting sensitization of nociceptors means that normally innocuous mechanical and heat stimuli can now activate nociceptors.viii

TRPV1 Receptor
The capsaicin receptor TRPV1 is an important element for a broad range of seemingly unrelated chemical and physical noxious stimuli, including heat and altered pH.

The sensitivity of TRPV1 to noxious stimuli, such as high temperatures, is not static. Upon tissue damage and the consequent inflammation, several inflammatory mediators, such as various prostaglandins and bradykinin, are released. These agents increase the sensitivity of nociceptors to noxious stimuli. This manifests as an increased sensitivity to painful stimuli (hyperalgesia) or pain sensation in response to non-painful stimuli

TRPV1 is thought to be a major transducer of the thermal hyperalgesia that follows inflammation and tissue injury. Desensitization of nociceptive neurons to TRPV1 agonists (e.g., capsaicin) as an alternative pharmacological approach to block pain in the periphery where it is generated.ix

TRPV1 agonists fall into two classes, the pungent or caustic substances (capsaicin, piperine), and those that are non-irritating (CBD). While the former substances cause pain upon application, continued exposure to TRPV1 agonists cause conformational change in the receptor and a refractory state due to desensitization of the receptor, making them functional antagonists upon chronic application.x

The results of clinical studies consistently demonstrate efficacy of cannabis and cannabinoid receptor agonists in reducing diverse neuropathic pain states in humans. However, adverse effects associated with use of ‘medical cannabis’ as well as challenges in ensuring standardized formulations developing the entire plant as medicine.

i. Barrie, N. & Manolios, N. The endocannabinoid system in pain and inflammation: Its relevance to rheumatic disease. European J Rheumatology 4, 210–218 (2017).

ix. Kissin, I. and Szallasi, A., 2011. Therapeutic targeting of TRPV1 by resiniferatoxin, from preclinical studies to clinical trials. Current topics in medicinal chemistry, 11(17), pp.2159-2170.