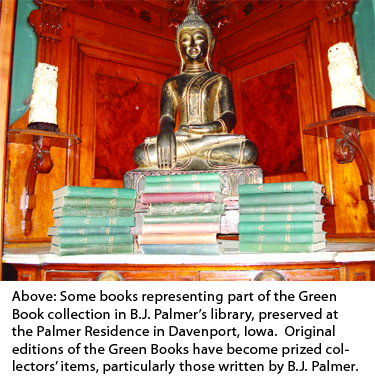 The Green Books is the epithet for those frequently misunderstood, misconstrued, misquoted and simply missed-out-on books that were so material to the development of our profession.

What are the Green Books?  The answer is not as obvious as you may think.  I have asked chiropractic historians, and librarians, and philosophic scholars what makes a chiropractic book one of the Green Books and how many of them there are.  Their answers were multifarious due to differing inclusion criteria.

Many suggest that they were the books written by Dr. B.J. Palmer.  The majority of the books were written by B.J., others by Palmer family members, and still more by prominent faculty members of the Palmer School, with B.J.’s blessing.

Others say the Green Books are defined by the distinctive dark green binding from which the books derive their name.  Interestingly, there are up to 11 books that are frequently referred to as Green Books that were not bound in green.

Another definition comprises the books that were printed at the Palmer School of Chiropractic Printery (one of B.J.’s many business ventures).  In fact, most of the Green books were not printed at the PSC printery, but off campus.  Only later volumes and editions were printed in-house, perhaps due to a lack of necessary equipment to bind large books in the early years, or perhaps because the printery was overrun with other chiropractic printing orders.

Qualification and quantification aside, the Green Books are sadly a frequent source of acrimonious semantic battles.

Even if there were consensus as to the criteria for inclusion, getting a count is still not as easy as one might think.  There appeared to be some confusion concerning what constituted a new edition; some were referred to as editions when they were just another printing.  Confounding the problem was that some volume numbers were reused (3, 4, 14, 37) and there are at least two volume numbers for which I have never seen a book (30 and 31).  There are also some unnumbered volumes such as Pharaoh’s Correlative Hygiene, and the monumental book by Canadian-born Dr. D.D. Palmer, Textbook of the Science, Art, and Philosophy of Chiropractic for Students and Practitioners, commonly referred to as “The Chiropractor’s Adjuster.”

Qualification and quantification aside, the Green Books are sadly a frequent source of acrimonious semantic battles.

ACCEPTANCE OR REJECTION?
Common in our profession, especially among those seeking an “accepted” and possibly subordinate role in today’s health-care arena, is to be dismissive of the philosophy of chiropractic.  They might say that the Green Books espouse early chiropractic philosophy; therefore they must be rejected in their entirety as antiquated dogma.  Detractors frequently search for conflicting thought processes in different volumes to be pointed out as philosophical weakness, or, equally as damning, misinterpreting the context to suit their agendas.  For example, it is common to hear chiropractors utilize one of D.D. Palmer’s most famous quotes from his pre-mentioned 1910 book to justify a myriad of questionable therapeutic applications: “I have never found it beneath my dignity to do anything to relieve human suffering,” without acknowledging the second line, “The relief given bunions and corns by adjusting is proof positive that subluxated joints do cause disease.”

Other chiropractors look to the Green Books as completely authoritative, a viewpoint also not without problems, as it effectively stops philosophical dialogue.  This attitude can be as destructive as dismissing the Green Books, since such polarization precludes advancements in the philosophy of the profession.

To completely accept or reject the philosophical content of the Green Books is an example of anti-intellectualism.  The books show the evolution of chiropractic philosophy, heavily influenced by B.J. Palmer.  B.J. was not static in his reasoning or pursuit of wisdom.  Why should we be?  Read the Green Books, question the concepts, and debate them within a rational discourse.  The Green Books are not antiquated dogma unless their contents are accepted without question or rejected without due consideration.

The most comprehensive bibliography of the Palmer Green Books can be obtained from the Wiese and Lykins article appearing in volume six of Chiropractic History published by the Association for the History of Chiropractic, or at the Palmer College of Chiropractic website (www.palmeredu.com), found under the library’s special collections.  The most cost-effective and efficient way to explore the contents of the Green Books is to
utilize the Green Books on CD-Rom, which includes a search engine. It is produced and distributed by Dr. Robert Sinnott, who can be contacted at chirobooks@sbcglobal.net.