Posture begins in the feet.

The goal of most chiropractic technique systems has been to understand how the spine works and how it relates to the nervous system, and to develop technology that will restore normal function.
The assessment of posture is a classic chiropractic protocol, and a great place to start.  In the standing postural examination, we can see and measure the effects of gravity on the bipedal neuromusculoskeletal apparatus.  Because posture begins in the feet, the clinical examination should start from the ground up.  This article will address aspects of the relationship between feet and posture.

Whenever there is a foot imbalance of any type, there will be repercussions to the lower limbs, pelvis and spine.  The most common imbalances are seen in fixed and excessive pronation or supination, and altered arches.  Over-pronation is most prevalent, followed closely by over-supination, and often both are present in the same patient.  The dropping of the medial and lateral longitudinal arches, along with flattening of the transverse arch of the forefoot, are always present to varying degrees in pronation and supination distortions (Figure 1).

Pronation and supination are normal to the foot, and play significant roles in the modulation of lower limb and spino-pelvic dynamics, especially the sacrum.  This is easily tested on ourselves by placing our hands on the greater trochanters to feel what happens there when we pronate and supinate our feet.  Any change to our pedal stance changes the dynamics of the coxal joints and pelvis, and might shed some light on why so many of our patients do not “hold” the corrections made by excellent chiropractic care.

An understanding of this phenomenon led Monte Greenawalt, DC, the founder of Foot Levelers, Inc., to first develop the Spinal Pelvic Stabilizer in 1952.  At the time, very little was generally known about the intimate relationship between the spine and foot dynamics, but “arch supports” were popular with the public.  Greenawalt was determined to help chiropractors achieve better and longer lasting results with their patients.  During the ensuing years, our knowledge about custom-made orthopedic supports – orthotics – has expanded significantly.

A good orthotic will reposition the three arches of the foot to effectively remove over-pronation or over-supination as required.  It will assist in the correction of foot subluxations, and compensate for permanently over-stretched ligaments in the foot, and tarsal bones that, over time, have moulded to adapt to abnormal foot postures.

In building orthotics, there are two standard methods for casting or scanning the feet.  There are also a number of generalized, non-standard procedures that really produce an arch support rather than a true orthotic. 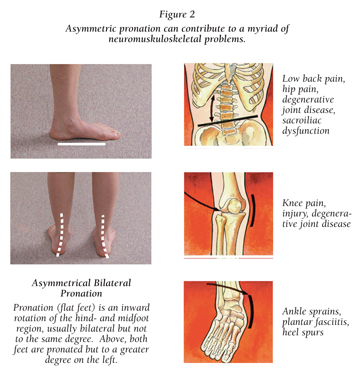 NON-WEIGHT-BEARING CASTS
Typically, a cast made of plaster or equivalent material is used to cast the foot in the “sub-talar neutral” which is the ideal biomechanical position.  To make a slipper cast, the orthotist manually positions the foot to remove all pronation or supination and “locks” the forefoot. However, attempts to determine the non-weight-bearing sub-talar neutral position can be difficult and subjective, and do not take talar subluxation or tarsal bone moulding into consideration.(1)  Once the foot has been cast, the orthotist must use accompanying clinical information to adjust the orthotic for the weight-bearing stance.  Then it must be decided if a post or a wedge of a specific size should be positioned under the medial or lateral side of the forefoot, or the rear.  Non-weight-bearing casts do not measure the effects of the alignment of the structures above the foot that can influence foot dynamics and position.  This results in the creation of a rigid orthotic that significantly reduces or removes pronation and supination, in an attempt to optimize the foot’s interaction with gravity.
Because a certain amount of both pronation and supination are necessary for shock absorbency, as well as synergistic alignment with the knees, and for coxal and pelvic articular dynamics, the work of the foot has is done by articulations higher in the kinetic chain.  This accounts for the significant number of patients using non-weight-bearing orthotics who have problems with their knees and pelvis.  It also demonstrates the role of foot dynamics in protecting the knees, coxal and sacroiliac joints.

WEIGHT-BEARING CASTS
In the weight-bearing approach, the patient is asked to stand in compressible foam, or be digitally scanned while standing on both feet, permitting a three-dimensional imprint.  This process more clearly identifies the actual degree of pronation or supination, and gives a clear picture of how the three arches of the foot are actually behaving in the weight-bearing environment.  Several studies have established that measurement of foot posture is more exact and clinically utilizable in the weight-bearing position.(2)(3)

The laboratory then can take a significant number of measurements to determine the optimal postings and wedges to be used to remove the over-pronation or over-supination, and to correct the medial, transverse and lateral arches.

The major advantage of the weight-bearing assessment is that it aims to only remove the excessive pronation and supination, and generally does not challenge the joints that are higher in the kinetic chain to redefine their articular behaviour.•