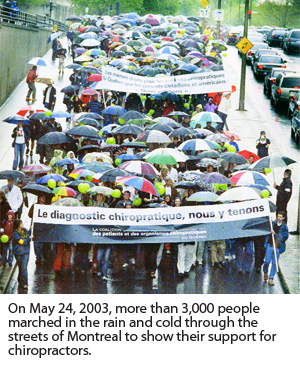 One of the conclusions of the Lacroix report on “chiropraxis” in 1964 noted the importance of the right to diagnose for the chiropractic physician. When the chiropractic program was established in 1993 at the Université du Québec à Trois-Rivières (UQTR), the minimum requirements set by the Council on Chiropractic Education of Canada (CCEC) relating to standards and regulations had to be met or exceeded.  The CCEC standards require that chiropractic students must obtain competency in diagnostic skills.  Given the legal right to diagnose, doctors of chiropractic in various jurisdictions, who operate under different professional laws, are considered primary contact practitioners.

In Quebec, chiropractic’s appearance at the university level created a real commotion in the medical and political arenas.  It eventually became clear that a fight was in the making.

Under the auspices of the provincial Ministry of Education, UQTR had to establish specific courses and laboratory diagnostic facilities on campus.  For the first years of the chiropractic program, patients were accepted without any problem at the University Chiropractic Clinic where interns, under clinical supervision, were able to order and interpret laboratory diagnostic tests.

Then, the Professional Code in Quebec came under review.  Following a request from the Collège des médecins du Québec, without warning, the Office des professions du Québec, the body that regulates all recognized professions in the province, announced that it would re-evaluate the UQTR chiropractic program.  Its representatives came on campus, toured the facilities and laboratories, and met with officials from the university’s administration and with directors of the University Chiropractic Clinic.  In a subsequent letter addressed to both parties, they ordered that laboratory diagnostic testing be stopped, stating that, by law, only medical doctors have the right to order and interpret such tests.  They also requested that the university remove from the curriculum the courses related to laboratory testing and diagnosis.  The UQTR administration was put into a very awkward position, needing to obey the law that governed professional affairs.  The Ordre des chiropraticiens du Québec (OCQ), which regulates the province’s chiropractors, immediately challenged the actions of the Office des Professions through a letter addressed to the Minister of Justice.

A legal request was submitted to the Quebec Superior Court on July 21, 2001, by the Association des chiropraticiens du Québec (ACQ) and by representatives of UQTR students, assisted by the OCQ.  This requête provisoire was presented to Justice Paul Vézina to oppose the steps taken by the Office des Professions du Québec and its president, Jean K. Samson.  The request was accepted by the court.

On August of that year, a press conference was convened to draw attention to several issues: the injustice being perpetrated upon the chiropractic profession; the necessity for protection of the public’s rights; and the need for the provincial government to fully recognize the scope of the chiropractic diploma.  Then ACQ President Dr. Mireille Duranleau used the occasion to inform the media about chiropractic’s challenge to the Office des professions du Québec.  The president of the chiropractic students association, Guillaume Corbin, was present, along with the ACQ’s legal team.

The unfolding story was scrutinized by the province’s media, which speculated that UQTR could lose its CCEC accreditation.  On- and off-campus student protests took place at UQTR. During the next winter and spring, a special committee formed by chiropractic patients organized a province-wide petition demanding that the right to diagnose be confirmed for chiropractors.  Meetings were held individually with political representatives in all of Quebec’s constituencies, and committee representatives attended various political conventions.  An impressive 124,000 signatures were added to the petition that was submitted to the Assemblée nationale du Québec on August 22, 2001.

Many chiropractors went to court to testify on behalf of the chiropractic profession, including: Normand Danis, DC, president of the OCQ; Mireille Duranleau, the ACQ president; Pierre Boucher, DC, PhD, president of the Fondation chiropratique du Québec; Gérard Bérubé, DC, former OCQ administrator; and Scott Haldeman, DC, MD, PhD, a leading chiropractic scientist, author, and educator.  On February 25, 2003, Mr. Justice Gilles Blanchet of the Superior Court of Quebec ruled against the chiropractic profession.  It was a major disappointment resulting in the dramatic events of May 24, 2003, when more than 3,000 people marched in the rain and cold through the streets of Montreal.  The crowd gathered in front of the premier’s office to demonstrate their support for chiropractors.

Under the leadership of Dr. Normand Danis, the profession decided to appeal the decision. Louise Taché-Piette, the legal advisor for the OCQ, reframed the chiropractors’ position.  Representatives of the Office des professions du Québec and the medical profession also appeared before the three judges of Quebec’s highest court.  In a stunning reversal, La Cour d’Appel du Quebéc overturned the previous Superior Court decision.  This was a resounding reaffirmation of chiropractors’ right to diagnose within their scope of practice, on the basis of clinical and radiological analysis, according to Quebec law.

Dr. Normand Danis, in speaking with the media, noted that the decision would serve as a catalyst for other issues facing the profession, such as the development of clinical research, diagnosis technologies, and direct access to chiropractic care for WCB and automobile accident victims.

This historic victory showed that external forces, including the medical profession, were once again unable to suppress chiropractic.  Back in 1905, it was bitter medicine for some medical doctors to accept that radiology was not their exclusive domain; a century later they had to concede diagnosis to chiropractors.  In the context of governmental reform of all regulation acts for Quebec health professions, chiropractic is now in a solid legislation position to ensure total access to differential diagnosis tools for chiropractic patients.•