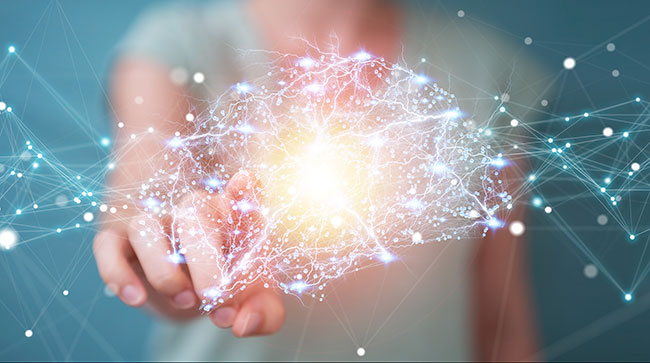 Let’s start with an experiment: If you can touch your toes, find someone who can’t. If you can’t, follow along. Stand with your legs together and flex forward, taking note of how far you can reach. Now, stand straight again, but this time, push the tip of your nose down gently one time and bend forward again. You were more likely than not flexed further by a substantial margin than you did the first time. While no one knows exactly why this works, this is part of a collection of very consistent mechanisms to influence how the brain can turn muscles on and off at whim. This is a typical example of the power of functional neurology.

According to José Palomar, MD, the creator of the Proprioceptive Deep Tendon Reflex® (P-DTR): Like in a computer, functional problems are 95% software, and only 5% or less are hardware. He says, “we need to have this in mind before we do surgeries, put joints in place, or release fascias.”

Broadly, functional neurology is the assessment and treatment of functional or non-pathological abnormalities in the brain, and the central nervous system using conservative methods. The focus is on identifying disconnect between what the brain is sensing and how it is responding or compensating to generate the patient’s symptoms. Simply put, it is identifying the ultimate “why” for some of the most complicated presentations that we see in our office.

Technically, the practice of functional neurology is a sub-specialty (in the United States) of chiropractic, or as a certified practice interest in other countries (which don’t recognize the specialty). Popularized by Dr. Ted Carrick in the 90s and 2000s for chiropractors, techniques and educational programs have arisen directed at chiropractors, medical doctors, physiotherapists, RMTs, and strength and conditioning trainers. Here we discuss the more common techniques.

This program traditionally leads to the Diplomate of the American Chiropractic Neurology Board (DACNB). Candidates can take an exam following 300 hours of various courses offered. As mentioned previously, the DACNB isn’t recognized in Canada as a specialty, but there are more than 30 practitioners in Canada with the designation. The programming is referred to as “brain based” therapy, although they are rolling out a new program akin to the “best of” the Carrick Institute called Receptor Based Essentials (RBE), focusing on how the brain responds to dys-afferentiation.

The pros: The traditional Carrick Institute is comprehensive and technically savvy. The consensus from people is it’s very didactic and academically challenging while ahead of the curve on how technology can influence neurological healing.

The cons: The practical application for the average doc is steep. Beyond the cost of education, travel, hotels, and time invested away from family for over 300 hours of education, the equipment costs can be staggering. You have to be fully in to make this work for you and dedicate your life to this trade.

Assessment: If you’re 100% in, and ready for the time and financial commitment, go for it. However, the addition of the RBE will likely mitigate this for the future and provide docs with a more reasonable starting point for this technique.

Proprioceptive-Deep Tendon Reflex (P-DTR)®
Created by a Mexican orthopedic surgeon, Dr. José Palomar, P-DTR is the practical confluence of neuroanatomy, orthopedics, and manual therapy. The focus is on identifying dysfunctional receptors, be it proprioceptors (golgi tendon organs), nociceptors (neospinothalamic track/paleospinothalamic track), and the autonomic system amongst others. Identifying these dysfunctional receptors and applying it to improve improper movement patterns, stability, coordination or simply pain can rectify the abnormal compensations created by the brain to cope with the problem. The program includes a foundation program of four, four-day modules, which provides practitioners with the methodology, and practical tools to apply it. The two module intermediate program is heavily focused on the application of the technique to various orthopedic and movement-based problems. The two module advanced program discusses strategies surrounding peripheral nerve entrapment, influencing cranial nerves, and metabolic systems.

The pros: Of the functional neurology techniques, this one is likely the best balance between training, practical application, and cost. Mastering even the basics of this technique can make you a “wizard,” enhancing changes to your technique that no one else can touch, and solving problems that many had given up on. You also do the majority of the work with your hands, so no extra costs are necessary. Neurophysiological modelling also helps the practitioner make sense of what they are seeing.

The cons: This technique, to the independent observer, looks strange. To stimulate various receptors, you are swiping, slapping, or poking your patient. If your patient is a simple chiropractic case, used to getting your great care in the office, and doesn’t require a deep dive for a complicated problem, this technique is likely to raise eyebrows to the point someone might walk away and call you crazy. However, with proper education, and taking the time to demonstrate how this works, and “dialling down the weird,” you can largely mitigate this effect. Most patients call it voodoo, but they do so in a positive way after seeing dramatic changes. As for the program itself, it could use better clarity on patient flow, and how to use which strategy to apply to which problem.

Assessment: In full disclosure, the author of this article has taken this program in its entirety, although there are no financial ties to the organization. The results have been astounding and they work fast. However, the ability to properly assess and treat a patient using this technique within 15 minutes or less is very challenging. Most practitioners operate in 30- to 60-minute blocks, which can make it difficult from a financial perspective. The author blends traditional chiropractic care, manual therapy and P-DTR concepts in specific applications to avoid loss of time and reduce redundancy. Each practitioner needs to figure out how to apply the right technique at the right time. Purely from a results perspective and practical application, this technique is one to look at.

Neurokinetic Therapy (NKT)
Neurokinetic therapy is the brainchild of David Weinstock, a massage therapist from California who developed an interesting concept. According to David Weinstock, the NKT protocol “allows the practitioner to have a conversation with the brain. The brain reveals to the practitioner what is not working and what is compensating for that. Then using the protocol, the practitioner releases the compensator and activates the underworking part. This reprograms the motor control center and reorganizes the movement pattern.”

There are three courses for NKT available, taught over two days. Level 1 opens the student to the concept of the assessment and treatment protocols. Level 2 focuses on correcting dysfunctional movement patterns with a major focus on fascial slings, and Level 3 introduces neurological concepts that attempt to wrap everything together.

The pros: This technique is by far the easiest functional neurology technique to learn and apply quickly. You find weak muscles associated with a painful problem, you find the “where” on the body that negates the weakness, and you treat that area using whatever tools you have, resulting in the original muscle being corrected, along with the dysfunctional movement pattern, and hopefully, the patient’s pain.

The cons: The explanation provided to the practitioners about how it works could be improved. As someone who has taken Level 1, I believe it is simplified to make it more palatable to the masses, including strength trainers, Pilates instructors etc., and not to overwhelm.

Assessment: This course is a definite must for anyone who wants to dip their toe into the world of functional neurology, without incurring a massive commitment of time and cost. The course opens your mind to unique ways in which the body can change and react to relatively simple treatment, but provide lasting results for cases that have resisted traditional therapy.

Controversy
The chiropractic profession is very used to controversy. The functional neurology branch is no different. A chiropractor in B.C. has been subject to three complaints to the regulatory board due to inappropriate advertising techniques and using terms like “brain balancing,” and stating that they practice “Board Certified Neurology.” As reported in a CBC article in July 2019, the College of Physicians and Surgeons feels this is misleading, and also the term ‘brain balancing’ describes a therapy not specifically taught anywhere. Not unlike what we see in complaints from individuals with dubious advertising, this case just shows there are bad apples everywhere, and isn’t an example for practitioners who use functional neurology appropriately in their practice.

Is it, or is it not evidence-based?
Regarding the efficacy of functional neurology (FN) in a 2018 paper by Meyer and Leboeuf-Yde, in Chiropractic and Manual Therapies, the authors conclude: “This journal contains no acceptable evidence on the effect or benefit of FN in relation to various conditions and purported indications for intervention.”

The paper admits that this is largely the result of poor methodology existing in a poor selection of existing papers. Considering this field is relatively new, in comparison to other techniques, it can be expected that the financial resources and skilled scientific oversight might be lacking.

So, in the strictest sense of the word, is functional neurology evidence-BASED, the answer is no. Evidence-INFORMED, this author would argue yes. However, not much in musculoskeletal medicine has much evidence beyond a grade of B, after a hundred years of practice and study. As chiropractors, we still argue over what we do, and how the chiropractic adjustment works, often failing on inter-examiner reliability studies, the centrepiece of assessment in chiropractic education around the world. The strength of many of these techniques is the consistency of the results and testing. When skilled in assessment methodology, many practitioners will obtain similar results, showing the same changes before and after treatment.

Take home strategies
It is easy to state that the results are there, but the proof is in the pudding. Let’s expand upon the experiment at the top of the article, using two tests. First, find a patient, with or without low back pain, who has a weak quadratus lumborum and a history of appendectomy. First, test the QL and, if weak, provide some quick soft tissue therapy to the scar, or acupuncture, or whatever tool you have at your disposal. It doesn’t need to be more than a few moments. Then re-test the weak quadratus lumborum and see if it feels strong. If it works, you can include this in your treatment and rehab plan.

Nociception is largely subconscious, although we focus on the conscious painful aspect. Seventy percent of nociceptive signals from structures around the body send messages to the brain to which the response may or may not be local to where the patient is feeling the problem. Dys-afferentiation from scars, surgical sites, etc., are just such examples.

In another example look at the cervical spine, find an individual with poor flexion to the C/Sp, or poor rotation to one side. Look at the patient, see imbalances, or poor movement in related areas including the sternum, shoulders, thoracic spine, or if treating a concussion, the skull. Touch this area and have the patient repeat the movement, until you find a location that improves the desired action. Treat that area you’ve touched however you see fit, using what tools you are most comfortable with. The improvement in neck motion should be apparent, and lasting. Ensure to reinforce with the appropriate exercise.

While these techniques remain somewhat controversial to many traditionalists, the true strength lies in being able to identify very subtle changes of movement with very pointed and specific assessment.

Considering how poorly sensitive traditional orthopedic testing is (Cox, deGraauw, and Klein; 2016), yet still heavily relied upon in education, any ability to find problems along the entire dysfunctional spectrum enables the practitioner to be the most successful.