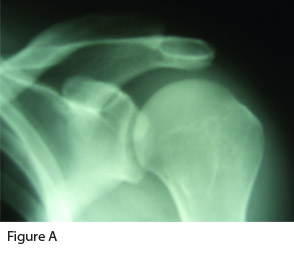 Thank you to Drs. Sonja Zabukovec and Diane Meyer of Oakville for this case.

This 46-year-old man presented with a prominent “bump” over the left acromioclavicular region following a traumatic fall on an outstretched hand. He experienced intermittent pain that increased in severity. Static posture evaluation demonstrated a significantly lower left shoulder. Abduction of the left arm from 90 to 180 degrees was painful, and pain increased as the arm reached full elevation. The pain was less severe during elevation with the arm facing anterior. Adduction was also painful. Upon palpation, the left trapezius, deltoid, and pectoralis major and minor were all hypertonic and tender. Additionally, arm flexion and adduction were accompanied by an audible “clunk” in the region of the acromioclavicular joint. The hospital films (Figures A and B) were read as normal by the medical radiologists.

The films, however, clearly demonstrate complete disruption, with the distal clavicle situated directly on top of the acromion process. The glenohumeral joint is unremarkable. 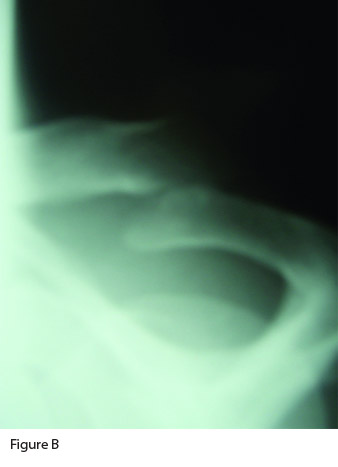 Discussion
The joints of the shoulder girdle are by far the most commonly dislocated, accounting for over 50 per cent of all joint dislocations.  Of the four joint complexes comprising the shoulder, the glenohumeral joint is involved in 85 per cent of cases (true shoulder dislocation), followed by the acromioclavicular joint at 12 per cent (referred to as shoulder separation), the sternoclavicular joint at two per cent, and the scapulo-thoracic articulation only one per cent.

When assessing acromioclavicular joint integrity, two views are often taken; the first as an anteroposterior with 10 degrees cephalad angulation to project the clavicle above the rib cage, and the second with the hand on the affected side holding a weight, to stress the A/C joint. Normally, the inferior and superior margins of the acromion and distal clavicle should be in smooth horizontal alignment. The joint space should demonstrate a maximum measurement of 4.1 mm in males. It can be helpful to compare one side to the other. Furthermore, the distance between the inferior margin of the clavicle and the closest surface of the coracoid process is normally 11-13 mm, and there should be no more than a 5 mm variation to the contralateral limb.•