This five-year old boy was sitting in the bleachers watching his mom
play tennis, when he fell off the third level onto the ground. 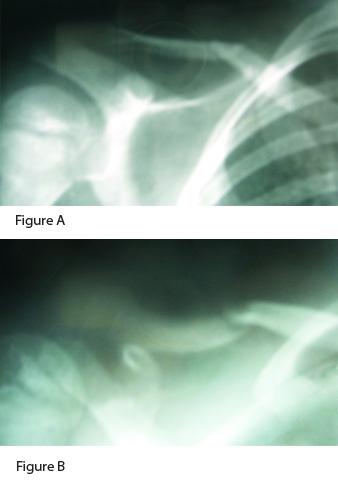 This five-year old boy was sitting in the bleachers watching his mom play tennis, when he fell off the third level onto the ground.  Hospital radiographs revealed a complete oblique fracture through the distal third of the clavicle, with inferior displacement of the distal fragment (Figures A & B).

The boy was placed in a clavicular (figure of eight) sling for six to seven weeks.

The fracture healed completely with a small residual cosmetic bump.

Some points to remember about clavicular fractures:
•    over 60 per cent occur in children under 10
•    most frequently fractured bone in children (usually at junction of middle and distal third)
•    sternoclavicular or acromioclavicular dislocation is very rare in children
•    must be clinically cognizant of the underlying subclavian vessels and brachial plexus
•    tends to be incomplete (greenstick) in infants and toddlers, complete in older children
•    when the fracture is complete, muscle forces maintain the deformity; the glenohumeral joint pulls the lateral fragment downward and inward (due to pectoralis muscle pull anteriorly and part of the trapezius posteriorly)
•    in contrast, the medial portion is pulled upward and backward by sternocleidomastoid
•    in general, children under six do not require formal reduction; massive callus formation usually remodels and disappears within six to nine months•