Enlarging the voice of chiropractic on the world health scene. 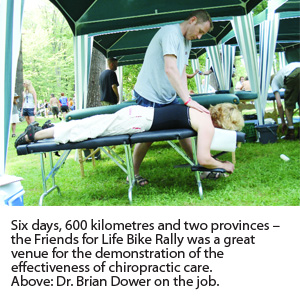 Providing chiropractic care for people living with HIV/AIDS is one way to improve these individuals’ quality of life and their immune systems.  Targeted fundraising ensures that research efforts continue to work towards a cure.  The Toronto People With Aids (PWA) Foundation’s 8th Annual Friends for Life Bike Rally allowed me to do both at the same time.

On July 23, 2006, 223 cyclists and a volunteer crew of 80 people left Toronto on a six-day, 600-km journey to Montreal.  This is PWA Toronto’s biggest annual fundraiser for which each rider has to come up with a minimum of $2,000 in pledges, this year totalling over $700,000.  Especially inspiring was the fact that more than 30 of the inspirational riders and crew were, in fact, living with HIV/AIDS.

During each of the past two years, I have volunteered a week of my time to be a part of the multidisciplinary bike rally wellness team, which also included paramedics, nurses, and massage therapists.  The wellness team, which travelled in support vehicles alongside the riders, provided basic first aid, chiropractic and massage treatments, as well as transportation to hospital in case of an emergency.

According to Scott Cheslock, special events coordinator with the Toronto PWA Foundation, “The wellness team is vital to the bike rally.  Not only do its members ensure the safety and physical well-being for all bike rally participants, but the wellness team also helps with relaxation, muscle pain, aches, injuries, and prevention as well as boosting immune function.”

At the 2006 event, a total of 1,120 chiropractic adjustments and massage treatments were provided. On loan from the Canadian Memorial Chiropractic College, a portable adjusting table was set up in farmers’ fields, roadside parking lots, and various campgrounds during the breaks and at the end of the cycling day.  Addressing a multitude of complaints, this was an amazing way to provide timely and clinically relevant adjustments to riders in need of care.

What did I adjust?  Well, after taking a brief history, performing an exam, and obtaining consent, just about everything.  Many of the riders were not trained athletes prior to beginning this strenuous ride, which resulted in various issues related to the forward-flexed cycling posture they had to sustain for hours on end each day.  Patello-femoral syndrome and inflamed iliotibial bands were also commonly found.  Cyclists were asked to demonstrate their cycling posture in situ; following the suggestion to slightly correct their knee angulation always resulted in relief.  We were also able to assess a number of riders who had been involved in accidents en route, providing primary care and determining who needed to be sent to the nearest hospital.

One rider, who presented two days after he had crashed over his handlebars and landed on his (helmeted) head, was experiencing dizziness and nausea on cervical extension.  I referred him to the local emergency room for X-rays.  Astonishingly, the attending doctor only palpated and told the cyclist that films were not required and he should go get a chiropractic adjustment.

There are many volunteer opportunities for chiropractors across the country. The Friends for Life Bike Rally is just one such venue. On an individual and local level, chiropractors can make a difference by heightening awareness about the astounding effects of an adjustment.  At the same time, they are enlarging the voice of chiropractic on the global health scene.•