Ultimate Frisbee The players, their injuries and the role of the chiropractor

All chiropractors see patients that are active in sports or recreational activity of some kind.  If you ever encounter a patient who has sustained an injury while playing the sport “Ultimate Frisbee” the following article will give you some insight into how their injury may have occurred. 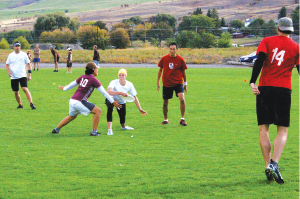 Ultimate frisbee – known simply as “ultimate”  is an exciting sport that combines the elements of football, soccer and basketball into one. It is a growing sport, with leagues in every major city in Canada. The Calgary Ultimate League, alone, has over 100 teams registered in their summer league.

“Ultimate” is played between two teams of seven players on a large rectangular field that has two “endzones” like in American football. These are the goal-scoring areas. A goal is scored when a team completes a pass to a teammate in the endzone they are attacking.

Players cannot run with the frisbee – referred to as the “disc” in “ultimate.” When you catch the disc you must come to a stop within a few steps and try to throw it to another player. Once you catch the disc, a person on the opposing team will begin counting to ten – you must pass the disc before they reach ten, or there is loss of possession or “turnover” of the disc. By passing from player to player, the offence attempts to work the disc up the field towards the endzone they are attacking. If the disc hits the ground, or is intercepted or knocked down by the other team, then the opposing team takes possession.

The defending team attempts to stop the team with the disc from making progress up-field by marking them  as in soccer or basketball. The theory is that the offence won’t want to pass to a player who is being marked closely, as this is likely to result in an interception. So it boils down to the offensive players trying to break free of their markers to receive a pass, while the defence makes every effort to stay with them in the hope of forcing a turnover.

A game of “ultimate” is typically played until one team scores 15 points  – some leagues and tournaments go to 13 – but also wins by at least two points. Each endzone catch is worth one point. What makes “ultimate” so unique is that there are no referees – everyone is expected to know the rules and call their own fouls. If there is a dispute that cannot be settled between the two players involved in the play in question, the play starts again from where the disc was thrown before the questionable play occurred.

Common injuries and Chiropractic in “Ultimate”

The most common injuries that occur while playing “ultimate” are ankle and knee sprains. You can count on seeing at least one person wearing a knee or ankle brace at any given game. The vast majority of players wear football or soccer-style cleats with rubber spikes and play on grass fields. The key to “getting open” when you are on offence is to make sharp-angled cuts to get space between you and your defender. Those sharp, sudden moves are one instance where these injuries might occur. As well, when jumping to catch a disc in a crowd of players – referred to as a “hospital pass,” as it is in many sports – landing awkwardly can cause those sprains and strains.

Familiarity with some soft tissue techniques such as Active Release Techniques (ART) or Graston Technique are a great treatment tool in dealing with scar tissue management in knee and ankle injuries.

One of my favourite aspects of “ultimate” is the many different ways that you can throw the disc. There is the conventional backhand throw, but also the forehand (referred to as the “flick”), overhand (“hammer” throw), push pass and sidearm (“scoober”). These throws can be made to curve in or out as well. Between all the throws in warming up for a game, and the game itself, overuse syndrome of the muscles in the wrist, forearm and shoulder girdle can result. This is seen in many tournament players as, in “ultimate” tournaments, teams typically play six or more games in two days. Someone who depends on the forehand flick throw will have hypertonicity of their wrist flexors, where subscapularis and even the oblique abdominal muscles can be involved as well. Frequent backhand throwers can stress the wrist and forearm extensors and the external rotators of the shoulder such as the infraspinatus and teres minor muscles.

Again, knowledge of soft tissue techniques, combined with a home and pre-game stretch routine, will enable a practitioner to address the muscle overuse issues in the wrist, forearm and shoulder. Chiropractic manipulation can be used to look for fixations not only in the joints of the upper extremity, but also the spine, especially in the thoracic area. As much as there is an emphasis in snapping your wrist in the “follow through” to make the disc spin – which will make it fly nice and flat – using trunk rotation while following through on the forehand or backhand throw is essential to put the proper distance on your pass.

The “practice-building pearl” to be taken from this article is that although ultimate frisbee is not well known, most of the people who have played for more than three years are very passionate about their sport. If you show that you have some knowledge of it, they will be impressed. It can be annoying to hear “ultimate frisbee – what’s that?” and then have to explain the sport to a caregiver. Having this prior knowledge will, no doubt, help build a good rapport with your patient.

Dr. Trevor Mintz practises at his clinic, Douglas Square Chiropractic, in southeast Calgary.  Heis a certified ART provider and uses Graston Technique as well. He has been playing “ultimate” for six years.