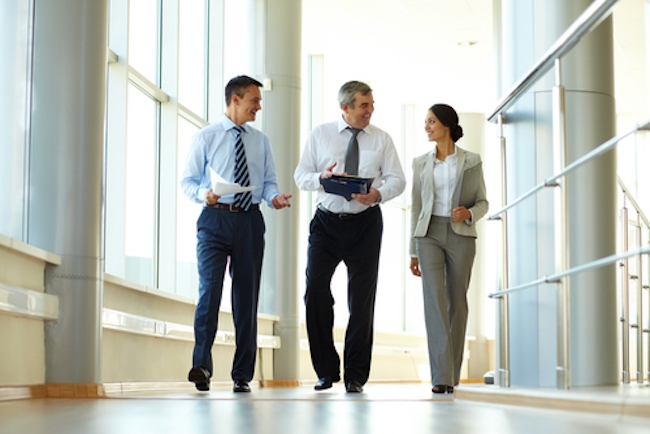 Changing just one seated meeting per week at work into a walking meeting increased the work-related physical activity levels of white-collar workers by 10 minutes, according to a new study published by public health researchers with the University of Miami Miller School of Medicine.

The study, published June 24, 2016 in the Centers for Disease Control and Prevention’s journal Preventing Chronic Disease, suggests a possible new health promotion approach to improving the health of millions of white-collar workers who spend most of their workdays sitting in chairs.

Titled, “Opportunities for Increased Physical Activity in the Workplace: the Walking Meeting,” the study also supports the American Heart Association’s recommendations of 150 minutes per week of moderate-intensity physical activity for adults, or about 30 minutes each weekday.

“There are limited opportunities for physical activity at work. This walking meeting pilot study provides early evidence that white-collar workers find it feasible and acceptable to convert a traditional seated meeting into a walking meeting,” said the study’s principal investigator, Alberto Caban-Martinez, assistant professor of public health sciences at the University of Miami Miller School of Medicine.

“Physical activity interventions such as the walking meeting protocol that encourage walking and raise levels of physical activity in the workplace are needed to counter the negative health effects of sedentary behavior,” he added.

Participants in the study, who were white-collar workers recruited from the University of Miami, wore accelerometers to measure physical activity levels during the workday over a three-week period. They also followed a “walking meeting protocol” that included guidance for leading meetings and taking notes while walking.

The average combined moderate/vigorous physical activity reported by participants increased from 107 minutes in the first week to 114 minutes in the second week and to 117 minutes in week three of the study.

“Walking is known to have tremendous health benefits,” said lead author Hannah Kling, the study’s project director and a graduate of UM’s Department of Public Health Sciences. “Having sedentary, white-collar workers consider walking meetings feasible suggests that this intervention has the potential to positively influence the health of many individuals.”

Previous studies have proven that engaging in moderate exercise, which includes brisk walking, for as little as 15 minutes per day can add up to three years of life expectancy.

Related
Seniors with arthritis need only 45 active minutes per week: study
Participaction report card gives Canadian adults an F for physical activity
How much do sedentary people really need to move? It’s less than you think
Poor sleep may keep arthritis patients from getting enough exercise