Why Chronic Inflammation Poses Such a Threat 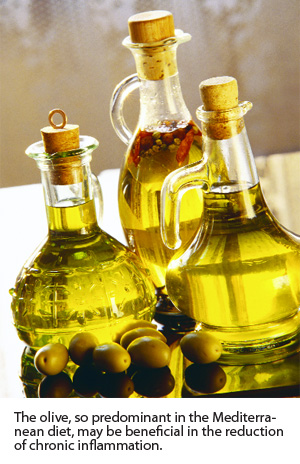 There has been a shift in thinking recently regarding the pathological role that chronic inflammation plays in cardiovascular disease (CVD), cancer, diabetes, autoimmune disorders, and Alzheimer’s disease.  Although these different conditions affect various parts of the body, they share the commonality of chronic inflammation, which is now recognized as a very strong predictor of disease and mortality.

When an individual is stressed by injury, viruses or bacteria, the immune system initiates a cascade of events designed to protect the body, destroy the invader and repair tissue.  However, when these events remain in a chronic, elevated state, they no longer serve a protective function but can cause damage to healthy tissue.

ASSESSING CHRONIC INFLAMMATION
C-Reactive Protein (CRP) is produced in the liver in response to elevated levels of tissue/blood inflammatory mediators such as IL-1_, TNF-_, and IL-6.  Highly sensitive C-reactive protein (hs-CRP) is considered a very stable marker of chronic inflammation.  Its levels are measured through an inexpensive blood test.  CRP becomes elevated in response to IL-6, which is released by immune cells.  IL-6 is very transient, difficult to measure, and expensive to test for.  Thus, hs-CRP represents a more practical and accurate marker, but it should not be measured until at least 72 hours after an injury.  (Values: >10mg/L = high level of chronic inflammation; > 3mg/L = greater increase in risk for stroke/CVD [approx. increase of 300 per cent for CVD]; >1-3mg/L = elevated risk for disease; < 1mg/L = low level of chronic inflammation; < 0-5mg/L = optimal level.)
Though there are other inflammatory mediators for specific diseases, hs-CRP is the most practical general marker for this discussion.

WHAT CAUSES CHRONIC INFLAMMATION?
Obesity
Adipose cells are now regarded almost as an endocrine organ system, having the ability to release damaging inflammatory mediators such as cytokines.  Keep in mind that it is body fatness, specifically abdominal fatness, that puts one at higher risk for an elevation in chronic inflammation.  Body Mass Index (BMI) acts as a good predictor for chronic inflammation and health.  A BMI greater than 25 is considered overweight.

Obesity is a major concern for our society.  By 2010, it is predicted that over 56 per cent of the population will be considered obese.  Currently, over 11 per cent of adolescents are obese.

Food and dietary patterns
Diets high in refined carbohydrates, sugars – especially high-fructose corn syrup, and foods that are high on the glycemic index – are all linked to an increase in inflammation, obesity and CVD.  Trans-fatty acids have also been shown to spur chronic inflammation.  Hence, it is beneficial to eliminate the consumption of deep-fried foods, processed/preserved foods, and margarine.  Foods that are high in arachidonic acid, such as red meats, eggs and high-fat dairy products, should also be limited in order to avoid the formation of inflammatory prostaglandins.

Following a Mediterranean-style diet has been clearly shown to have anti-inflammatory effects and an up to 40 per cent reduction of CRP.  A study published in the Journal of the American Medical Association (2004) found that the Mediterranean diet reduced all markers of inflammation.  Though there are several versions of the Mediterranean diet, there are seven consistent keys: red wine (one to two glasses per day); fruits and veggies (1 1/2 kg/day)/ olives and olive oil products; fermented low-fat dairy; deep-sea fish; whole grains; legumes; limited intake of red meat, sweets, and full-fat dairy products.

Sedentary lifestyle
Although the exact mechanism of protection is unknown, it has been shown that a physically active lifestyle cuts the risk of colon cancer by 35 per cent, and the odds for CVD by 25-35 per cent.  Studies released in 2006 say that exercising just twice a week will lower the chances of developing Alzheimer’s disease by 60 per cent.  Physical activity, if consistent, results in a drop in hs-CRP by as much as 40 per cent.  Sadly, however, just 20 per cent of Canadians surveyed report having undertaken any exercise in the previous 90 days.

Other factors such as smoking, hormone replacement therapy and sleep deprivation can also contribute to chronic inflammation.

A NATURAL APPROACH
How can the markers of chronic inflammation be lowered naturally?  Maintaining an ideal weight, eating a Mediterranean diet, staying active, not smoking or taking certain drugs such as those used in hormone replacement therapy are all strategies for lessening chronic inflammation.  Some specific supplements, such as omega-3 fish oil, should be incorporated.  Supplementing with an EPA:DHA fish oil totalling 1g/day can reduce hs-CRP by 20 to 40 per cent, whereas 2-3g/day have been shown to improve overall symptoms for many arthritis suffers.  Fish oils have been known to affect anti-inflammatory prostaglandins.  There are also benefits in combining a good quality source of gamma-linolenic acid (GLA) from borage oil with an omega-3 fish oil.

Although there has been controversy surrounding Vitamin E supplementation, it is important to note the value of a mixed natural (not synthetic) source including all eight isomers.  A mixed form of Vitamin E at 800 IU/day can reduce hs-CRP by 30 per cent.

The effectiveness of good bacteria in fighting infection and disease is being studied.  It has been shown that they can cause an inflammatory reduction, particularly in the GI tract with conditions such as irritable bowel syndrome.  Probiotics can decrease inflammatory cytokines such as IL-6 and TNF-_  by up to 40 per cent.
There are many other natural substances, particularly boswellia, turmeric and enzymes, that may help address chronic and acute inflammation.  These are all important, considering the alternative of using medications that, with extensive use, may cause cardiovascular disease, gastrointestinal bleeds, and liver toxicity, not to mention an accelerated deterioration of the original condition.•