Last year saw the start of the long-awaited professional… 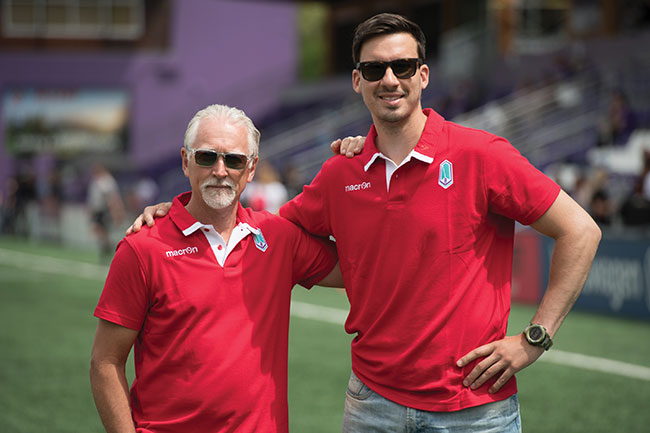 Drs. Murray and Hadbavny on-field before a match

Last year saw the start of the long-awaited professional soccer league in Canada.

With teams from coast to coast, the stage was set for an exciting inaugural season. In Victoria, the Pacific FC sought out the services of myself, and Dr. Mike Hadbavny as Chiropractic consultants. We were brought on to help organize the medical team under the leadership of Randy Celebrini, a physiotherapist out of Vancouver.

Together we’ve formed a working relationship and developed the protocols and templates to ensure the players received the best care possible. So, how did I get linked up with the pro club in Victoria? Well, there’s an old saying called “pay it forward.”

About 20 years ago I started to treat a very talented 17-year-old soccer player named Josh Simpson. He played for the under 18 team and loved chiropractic care. Coming from a large family, he couldn’t always afford treatment so I would give him a break whenever he came in to the office. Josh went on to play pro with Milwall in England’s first division and then Kaiserslautern in Germany. He finished with FC Bern after a career-ending injury a few years back. I also saw him on several occasions when he played in Europe and I made it a point to touch base whenever possible.

Flash forward 20 years and Josh became one of the owners of the new Pacific FC soccer team in Victoria. Needless to say he was instrumental in making sure I was involved with the team. At the very start of the season, our athletic therapist quit and was replaced by therapist Jamie Neil who was fairly new out of school, so she welcomed our addition without any pre-conceived biases. I also was very keen to involve the RCCSS(C) resident in my clinic, Dr. Mike Hadbavny. The team also enlisted Dr. Cara Ewart as the CMO who had worked with me at the 2004 Olympics and with the rowers on a regular basis. Therefore she was very familiar with chiropractic care and what we bring to the table. Recently, Dr. Christina Leonardelli is also now on-board with the brand new Ottawa team, Atletico Ottawa.

I asked Dr. Hadbavny: What was it like as a sports resident to be involved at the pro-level almost right out of the gate?

On paper it could seem like a daunting task working with professional athletes. Up until that point I had experience working with and treating a majority of amateur athletes from various sports and backgrounds. I was fortunate in my situation to have a phenomenal support structure around me through my resident supervisors, Dr. Mike Murray, and Dr. Scott Howitt. The ownership’s expectations for the players and staff are of the highest calibre. The club demands success and I am humbled to be involved with the club this early in its existence. The medical staff put in place with PFC has allowed us all to grow as practitioners and gain insight from our own individual experiences managing athletes. This combined has allowed me to hone my skills as a practitioner, and help shape my residency to something of tremendous professional value.

From Jamie Niel, I asked for a comment on the diversity of the medical team:

“The success of our medical team came from our symbiotic relationship as a group. As a medical team, we all have specialties in our chosen field and are open as a group to learn and collaborate together. Our collaborative style as a whole made our process streamline but also diverse which optimized each player’s treatment.”

Focus (of course) is on injury prevention and working closely with the strength and conditioning coach to ensure athletes are stable from the ground up. Also Dr. Hadbavny has a good background in rehabilitation so the communication with the strength coach was seemless. I would also say that we are proud that we have had virtually no sprain/strain type of injuries that are common in soccer such as hamstrings and ankles during the first season. Most of the season was spent addressing chronic conditions that the players showed up with in training. Working in professional sports has a unique set of hierarchies and rules that we all need to be wary of.

While COVID-19 first postponed the games, the teams eventually resumed with an abbreviated season. The Pacific FC finished 4th this year after round robin play in Charlottetown, P.E.I.

Dr. Murray has been with Rowing Canada for 29 years and has attended 6 Olympic Games. He teaches seminars internationally and has a private practice in Victoria, BC. where he runs a multi-disciplinary clinic.