Do you have what it takes to be a global practitioner? 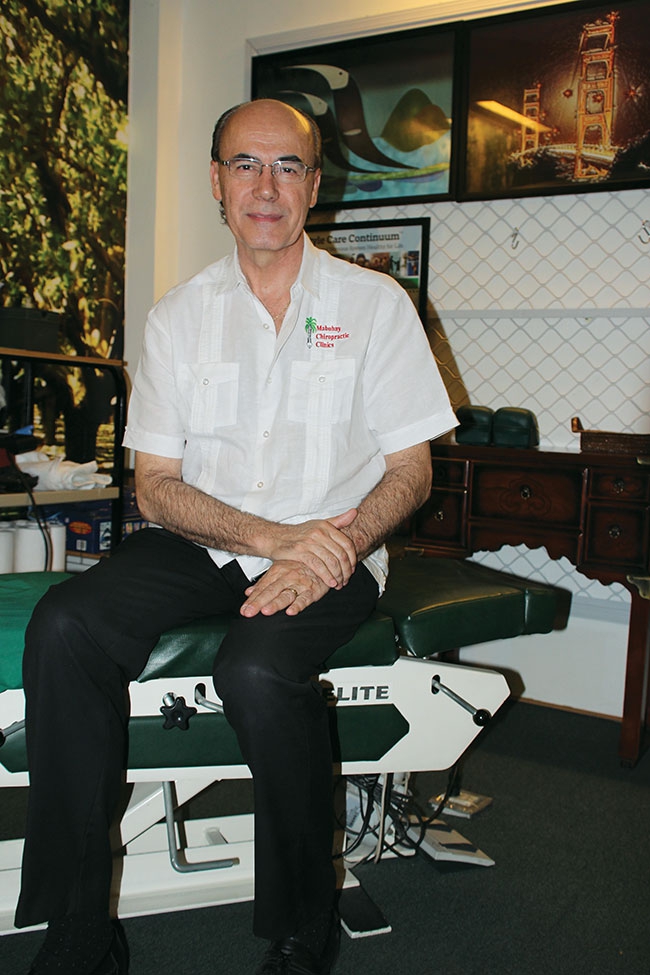 Canadian DC Michel Tetrault does his share in promoting chiropractic to the world by helping others transition to foreign practice. Photo credit: Mari-Len De Guzman

Setting up a practice in a foreign country thousands of miles away from home may seem overwhelming, even unappealing, to many chiropractors, but the few who have made the move are finding unparalleled professional and personal fulfillment.

One such doctor is Canadian Michel Tetrault, who has been practicing in the Philippines for the last eight years. He is the owner of Mabuhay Chiropractic Clinics, a cluster of chiropractic offices located in the country’s National Capital Region. He is also the executive director at Well Point Medical and Diagnostic Clinic, a fully accredited ambulatory medical and diagnostic clinic in Cavite, a province just outside of the Philippine capital city of Manila.

Tetrault not only manages his clinics in the Philippines, he is also actively helping other chiropractors become successful practitioners outside of their home country. He has a particular interest in helping doctors who aspire to set up clinics in Asian countries that have far less access to chiropractic care than their western counterparts.

About 80 per cent of the estimated 5,000 chiropractors in the Asia-Pacific are practicing in Australia and New Zealand, the only two nations in the region where chiropractic is a protected profession backed by legislation.

Chiropractic schools are few and far between in this part of the world as well. There are four universities in Australia that offer chiropractic education, while New Zealand has one.

Japan and South Korea each have one chiropractic school. However, the profession is neither recognized nor regulated in these two countries. In fact, chiropractors in South Korea are facing opposition from the medical doctors and are often prosecuted for practicing chiropractic.

Tetrault says the region could use more chiropractic learning institutions.

“It is very slow growing out here. The number one thing that blocks (chiropractic growth) is the lack of schools. If there is no school and you want to grow the profession from within, it can’t grow very fast because you have no way to replace the ones that go.”

Global citizen
Although he took the Canadian chiropractic board exams, Tetrault always had a foreign practice, opening his first clinic in California in 1981.

His involvement with his alma mater, Life University, brought Tetrault to Manila for the first time in 1998, where the World Federation of Chiropractic (WFC) was holding a meeting. That’s when he met his wife, Apple Sumida, a Filipina. Three months later they were married.

The couple lived in Vancouver as Tetrault maintained his practice in California and commuted to and from Vancouver. The decision to move permanently to Manila came several years later.

“It was a family decision to move here and be closer to my wife’s family,” says Tetrault from his Forbes Park clinic in Makati, an upscale community on the southern part of Metro Manila. He has one daughter with Sumida, and five other children from a previous marriage.

In the eight years that Tetrault has lived in the Philippines, he has learned to speak Tagalog – the Philippines’ official language. He has become familiar with the culture, the laws and the people. He named his clinics Mabuhay – a standard greeting in the Philippines which means, “long live.” As a businessman, he learned to deal with the bureaucracy often associated with third-world countries.

These are all knowledge and assets that are vital if a chiropractor is to succeed in a foreign practice, Tetrault says.

It is also important to do the research and talk to the right people within the government or community where one would like to build a practice, to make sure the DC is starting off on the right track.

Prior to opening his clinic, Tetrault met with the Philippines’ minister of health. “I asked him directly if there was any problem with me moving here and setting up practice. He was very welcoming and he said, ‘Come, bring more friends.’”

The minister was also upfront about setting political expectations, telling the Canadian DC not to expect laws for chiropractic in the Philippines to be coming any time soon – as the legislation process typically moves slowly in this part of the world.

Diplomatic Corps
Tetrault always had an interest in foreign practice and was even promoting it as an option for other chiropractors. With the help of other like-minded doctors with many years of experience under their belt, he spearheaded the foundation of the Chiropractic Diplomatic Corps (CDC) in 1997.

“We looked at how to help people get better organized in order to be interested in practicing abroad,” Tetrault says.

All the coaching and advising the CDC provides are voluntary and there is no fee to register with CDC, according to Tetrault.

Right candidate
Becoming an expat offers diverse opportunities for a chiropractor but, Tetrault notes, it is not for the faint of heart. There are many things to learn and think through carefully – and many times over – before one can actually make the transnational move and succeed at it.

The first step for any chiropractor considering a move and looking for resources to help them with the transition is to register with CDC. The online registration form asks for the chiropractor’s basic information and contact details. It also asks prospective DCs what country they are interested in relocating to, the length of time they plan to stay, whether they have previously been to this particular country, and whether they have ever lived in a foreign country before. It also asks about the chiropractor’s motivation for practicing abroad – an important indicator of whether a DC will likely succeed in his intention to practice abroad.

Running away from something or someone back home is not the best motivation for moving one’s practice abroad, Tetrault remarks.

It also helps if one has a connection to the place where one plans to settle. For example, a Canadian of Indian heritage may find more success practicing in India, than someone who has no personal connection to the country. Tetrault’s marriage to a Filipina made the transition a little easier for him and his family.

“The biggest thing to know about moving abroad is it really takes a serious commitment. This is not a working vacation. People need chiropractors desperately all over the world. They need someone who is serious, who is going to be a part of their community, who is going to stay and make a difference,” Tetrault says.

Finance is also a big factor.

To practice abroad as an associate doctor, Tetrault estimates a chiropractor would need about $10,000. This would help cover initial expenses until the practice grows enough to be sustainable – which typically takes at least two years.

If the intent is to move permanently, one would need about $50,000 – to cover the start-up money to open a clinic, the necessary funds to buy a house and a reliable car, as well as other daily operating expenses of a newly opened clinic.

Grass is greener
Tetrault cautions, not everyone who ever dreamed of working and living abroad will be successful, and many will eventually move back to their homeland, for various reasons.

“Most people – 95 per cent of the average person – are not equipped to be an expatriate,” he says. “But the five per cent do thrive in a foreign market, they just enjoy the challenge, and whatever it takes, they just make it happen. I’m one of those people.”

The biggest reason chiropractors want to move abroad is the belief that the grass is greener on the other side. Some are not happy with their practice and are facing intense competition.

“There are more chiropractors and less chiropractic patients, proportionately. There is one pie that is being made into smaller and smaller pieces – this is particularly true in Canada,” Tetrault says.

“One less chiropractor in Canada isn’t going to make much of a difference; but one more chiropractor here (in Asia) will make a huge difference,” Tetrault says.

Practicing in a community or country where there isn’t much competition but there’s huge potential to make a difference in the health of the population would seem like an attractive proposition for many DCs – and this is what it is driving many doctors to practice abroad. But such motivation and noble intentions might not be enough to succeed, Tetrault notes. One must have the right attitude and mindset to adapt effectively to a different culture, environment and people.

The vision is simple, according to Tetrault: 300,000 chiropractors in the world.

The objective, however, is not accomplished just by deploying chiropractors all over the world. Doctors must establish meaningful relationships with stakeholders – government, educational institutions – in their country or community of choice. Such relationships can lead to the establishment of chiropractic colleges and introduction of legislation in nations were chiropractic never existed before.

This is what is happening, albeit slowly, in the Philippines. After 25 years since its first chiropractor opened his doors this small country has made some progress. It now has a system of registration for chiropractors with the Ministry of Health, and a proposed law regulating chiropractic is now awaiting deliberation before the Philippine legislature.

Related
From the Editor: April 2014
XYZs of foreign practice
DC takes on TV as “Doctor Pain”
Doctor or Landlord?