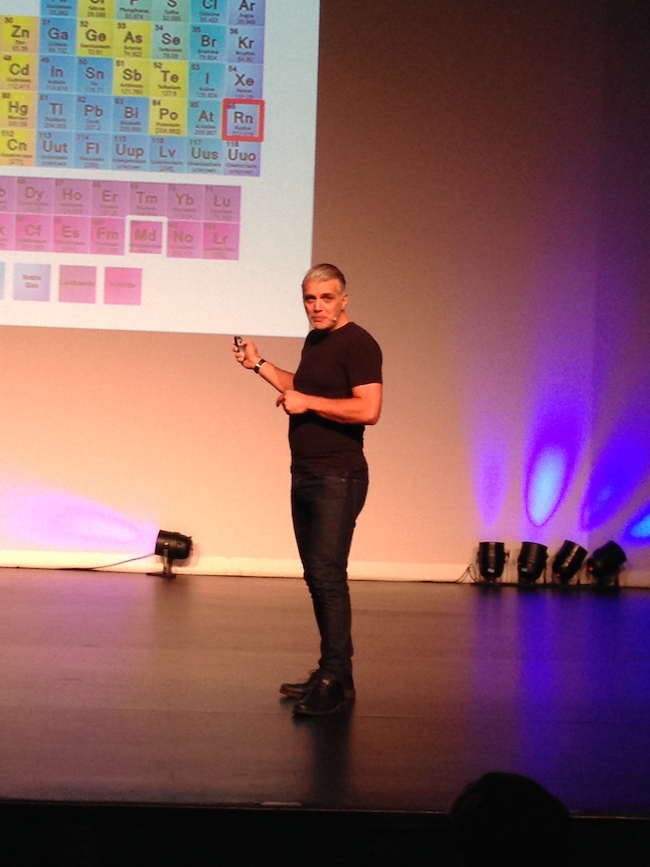 Dr. Greg Kawchuk having a little fun with the periodic table in his keynote at the CCA National Convention

NIAGARA FALLS, Ont. – Advancing the chiropractic profession through excellence in patient care has been the underlying theme at the recent chiropractic national convention hosted by the Canadian Chiropractic Association (CCA).

The vision is to make chiropractors an “integral part of any health-care team by 2023,” declared Dr. Robert David, chair of the CCA board of directors, in his opening remarks during the convention. He added the education sessions and discussions at the conference were designed toward serving this objective.

In his keynote, Dr. Greg Kawchuk, Canada research chair in spinal function at the University of Alberta, discussed the future of chiropractic and offered some tools to help chiropractors stay engaged in health-care developments.

He urged chiropractors to constantly read about the latest evidence in chiropractic care and talk to colleagues – not only within the profession but especially with other health-care professionals.

He encouraged the attendees to look at the clinical practice guidelines that are available as well. “Ninety-one per cent of everyone wants the best scientific evidence of a treatment.”

Kawchuk acknowledges the divisions that exist among the profession – symptom care versus wellness care – and pointed out “science is going to bring it together.”

“Pain is the great unifier,” Kawchuks says. By removing the patient’s pain the symptoms are eliminated and will result in overall patient wellness, he pointed out.

By shifting the paradigm toward patient-focused care, chiropractors can find a common ground despite the disagreements, said author and speaker Dr. Fabricio Mancini, who also addressed attendees at the conference in a keynote presentation.

“If we focus on patients, we don’t seem to disagree much,” he says. “The impact we have in patients’ lives is so much deeper than just helping them with their pain.”

Mancini, along with Dr. Jean Moss, former CMCC president, and Dr. Greg Stewart, WFC president, participated in a panel that discussed an “inclusive” paradigm for the chiropractic profession.

Stewart and Moss echoed Mancini’s point about patient-focused care as a way to advance the chiropractor’s role in health care. “People want to see that you’re putting their interest first,” Stewart said.

The panelists also recognized that engagement among chiropractors is an issue that is not just happening in Canada but worldwide. Mancini urged those who attended the convention and have been “re-engaged” to share their experience with other chiropractors in their community who may have missed the event.

The 2015 CCA National Convention and Tradeshow was held in Niagara Falls Sept. 18 to 20.