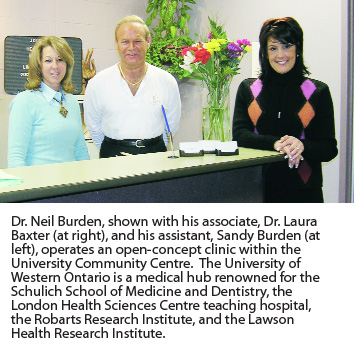 When he says he goes out of his way to give his patients the best care possible, you believe it.  Dr. Neil Burden is a man who feels that he is at the right place at the right time.  University students represent nearly 80 per cent of the people who pass through his clinic every day, 50 hours a week, 12 months of the year.  Most of them are away from their family and home, which might be an entire ocean away. “They’re in a safe place here,” says Burden, who, for more than a quarter of a century, has been offering subluxation-based chiropractic care as a key component of a healthy lifestyle.  Together, he and his associate and his assistant nurture students through four or six years or more of schooling, sometimes even meeting and treating their parents in the process.  More than a dozen patients have been inspired to go on to become chiropractors themselves.

Beleaguered by backpacks, weighed down with books, slumped over computers, suffering from the stress of fierce academic competition and possibly from the effects of sports or motor vehicle injuries, maybe a little depressed, today’s post-secondary student understands Burden’s analogy: Why function like a Pentium II, when you could function like a Pentium 1V?  Observing that young people are demonstrating refreshingly new attitudes about the body, health and healing, Burden emphasizes to them the importance of the chiropractic adjustment along with good nutrition, regular exercise, and a positive mental attitude.

As a pilot project beginning in 2000, Burden first began providing chiropractic care within the Student, Staff and Faculty Health Services facility located in the University Commmunity Centre (UCC) at the University of Western Ontario (UWO).  There is a tremendous traffic flow through the centre, which is also a focal point for food, recreation, entertainment and retail services.  In 2001, he subsequently opened what is simply called The Chiropractic Clinic.  With the intention of removing barriers, and any residual trepidation or fear, adjustments are performed in the open-concept adjusting area under the observation of passers-by.  In this informal atmosphere, chiropractic education filters throughout the office, demonstrating, as Burden says, that “chiropractic is alive and well” at Western.

The university, with its population of 25,000 full- and part-time students and 5,000 staff and faculty members, is in itself an international community that is associated with the adjacent University Hospital/London Health Sciences Centre, whose employees may also find their way to Burden’s adjusting tables.  The famed Fowler Kennedy Sport Medicine Clinic, and events such as last year’s World Transplant Games have been other sources of referral.  Burden and his associate, Dr. Laura Baxter, actively deliver the chiropractic message, speaking to various faculties and at student residences, and appearing in articles and columns in university publications.
Going back and forth between UWO and his family practice on Oxford St., Burden exudes passion and purpose in his work.  “This is the vehicle that I use to help people,” he says.  “It’s called chiropractic.”•