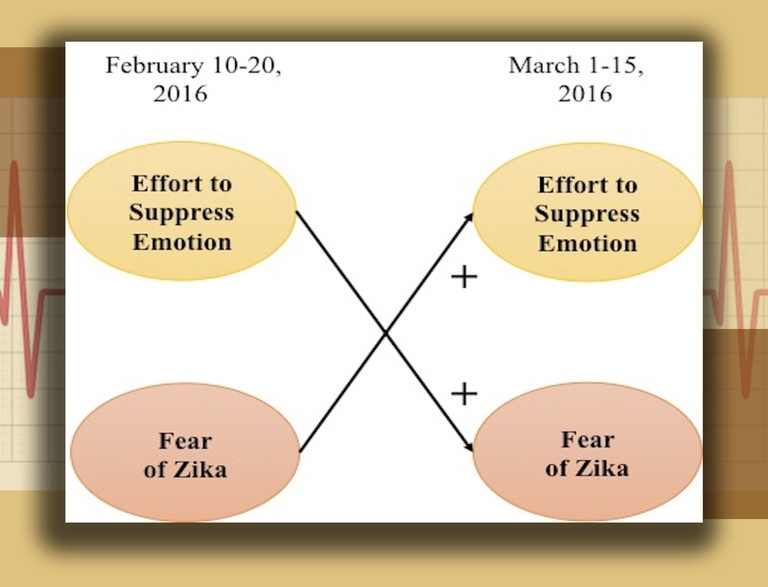 Pregnant women became more fearful as they tried to suppress their emotions about the Zika epidemic. This, in turn, led to more suppression leading to a spiral of fear. Courtesy of James Dillard

UNIVERSITY PARK, PA—Trying to suppress worries during a health scare, like the recent Zika outbreak, may lead to an ever-intensifying cycle of emotional suppression and fear, according to a team of researchers.

In a study of pregnant women in areas of the United States vulnerable to the Zika virus, the researchers found that women who tried to suppress their fears reported higher levels of fear later, which, in turn, prompted more emotional suppression. Pregnant women were particularly concerned about Zika because media sources at the time reported that the virus, spread mainly by mosquitoes, could cause birth defects, including brain damage.

“It turns out that not only is suppression ineffective at handling fear, but it’s counter-productive,” said James Dillard, distinguished professor of communication arts and sciences. “It creates a cycle of fear — and it’s a vicious cycle.”

According to the researchers, suppression — actively trying to tamp down fear — is one strategy people use to manage their fears. Among other strategies, people may also try to avoid bad news, reappraise the situation, or contest the information with counter-arguments. While the researchers found that none of these strategies helped to manage fear during the Zika scare, suppression was the only strategy that they studied that actually increased the fear, said Dillard.

Ironically, the researchers — who report their findings in the current issue of PLOS ONE — suggested that, based on risk, the health problems associated with stress and anxiety caused by a health scare — in this case, Zika — may be as consequential as the actual disease. For example, while the pregnant women may have feared that Zika threatened the health of their unborn babies, previous studies of pregnant women during the 9/11 attacks showed that fear and stress reduced infant birth weights.

“When people become frightened there are some good things that can happen — they search out information, they get politically engaged, they might engage in self-protective behavior — but when people get really scared, it’s harmful for them,” said Dillard. “Stress hormones pour out and staying in that hyper-vigilant state — fear — is also resource intensive.”

Dillard said that because people at risk will search on the web for information, public health officials should try to stay one step ahead of the outbreak and provide quality information about growing health crises.

He added that health officials may also want to inform the public about the stress and fear that may accompany disease outbreaks and other health concerns to help them manage their emotional response to the news.

“The other thing we can do that hasn’t been done is we can warn people that they may become frightened, to inoculate them against that emotional response,” said Dillard, who also worked with Chun Yang and Ruobing Li, both former doctoral students in mass communications, Penn State. Yang and Li are currently assistant professors of communication at Louisiana State University.

While the study focused on fear of an epidemic, Dillard said the findings may also apply to other concerns, such as environmental and natural disasters.

The researchers recruited 1,002 women between the ages of 18 and 35 who lived in Arizona, New Mexico, Texas, Louisiana, Mississippi, Alabama and Florida, all states that were thought to be in range of mosquitoes that could carry the disease, with 912 participants providing usable data. To calculate emotional responses and levels of fear over time, the researchers collected data in two waves. The first collection occurred between Feb. 10 and Feb. 20, 2016, nine days after the World Health Organization declared Zika an international health emergency. The second collection occurred between March 1 and March 15, 2016.

The researchers asked the participants to fill out a survey to assess their fear and their use of emotional regulation strategies, which included avoidance, reappraisal, contesting and suppression.

Future research could be aimed at identifying effective emotion regulation strategies to help people better cope with health scares and other concerns, according to the researchers.