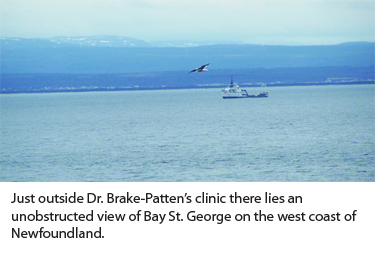 Thumbing through a recent issue of Canadian Chiropractor magazine, the article entitled “Boom Town Practice” by Dr. Tim LaForest caught my eye. It talks about the oil boom in Fort McMurray, Alberta, and, even though I live in a different part of Canada, this story is very near and dear to my heart.

Since the 1980s, thousands of people from Newfoundland and Labrador have left everything behind to seek their fortune in the tar sands. The out-migration to Alberta has been so significant that a CBC news report in 2006 referred to Fort McMurray as the third-largest city in Newfoundland and Labrador. This is ironic since, as Dr. LaForest indicates, Fort McMurray is positioned to become the third-largest city in Alberta.

DON’T BLINK OR YOU’LL MISS IT
I grew up in a very rural place on the west coast of Newfoundland called St. Fintan’s, one of the smallest communities in the Bay St. George region. “Don’t blink when you drive through St. Fintan’s because you may miss it,” was the standing joke.

After graduating from the Canadian Memorial Chiropractic College in 1994, I moved back to practise in Stephenville, a beautiful little town with a lot of character. Known as the hub of Bay St. George, Stephenville has approximately 8,000 people and a drawing population of nearly 25,000. Nestled between the North Atlantic Ocean and the Appalachian Mountains, Stephenville has had its share of ups and downs but it has always managed to survive. Formerly the site of a U.S. Air Force base selected for its excellent flying conditions, the town was hit hard in 1966 when the base closed. That was really the beginning of the mass exodus from the district to Alberta.

When Newfoundland and Labrador Linerboard opened in Stephenville in 1972, new manufacturing jobs did bring back some of those who had left, but not all. This industry was short-lived,  however, and shut down for good five years later. Once again, workers fled to the mainland. In 1981, everything seemed to be on the upswing when Abitibi Consolidated opened a newsprint mill in Stephenville. 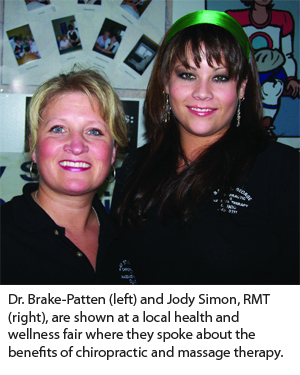 UNCERTAINTY
Many chiropractors apparently came and went over the years but because of the uncertainty most were very hesitant to settle. There was no full-time chiropractor at the time I arrived, though a DC from the neighbouring city of Corner Brook serviced the area one day a week.

During my first summer in practice, I was a little concerned that I would slow down when so many of my patients went away to work seasonally. But to my great surprise, the summers were busier then ever with a steady stream of chiropractic patients coming home from Fort McMurray to visit their families. An unbelievable number would phone ahead to make sure their appointments were booked before their plane touched down. Alberta had served them well as they were all very secure financially, and fully aware of the benefits of chiropractic. Most of them had been receiving regular care from Drs. Tim and Cheryl LaForest. Although I did not know this professional couple personally, I was connected to them through our mutual patients.

In late October 2005, Stephenville was dealt another devastating blow when Abitibi Consolidated closed its doors, resulting in a loss of over 300 direct positions and 1,500 spinoff jobs. After building a large practice over 11 years, I had no intention of pulling out. The people of Stephenville needed me, and I planned on sticking around to help keep things together. Though Abitibi was the biggest force, there were still many other businesses, both private and governmental, that contributed to the town’s economy.

‘THE SIX AND TWO’
The latest westward movement began, but it was a little different this time. Folks in Stephenville had a lot invested in their families and homes, which they did not want to abandon. While some permanently relocated to Alberta, the majority started commuting. Out west, they either live in the work camps or in rental accommodation with their friends. The most popular arrangement is “the six and two” – six weeks in Alberta and two weeks at home.

The LaForests and I continue to provide continuity of care and support for the patients we share, from east to west in this big nation of ours.•