Behind the successful clinic network in Atlantic Canada 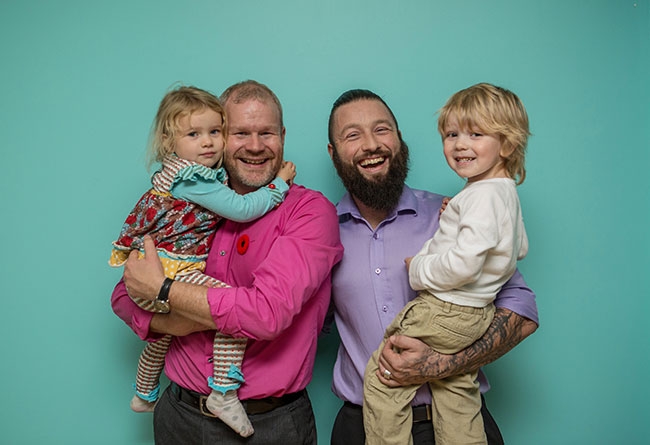 Drs. Erik Klein (left, with daughter Torunn) and Daniel Comeau (with son Griffin) are building a successful legacy for their team and their families.

Sylvia Hoyt believed she’d never ride her beloved Quarter Horses again – until she met chiropractor, Dr. Erik Klein, who was determined to get her back up in the saddle again and competing against the world’s top equestrians.

Riding Quarter Horses since age four, and competing and showing the speedy American breed since she was just 12, Hoyt was unaware that her riding was out of sync with her charge. Two years ago, as she turned 40, she noticed the equestrian movements atop her mount – once so fluid – were becoming severely restricted.

“There was no pain,” she says. Her trainers and coach were baffled why a competent rider could no longer do it. “They tried everything,” recalls Hoyt, speaking from her home in Hampton, New Brunswick. “Nothing worked. I believed my days as a competitive rider were done.”

Then her dad suggested she see Klein. She hoofed it over to his office, located nearby. “I thought just my posture needed adjustment, but it proved more complex,” she cringes at the memory. “I had no idea how bad a mess I was in.”

Getting recommended to Klein is common in this part of southern New Brunswick, though his renown ripples much farther. He’s known as the founder and CEO of The Town Chiropractor, a network of clinics that provide essential care to people in a number of smaller communities across the province.

“Our team of health-care professionals address the needs of those that need it most,” says Klein. “We also provide care and represent the interests of major sports teams, businesses and associations across New Brunswick.”

Around Town
Beyond being a much sought-after local chiropractor, Klein has garnered a province-wide profile as well. He recently completed a four-year term on the board of directors of the Horizon Health Network, one of the largest health-care organizations in Atlantic Canada, operating 12 hospitals and more than 100 medical facilities, and clinics providing medical services in New Brunswick, northern Nova Scotia and Prince Edward Island. He oversaw the organization’s $1.3 billion budget, covering 13,000 public sector health-care workers.

“I took the opportunity to expand my sphere of influence and that of my profession,” he says. “We advocated for the need for more resources on disease prevention, and to create a strategy that keeps people healthy along with access to the services they need. I’m proud of our accomplishments.”

Working tirelessly in promoting wellness for all New Brunswickers, Klein’s energy and purpose are also evident in the spectacular growth of The Town Chiropractor. Following his 2004 graduation from the Canadian Memorial Chiropractic College (he also holds a B.Sc. in Anatomy and Cell Biology from McGill University), Klein started The Town Chiropractor as a solo practice in his hometown of Hampton. He later branched out to other satellite offices in St. Stephen, St. George, Saint John, and a travelling office that goes to remote island Grand Manan on a monthly basis. Things got really boiling in 2012 when he crossed paths with new chiropractic grad, Daniel Comeau.

When they met, the connection was immediate. “Erik said we’d get along well; we complemented each other’s personalities, and I was a fresh young doctor with fire in my belly to get my practice into high gear,” Comeau recalls.

Klein saw an unprecedented determination and work ethic in his jovial, bearded colleague. “I knew that Dan had something that you couldn’t teach, and I knew that to grow the business from a handful of relatively small clinics to the empire I dreamed of, I needed someone as stubborn and as passionate as I was.”

Comeau relished the idea of working in a multidisciplinary clinic environment. “We agreed that we wanted all of our clinics to operate on that scale. It didn’t take much selling for me to buy in. We’ve worked ever since with one goal in mind: To become the largest multidisciplinary/results-driven health network in Atlantic Canada.”

Now the COO of The Town Chiropractor, Comeau sees that goal coming to fruition. The organization is seven clinics strong, comprising five chiropractor/associates, 10 massage therapists, a naturopath, a kinesiologist, and an athletic therapist. Plans are well on the way to expanding clinics across Atlantic Canada, then into southern Ontario, and eventually hurdling the U.S. border. They will be test-running two franchise clinics in 2018; adding between five and seven franchises in 2019; and ballooning to an expected 100 locations by 2025. “We’re swinging with the fences,” chuckles Comeau.

The key driver behind the accelerating growth of the Town Chiropractor business model is hiring grads with the right stuff. “I read everything about management and leadership and retooled how I approach new graduates and people new to our organization,” explains Klein. “It wasn’t about making a buck, but it was about knowing you were contributing to something special that would be making society a better place.”

To Comeau, a major success – in addition to winning two national awards for being inspirational public service advocates to the chiropractic profession – has been streamlining systems for practice development for new graduates. “Our goal is to help grads get to a five-year competency within six months,” he says. “We’ve developed clinical standards that give new doctors an opportunity to develop their skills and get the necessary results more rapidly.”

And when targeting locales for a new clinic, there are the must-haves. “For us determining new locations stems from the model we see in our clinic network,” Klein says. “The clinics we had in smaller town like Hampton, Sussex and St Stephen all grew really quickly. This is likely because word of mouth is highly effective in smaller communities.

“We also try to pair offices nearer to larger urban centres as it is highly difficult to find doctors and therapists that are willing to move exclusively to a smaller community. However, these small towns in rural areas are notoriously underserved, and accessing them from a business standpoint only makes sense. Moving forward, while we have locations that we’d like to establish, we will identify exceptional practitioners and use their hopes, goals and passion to evaluate where to go.”

Drs. Erik Klein (left, with daughter Torunn) and Daniel Comeau (with son Griffin) are building a successful legacy for their team and their families.

Team Town
The company’s associate at the Fredericton and Woodstock, New Brunswick, clinics, Dr. John Neal, hails from Brown’s Flat, New Brunswick and his post-grad plan from the CMCC (2016) was to return to the region to pursue his practice.

“I’m sports oriented, and specialize in doing movement-based assessments,” he says. “Town Chiropractor’s model allows me to get involved in local sports organizations, working with them to bring coaches and athletes into my clinics, it’s a dynamic team approach that resonates with me. I’ve managed to accelerate my education, ramp up my assessment and treatment skills, and by tapping into all of The Town Chiropractor’s resources and expertise, I’m making a significant difference in patient outcomes.”

Dr. Kayla Mayberry agrees. “I met Daniel two years before my graduation from CMCC,” says the new associate for the Saint John and St. Stephen clinics. “He explained what the company is about and I hopped on board.”

But first, she took an opportunity to travel to Tanzania with the Global Peace Network, applying her chiropractic skills to help men, women and children in the rural part of that country for three months. “Daniel and Erik encouraged me to volunteer,” she affirms.

Mayberry now enjoys her part as the travelling practitioner for a burgeoning patient load on Grand Manan island, a 90-minute ferry ride away on the Bay of Fundy. “I was booked the first weekend I went there,” says Mayberry. “It’s a lobster-catching community, so there are a variety of repetitive injury problems associated with living on a boat for long periods, throwing out and hauling in heavy traps. These folks are very appreciative that I come here to treat their conditions. That’s tremendously satisfying for me.”

Klein, a candidate for the 2017 top 50 CEOs in Atlantic Canada, emphasizes that the corporate culture at The Town Chiropractor thrives on offering new chiropractors a ton of respect and equality.

“The average grad earns less than $25,000 their first year out of college, according to practice management experts,” he cites. “At Town Chiropractor our first-year associates earn an average of $60,000. Our chiropractors currently see approximately 120 new patients per month. Our organization has gross billings of $2 million, we serve 5,000 people a year and we perform approximately 20,000 treatments annually. That’s great experience to bank on. But our challenge remains that we still don’t have enough staff to cover all the demand our company generates.”

Hoyt, who also works as a vice-president in a major insurance firm when she’s not out on the riding circuit, expresses gratitude to Klein. Last October, she rode in the The All-American Quarter Horse Congress held in Ohio, one of world’s largest single breed-horse shows. She placed in two top-10 events: in the 2-year-old Non-Pro Hunter division and the Under Saddle Limited and Open Division. “I couldn’t have done that without the treatments I receive from Dr. Klein,” she says. “I call him my miracle worker.”

Jack Kohane is a Toronto-based freelance journalist writing for several national  health-care magazines and the National Post.
Print this page