If you ask an aging adult what one of their greatest fears is for their years ahead, the common answer is dementia.

The inability to recognize loved ones, remember important facts of one’s life, or the loss the independence in feeding or dressing oneself is a terrifying prospect for anyone. Alzheimer’s disease is now the third leading cause of death in the US (Bredesen, Sharlin, Okuno et al. 2018). Dementia is an overarching term to describe several brain disorders, of which Alzheimer’s is the most common representing 60-70 per cent of the cases, according to the Alzheimer’s Association.

Mild cognitive impairment (MCI) is considered a pre-Alzheimer’s disease, characterized by memory problems, impaired thinking, language difficulties, disorientation in time and space, poor judgement and impaired depth perception. Approximately 10-15 per cent of those with MCI will continue on to develop dementia, according to the Alzheimer’s Society. In Canada, roughly 747,000 people are living with cognitive impairment or dementia and 70,000 of those are under the age of 65 despite age being seen as the largest risk factor (Chang, Patel, Schulz, 2015). Currently 50 million people worldwide have dementia, which is projected to grow to 82 million by 2030 and 152 million by 2050 (WHO).

The tragic social and economic impact need not be highlighted as the above diseases have likely touched just about everyone in some manner. Where does that leave us for the future?

Currently there are no successful pharmaceutical solutions approved for MCI. Clinical trials on two classes of anti-dementia drugs (cholinesterase inhibitors and glutamate receptor antagonist) have been disappointing (Steiner, Bensoussan, Liu, et al, 2018). Dementia has multi-factorial contributing factors and as a result, a one cause, one cure approach is ineffective. Mono-therapy approaches have not been successful, however there is hope using a multi pronged approach.

Alzheimer’s has been considered one of the “irreversible” dementia’s but looking at the exciting work of Dr. Dale Bredesen, this is now being re-defined. Dr. Bredesen, an expert in the area of neurodegenerative disease, is the founder and CEO of the Buck Institute for Research on Aging, and developed the ReCODE (Reversing Cognitive Decline) protocol. ReCODE addresses cognitive decline from an integrative functional medicine approach and has successfully shown the reversal of cognitive decline in both Alzheimer’s related dementia and MCI (Bredesen, Amos, Canick, et.al. 2016). Dr. Bredesen looks at the disease as physiological imbalances, a synaptoblastic:synaptotrophic imbalance due to metabolic disturbance. Not only has his protocol demonstrated to reverse cognitive decline in areas such as memory but has actually been shown to restore lost hippocampal volume, a key area showing volume loss in Alzheimer’s diseased brains. (Bredesen, Amos, Canick, et al. 2016) It is also important to understand it is difficult to successfully treat something without understanding the true cause.

There has been a shift in the understanding of the role of amyloid-beta plaques and tau tangles in Alzheimer’s disease. Although these are common traits seen in the brains of these patients, their presence is not necessarily the cause of the disease, but rather the brain’s reaction to neurotoxic effects. In fact, amyloid plaques and tau tangles may be antimicrobial, act as binders of divalent metals, and be a response to a reduction in trophic support. The presence of amyloid beta and tau tangles are therefore more of an effect and not necessarily causal. This would explain why efforts focused only on their reduction has lead to poor outcomes.

Addressing MIC or dementia involves a personalized and programmatic approach (Gustafson, 2015). Identifying and understanding the subtypes of the disease aides in directing where to start in the multiple points of repair addressing 36 metabolic imbalances, often referred to as “36 holes in the roof”.

Although there are differences in these subtypes there are also unifying and overlapping causes.

The first step in this approach is identifying the subtype and then taking a wide approach involving genetics and lifestyle factors that include diet, sleep, exercise and environmental exposures. Why is this important as a chiropractor? We have the ability to help guide and address key lifestyle areas with patients, and be a conduit for referral to ReCODE doctors, or become certified in the ReCODE protocol.

The ReCODE protocol looks at 36 metabolic imbalances. First, do not be overwhelmed if this looks to be too large of an undertaking. For optimal outcome all 36 points may be addressed, however as Dr. Bredesen experienced with one of his first cases, addressing 12 of the 36 points may be enough to get over a threshold resulting in momentum like snowball going down the positive side of things (Gustafson, 2015). An important point to remember in this program is the goal is to not only ‘normalize’ metabolic function but to ‘optimize’ metabolic function. An example of this are the optimal values to aim for in these specific areas:

The therapeutic systems below look to address the 36 holes identified in the protocol first developed and published in 2014. Table 1. Therapeutic System 1.0 (Bredesen, 2014). 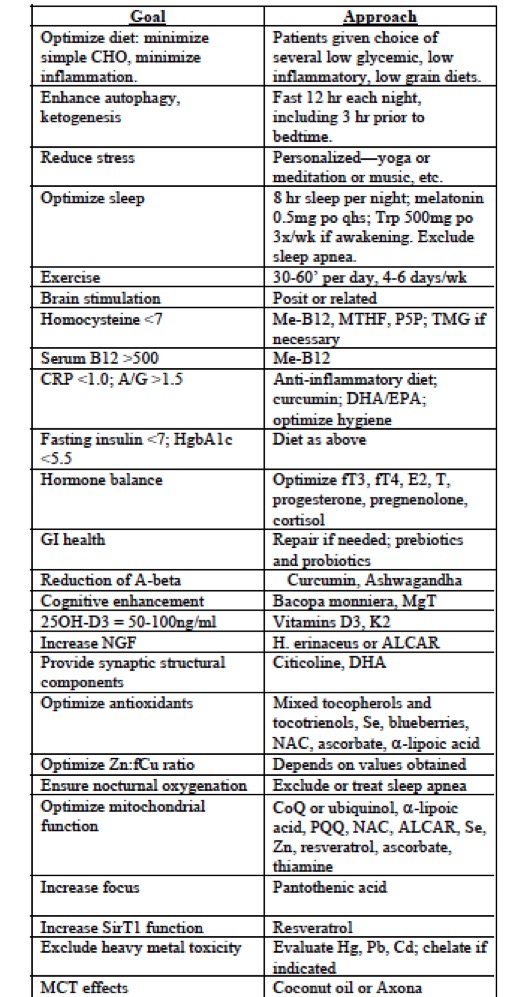 The processes are complex and interconnected, addressing the list below helps to simply the approach in a step by step process for repairing the 36 holes. Using Dr. Bredesen’s analogy of getting the snowball rolling into a positive direction, one step builds on the other and the threshold for improvement is individually determined.

A case study
What exactly does the protocol entail? It is important to remember each case is individualized based on the subtype and presentation. The best way to demonstrate the protocol is by one of the published case studies in the original 2014 paper (Bredesen, 2014).

Results
After 6 months on this program the patient, his coworkers, and his wife all noticed marked improvement. He reduced his weight by 10 pounds. Recognition of faces returned, his memory for work schedules returned as did his ability to quickly add numbers. The rapid and significant cognitive decline in the past few years halted.

This demonstrates just one of many cases responding to the ReCODE protocol. Many of these action steps for repair may not be new to integrative doctors. The avoidance of processed foods, eating more of a ketogenic diet, reducing inflammation, sleeping, optimizing nutrients, and exercising may seem obvious to some, but the key is employing all of these things to repair the 36 holes and aiming for optimal ranges in stated biomarkers.

The diet employed in the ReCODE program leans toward ketogenic. The diet is considered “keto flex” which allows for modifications. The overall 12/3 strategy employees 12 hours of fasting from dinner to breakfast, with food not being consumed three hours prior to bedtime. Stabilizing glucose metabolism and reducing carbohydrate intake, specifically refined carbohydrates is extremely important in reducing inflammation. The downstream effects from this diet are pluripotential. Even if not looking to be fully ketogenic, a diet that is mostly plant based, low carbohydrate, includes healthy fats, and is moderate to lower caloric intake is advantageous over the typical standard American diet.

Role of genetics
One area that could require a full discussion on its own is the role of genetics. Genetics are the “loaded gun” we are handed, so to speak. DNA are the bullets. What causes the gun to fire or certain genes to be expressed is influenced by our lifestyle. The interaction between genes and the environment is termed epigenetics and is an area of growing interest. ApoE4 is the lipid binding and transporting carrier protein apolipoprotein E 4 allele. The relevance of ApoE4 increasing risk for AD has been identified (Theendakara, Peters-Libeu, Bredesen et al. 2018) The presence of ApoE4 is substantially higher in those MCI (Liu, Kanekiyo, Xu, et al. 2013). As with many genes, possessing ApoE4 does not ensure disease expression.

The ReCODE approach is one approach to MCI, and AD. There are several other studies being conducted to find treatments to these devastating diseases. Some of these include natural treatments such as a clinical trial on Sailuotong (SLT), a formula of Panax ginseng, Ginkgo biloba, and Crocus sativus. Preliminary findings suggest SLT improves working memory with larger studies now being conducted. (Steiner, Yeung, Liu, et al. 2016). Another area of interest is Cannabidiol (CBD). The role of cannabinoids as neuroprotectants and CB1 agonists has been encouraging (Maroon J, Bost J. 2018). Further human trials are needed to support the inclusion of these therapies.

The goal of this paper was to demonstrate the multi-faceted approach to a once considered ‘irreversible’ disease process seen in MCI and AD. Dr. Bredesen’s 2014 work provided much needed optimism. Dr. Bredesen continues his work with over 3,000 patients on the ReCODE program. Smaller studies have supported the need for a large perspective randomized, controlled trial using this approach.

As chiropractors, the ReCODE protocol provides several access points to counsel patients and further consider referring them for assessment and intervention using the ReCODE approach. Information on the ReCODE program may be found at ahnphealth.com.

Feng Chang, Tejal Patel, Mary Schulz. The “Rising Tide” of dementia in Canada. What does it mean for pharmacists and the people they care for? CPJ/RPC July/August 2015. 148:4.

BIO
Dr. Victoria Coleman is a 25-year veteran in health care delivery both clinically and in business development. A graduate of the Canadian Memorial Chiropractic College, Victoria has successfully ran two wellness clinics delivering well health care from an integrative approach. Dr. Coleman introduced and was President of Douglas Laboratories/Pure Encapsulations Canada for 14 years and served as VP of Clinical Education for Atrium Innovations. Victoria is also a Certified Functional Medicine Practitioner through the Institute of Functional Medicine. She is holds a Master’s degree in Human Nutrition and Functional Medicine.
Print this page