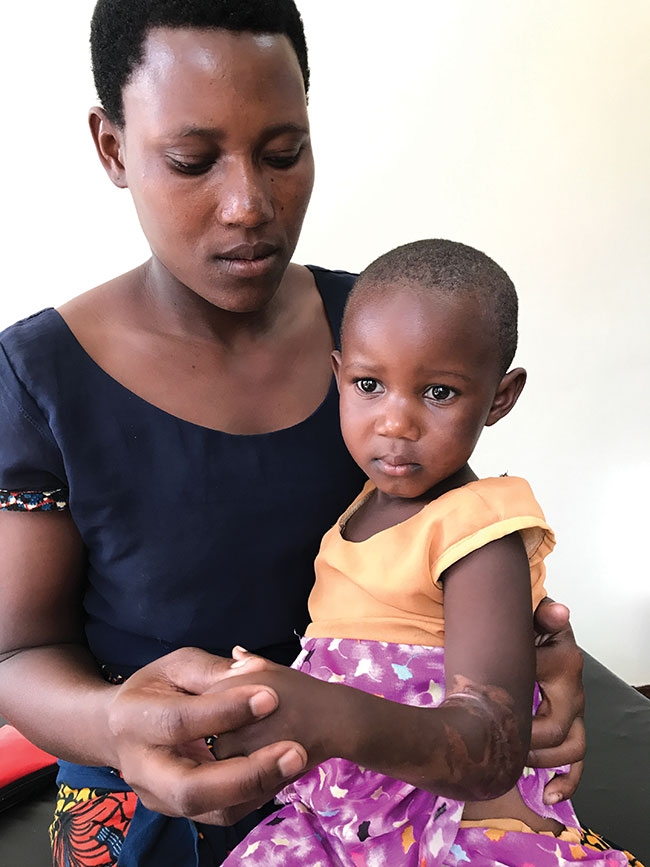 A peaceful country located in east Africa, Tanzania is known for its vast wilderness areas including the Serengeti, and Kilimanjaro National Parks.

What many westerners might not know, is that half of the country’s population of more than 57 million is under the age of 17. One contributing factor to this phenomenon is the staggeringly high number of automobile accidents on the continent, which are now the leading cause of death among young adults, and the number one cause of children being orphaned.

Although young adults are dying in these crashes, the majority of young children survive, and find themselves in need of musculoskeletal care as they recover. A lack of infrastructure and rehabilitation health care services within the country, means those who survive traffic accidents have no guarantee of adequate rehab care.

This need was one of the driving forces behind the establishment of Global Peace Network (GPN), a Canadian charity that has been engaged in health and community development work in Tanzania for the past 12 years. Founded in 2007 by Dr. Daniel Budgell, the program operates the Kanyama Village Clinic, which it built in 2012, in addition to a second clinic established in 2016 on the grounds of the Magu District Hospital. Through their two clinics – operated in co-operation with the district government in northern Tanzania – GPN is able to provide musculoskeletal care and rehabilitation services to children and families affected by physical disabilities. To date, these clinics have served several thousand clients.

Focus on Tanzania
While GPN has had projects in various parts of the world, the charity’s main program is in Tanzania, focusing on health care and education. To reflect this change in focus, they have rebranded the Tanzanian initiative as “Pos+Abilities,” reflecting the positive effects they aim to achieve with children and families affected by disability.

The charity was recently awarded a sizeable grant: $100,000 annually over the next three years. It plans to use the money in order to expand their network of clinics within the country, with a focus on helping children and families affected by physical disabilities. Thanks to the grant, GPN is aiming to expand to 12 clinics, in addition to training a few dozen clinical officers (the primary health care providers in Tanzania) in rehabilitation care.

“Approximately half of our patients are children aged five and under, due to the basic demographics of Tanzania, and the degree to which physical disability affects children,” says Dr. Brian Budgell, director of  both the Global Peace Network and the Life Sciences Laboratories at Canadian Memorial Chiropractic College.

Budgell says the grant came from a foundation with many international projects, who helped to fund GPN’s two initial clinics. The foundation wishes to remain anonymous, but Budgell explains they identify groups they want to support and then ask those groups to submit an application for funding, which is how GPN’s most recent grant was secured.

Thanks in large part to the admirable success of campaigns against infectious diseases such as HIV, AIDS, malaria, and tuberculosis, chronic MSK diseases are now the biggest healthcare burden in east Africa. In addition to motor vehicle accidents, farming related accidents are another major cause of musculoskeletal injuries for locals. This makes the work that GPN’s practitioners provide especially meaningful. To date, this has been achieved through the generosity of volunteer chiropractors and physiotherapists.

“There are so many people who need care, and we are very well-trained to provide that care,” explains Budgell. “There are a great many NGOs operating in Africa and serving east Africa, but not so many that focus on physical rehabilitation.”

Global Peace Network’s Tanzania initiative has rebranded as Pos+Abilities to reflect their change in focus.

Quinn was already volunteering as a physical therapist with World Spine Care (WSC) in Botswana from September to December of 2015, when the clinic director told her of the work he had just completed with GPN in Tanzania. Eager to continue where her colleague left off, Quinn jumped at the opportunity to assist in establishing the Tanzanian Rehabilitation Program within remote communities.

“I decided to participate as this was a rare opportunity to aid in establishing a remote clinical practice, and develop unique community programs within the Kanyama Village Dispensary,” she says. “Furthermore, I was intrigued by collaborating with local practitioners, and to have the pleasure of developing various connections within the community, that included members of Magu District Council, Tanzania Home Economics Association (TAHEA), Village of Hope, and the GPN Clean Water program within local school systems.”

“I found my greatest challenge was developing patience for the pace – it is far from the hustle of North America,” she says. “At times this can actually be welcomed, as you acclimatize to a more relaxed state, and have the opportunity to not only work as a practitioner but also grossly immerse yourself in the rich culture and stunning environment that Tanzania has to offer.”

“I felt very fulfilled providing care to those who would otherwise not have access to these medical resources,” Quinn says. “I encourage any clinician to step outside their comfort zone and volunteer their time overseas with GPN. Regardless of your level of experience as a practitioner, I can assure you that you will provide an invaluable service to this program.”

Chiro in a global health context
Another GPN volunteer (and the colleague who introduced Quinn to the program) is chiropractor Andrew Wilson. Currently practising in Port Elgin, Ontario, Wilson runs his own charity within Nicaragua called Doctors for Doctors & Nurses for Nurses, which sponsors the medical education of high potential youth in rural parts of the country. Wilson and Budgell were discussing their shared interest in international development one day, when Wilson decided he wanted to better understand his own profession within a global health context. Budgell invited him to volunteer his time with GPN, and Wilson accepted.

“I worked as a chiropractor and helped to establish a patient base with the doctors and nurses of the area,” he says. “I would drive the local doctors to make house calls at the end of the day for patients who had trouble getting to the clinic.”

Wilson says that volunteering abroad wasn’t what he thought it would be, and that he learned that what you do matters much less than how you do it.

Quinn agrees that this focus on relationships and community matters just as much as the care the charity provides.

“Living within such a vibrant community afforded me unique opportunities to witness drum performances, snake dancing ceremonies, shop at local markets, and make genuine relationships with colleagues and local villagers who I was fortunate to interact with,” she says.

While Budgell and GPN obviously see the value in the service they provide, he’s quick to point out that they don’t want to be sending volunteers to Tanzania forever, and that the country is evolving and improving very quickly.

“We must plan for that day when Tanzanians don’t need us anymore. Or we need each other equally,” he says. “We want to put in a resilient training program, so that essentially we work ourselves out of a job.”

Thanks to this recent grant, and the charity’s three-year expansion plan, they just might accomplish that goal.

The Pos+Abilities clinic is currently recruiting volunteers with a minimum commitment of three months, with backgrounds in chiropractic, physiotherapy, nursing, occupational therapy, or prosthetics. Additionally, the charity is also looking to hire to a salaried clinic manager to begin work around the end of June/beginning of July. For more information about the position or to apply, please contact Brian Budgell at brian@globalpeacenetwork.ca.

CAITLIN McCORMACK is a Toronto-based freelance writer, specializing in health & wellness and technology content. You can see more of her work at Caitlin Writes (caitlinwrites.ca).