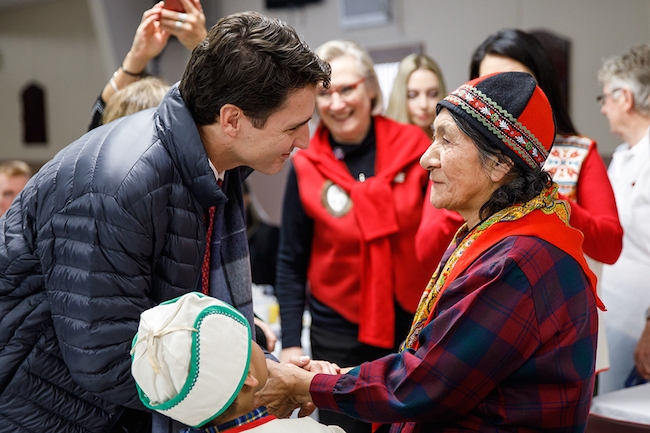 OTTAWA – Canada’s appalling record on Indigenous health is undermining its efforts to be a global health leader. That’s according to research published this week in one of the world’s oldest and most prestigious medical journals, which calls on Prime Minister Justin Trudeau to start backing up his lofty rhetoric with concrete action.

The Lancet, a peer-reviewed journal founded nearly two centuries ago in the United Kingdom, is showcasing the Canadian medical system for the first time in a series of articles and commentary authored by a collection of scholars and public figures across Canada.

The glaring contrast in between Indigenous and non-Indigenous health outcomes is one of the central themes, which include poorer rates of chronic disease, infant mortality trauma, suicide and overall life expectancy.

“It looks to us as though there is a developing country within Canada’s borders,” said Lancet executive editor Jocalyn Clark.

“If you can’t be a leader at home on Indigenous health and equity, how can Canada be the leader we need it to be internationally?” she added. “People are getting really impatient and instead of promise we need progress.”

Clark called Trudeau’s progressive agenda a reason for optimism, adding that now is the time for action as Canada takes over the G7 presidency for 2018.

One of the articles focuses on Canada’s historic role as a middle power that, up until the government of former Conservative prime minister Stephen Harper, excelled at using diplomacy and collaboration to advance global health initiatives, punching above its weight.

But overseas aid development from Canada has declined in recent years, the study finds, with contributions hovering around 0.26 per cent of gross domestic product, placing Canada 15th among the 35 countries belonging to the Organization for Economic Co-operation and Development.

“Canada’s new policy directions must be backed by resources,” writes Timothy Evans, head of health and nutrition at the World Bank, in an accompanying commentary.

“The failure to come anywhere close to achieving the development assistance target … raises legitimate questions about whether ‘Canada is back.'”

Stephanie Nixon, a health researcher and co-author behind one of the series papers, said that while overall aid from Canada may have stalled, the proportion of that assistance earmarked for health initiatives has risen in recent years.

The abdication of international leadership in the era of U.S. President Donald Trump and populist-fuelled turmoil rocking Europe has left a vacuum that Canada is well placed to fill, Nixon said – but Canadian political leaders will have to back up the messaging with action.

“Our sense is that Canada has got its talk right. Now it’s time for Canada to get its walk right as well,” she said.

Another piece in the series charts the development of universal health care in Canada from its origins as a provincial program to cover hospital costs rolled out by then-premier of Saskatchewan, Tommy Douglas. Author Danielle Martin warned that without continuous innovation and update, medicare risks losing relevance.

“You don’t sort of say, ‘Well, we’ve done universal health coverage,’ and then pack it up and go home,” said Martin, a Toronto-based physician and public health scholar.

One concrete step for change is the expansion of medicare coverage to include prescription drugs, she said.

“Imagine an international reader of a journal like this looking at the Canadian system and saying, ‘Wait, what do you mean you have a modern, universal health-care system that doesn’t include prescription drugs?’ No other developed country has made that choice. It’s absurd.”

The series also includes commentary from Trudeau, who lays out his vision for global health and gender equality.

“Everyone benefits when women and girls can participate freely and fully in our economies and societies,” Trudeau said.

Indigenous Services Minister Jane Philpott says in an accompanying note that Canada is quadrupling the number of mental health wellness teams for Indigenous communities across the country and is investing in health infrastructure in the country’s remote regions.

Lancet editor Clark said the series applauds the successes of Canada’s health-care system while at the same time shining a spotlight on some of its challenges, which include coping with an aging population and longer-than-average wait times for elective surgery.

The aim is to showcase Canada to the international community and also push for change domestically, she said.

“I’m a Canadian, so I recognize that in Canada, we tend to be quite insular when we talk about our health-care system,” Clark said.

“As the series argues, Canada tends to be a little too comfortable in its own beliefs about how great its health-care system is. That limits Canada from probably being as strategic as it needs to be on these issues.”