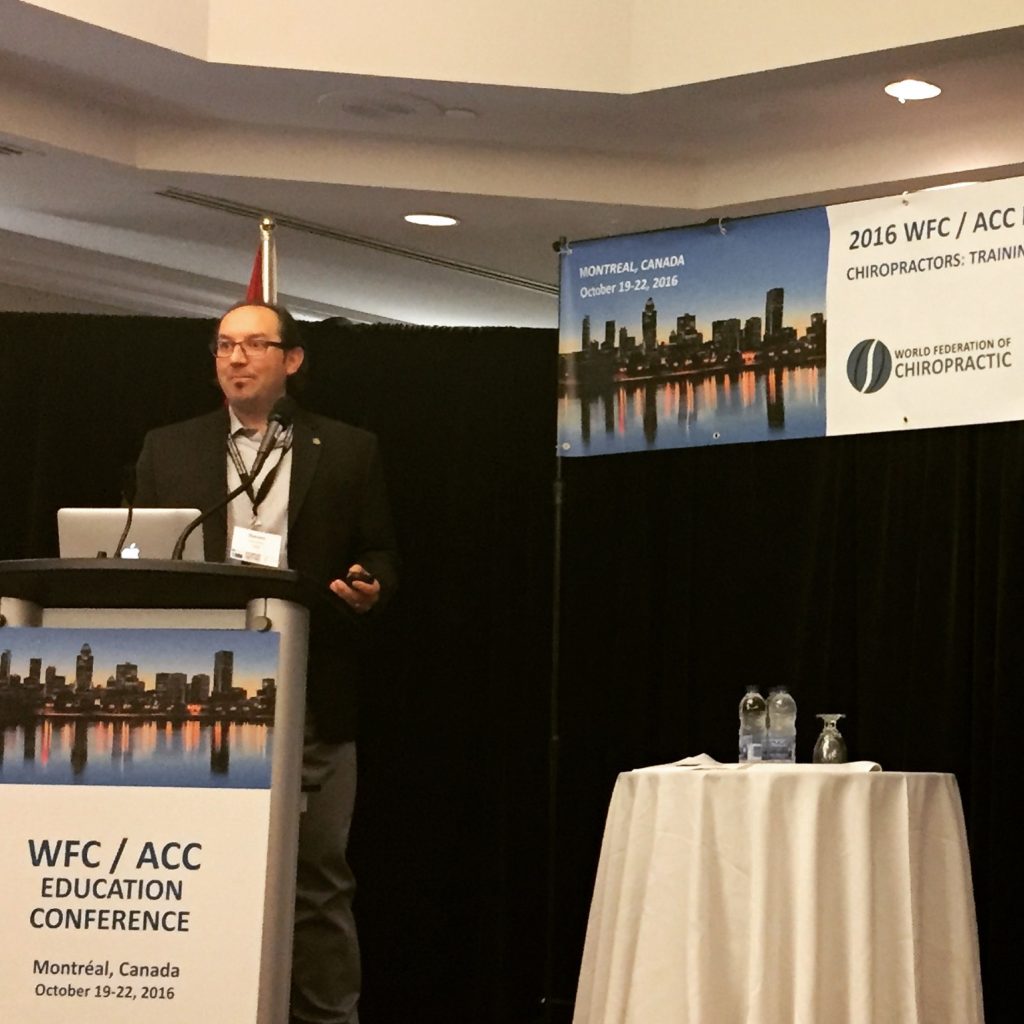 MONTREAL – Equipping students with the knowledge and tools to be able to demonstrate the value of chiropractic in multidisciplinary health care teams will help in advancing the profession as primary spine care experts.

“What if we can show our (chiropractic) students how to collect uniform clinical data on every patient that walks through the door?” Passmore said. “What if we taught our students to be able to use technology to set up a system to record prospective quality assurance data on their patients?”

Citing his experience at Mount Carmel Clinic in Winnipeg, Passmore said data collection is not as complicated as one might think.

Mount Carmel Clinic is a not-for-profit health-care centre serving low-income inner-city residents of Winnipeg. The centre includes a chiropractic clinic, which began as a pilot project in 2010, being run by one chiropractor on a part-time basis, Passmore explained.

Since the chiropractic clinic’s inception, Passmore has been capturing quality assurance data on all patients accessing chiropractic at Mount Carmel.

“We were using a spreadsheet to be able to track the identified patient data on who is being seen, how long they are being seen for, what their diagnoses were, what the course of care looks like for them, what their outcome measures were,” Passmore explained.

“It doesn’t cost a lot of money to be able to set something like that up. It’s really just a matter of trying to figure out what kind of quality assurance data you want to collect – and then you can use that data to understand what your clinic is actually doing and how patients are responding to the care that’s being offered.”

The date provided stakeholders a good picture of the clinical practice and patient care, particularly at the Mount Carmel chiropractic clinic – and enabled Passmore and other clinic advocates to make a business care for continued government funding for the chiropractic clinic beyond the pilot phase.

Passmore pointed out collecting clinical data can be an important initiative toward increasing evidence in chiropractic care, but it’s also something many clinicians are not necessarily doing.

“It doesn’t take a huge amount of expertise to be able to manage the data that’s being collected,” he said. “It’s a very powerful tool so my hope is that some of the people that were in the room today will be able to… make a decision about how to implement that kind of big data collection in their own facilities, in their own countries, in their own clinics, so that we can create a fairly large standardized database… to be able to, five years from now, look back and say, ‘We created data that was uniform in 15 different countries on hundreds of thousands of patients and these are the outcomes that we’ve seen.'”

This kind of data collection is what Dr. Michel Tetrault intends to pursue at several government-funded rural health clinics in California that he works with through his the Chiropractic Community Health Alliances (CCHA).

“We realized, as much as there’s been a lot of talk about getting the research and the data out, we haven’t found the vehicle or haven’t found the funding for it. I am encouraged by the fact that it’s already been done in Manitoba and we can follow that portion of the template and replicate that,” Tetrault said.

Related
Business case for patient-centric franchise
Health care for everyone
Business Talk: Reviewing our ethical business practices
All about the patient