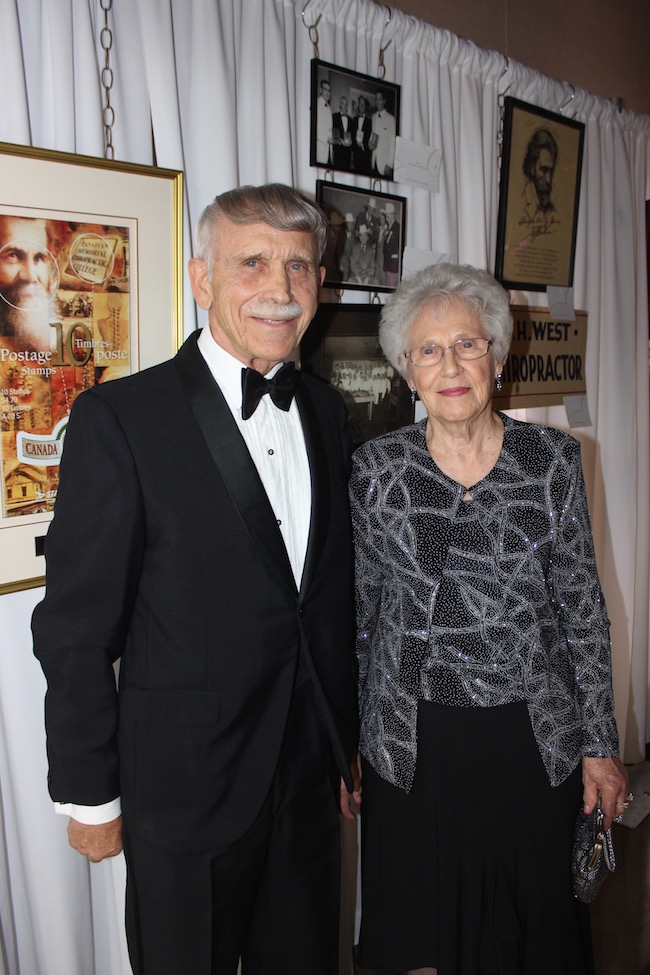 Dr. Metro Kuruliak with wife Joyce during the ACAC centennial gala where he received a special award for being the longest serving ACAC member in its centennial year

CALGARY – Solid succession planning and a marketing strategy that’s built around market research are the key pillars that the Alberta College and Association of Chiropractors (ACAC) leadership is attributing to the profession’s continued progress in Alberta.

The ACAC celebrated 100 years of chiropractic in the province with a centennial gala dinner held on May 13 at the Calgary Commonwealth Centre.

The ACAC was formed in 1917 by 12 pioneering chiropractors. Six years later, Alberta became the first province to legislate chiropractic. To date, there are 1,070 active chiropractors in the province.

“We have a healthy environment for chiropractic practice in Alberta,” Dr. Chad Kulak, president of the ACAC, said in an interview with Canadian Chiropractor. “We’ve had a marketing program that has been robust and is almost 20 years… It is essentially driven by market research.”

In his address at the centennial celebrations, Kulak told attendees the ACAC will ramp up efforts to continue to engage its members, especially with the hiring of its new CEO Sheila Steger, who officially assumed her role in the beginning of May.

Alberta has enjoyed a relatively high chiropractic utilization rate, which is currently around 25 per cent. Dr. Clark Mills, a former president of the ACAC, attributes this success to a decade-old marketing strategy that is driven by market research.

Succession planning is also key, he added. “We have worked hard to maintain a solid succession plan in our leadership and that has ensured us that a solid agenda can continue on even though the players will change.”

At the centennial gala, Dr. Metro Kuruliak was given a special award for being the ACAC’s longest serving member in its centennial year. Kuruliak has been in practice for 60 years. The ACAC also announced it will rename its scholarship program after Kuruliak.

In an interview, Kuruliak said chiropractic has come a long way from when he started practice and charging patients only $2 for workers’ compensation-related visits. He has also seen how the attitude of the public and health-care community toward chiropractors has changed overtime – from being ridiculed and accused as “quacks” to now being recognized as part of collaborative health care.

“There has been a tremendous amount of recognition now compared to how it was when I got started,” he said. “When I started in Alberta, the survey indicated that only less than 10 per cent knew anything about chiropractic.”

Dr. Richard Brown, secretary-general of the World Federation of Chiropractic, was among the guests during the centennial celebrations. In congratulating Alberta’s chiropractors, he commended the ACAC for its efforts in raising awareness about and utilization of chiropractic in the province.

“Over the last 100 years, the ACAC has done what they do with love and inspiration,” Brown said, adding the ACAC should be looked at around the world as “an example of best practice on how to run an organization.”