Developments in chiropractic in the last two decades 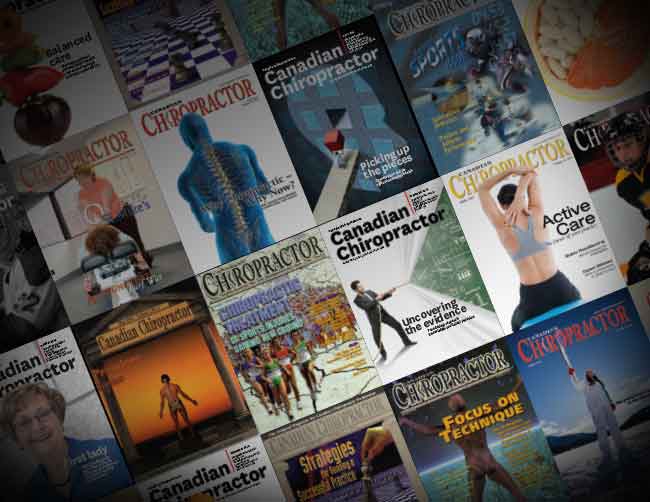 For the last 20 years Canadian Chiropractor magazine has been covering and reporting on developments in and around the Canadian chiropractic community. And there have been many to report on as the chiropractic profession witnessed and became part of the continuously changing dynamics of health care.

Founded in 1996, the launch of Canadian Chiropractor magazine marked the chiropractic profession’s entry into a new century after celebrating 100 years of existence in 1995.

“It seems fitting to launch Canada’s first ever trade magazine [for chiropractors] at the dawn of the next century,” wrote the magazine’s founder Dr. Ian Horseman, of Peterborough, Ont., in the inaugural issue.

“The intent of this magazine is to provide a much-needed and unbiased Canadian forum for chiropractors, on a variety of subjects that affect every one of us across the country.”

Industry observers say the last two decades saw the profession progress into a more recognized and significant player in integrated health care and has also come a long way in many aspects – so did the magazine.

Several factors have contributed to this progression and Canadian Chiropractor talked to some veteran practitioners who have observed and participated in many of the significant evolutionary developments in recent chiropractic history.

Science and practice
One factor that significantly helped propel chiropractic toward mainstream health care is the emergence of research and evidence demonstrating the efficacy of chiropractic care.

“When I think about the research we had going on 20 years ago and the research that is going on now, it’s worlds apart,” notes Dr. David Leprich, a chiropractor from St. Catharines, Ont., who has been in practice since 1978. “That is something that really could help put chiropractic where it needs to be.”

Although there has been a surge in research activity in the chiropractic realm and an increasing number of practitioners pursuing scientific studies, “It’s something that I think needs to grow more,” Leprich points out.

According to the Canadian Chiropractic Research Foundation (CCRF), only less than one per cent of the profession is actively engaged in full-time health research currently. Through its university-based chiropractic research chair and professorship program, the foundation hopes to “address this inequity.” The CCRF has been providing funding for chiropractic research projects since 1976.

The landscape has changed significantly as well for the practice, according to Leprich, particularly in Ontario.

“When I started my practice in February 1978, there were not very many chiropractors – I think [there were only] 700 chiropractors in Ontario. And now I think we’re about 4,000…” that has been a huge change and that has a huge impact on how people do in practice now,” he comments.

The views of the larger medical community toward chiropractic have also evolved over the last several years, he notes. In 1978, Leprich recalls, having a conversation with a general practitioner about a patient or health care was something that “just didn’t happen.”

Today, patient referrals to chiropractic by medical doctors are happening to some degree. Multidisciplinary clinics, where chiropractors and other health-care practitioners are co-located and practicing integrated health care, are also increasing in numbers.

“Chiropractors now have a much more science-based education, much more evidence-based, and as a result of that we are seeing a lot more cooperation with physicians,” Leprich says.

Although MD referrals are already taking place today, the veteran chiropractor admits, they don’t happen very often – not as much as many in the profession would like. There are still some family physicians “who have the old attitudes and the old opinions” who would never refer to a chiropractor. It’s the younger generation of doctors who are typically more inclined toward interprofessional collaboration and more aware of what chiropractic can offer in patient care, he says.

With progress come great challenges as well. In the chiropractic realm, patient utilization rate has remained generally constant over the years – between 12 and 15 per cent – despite dramatic growths in the number of DCs and the increasing recognition by the health-care community. This is especially true in Ontario, where nearly 60 per cent of all Canadian DCs are practicing.

“It’s a negative thing, but it’s a fact,” Leprich notes. “It doesn’t seem to matter what we say or what we do, the utilization rate just has not increased.” He acknowledges there are other areas in Canada that have a relatively higher utilization rate (i.e. Alberta, B.C.), and there are also areas where it is lower (i.e. Quebec, Atlantic Canada).

Leprich believes it has never been more vital for new chiropractors to not only have the clinical skills but also the business savvy to run a practice – and they need to be proficient in both from the get-go. For one thing, students are graduating with a significant amount of debt load, he notes.

“When I entered practice [more than 30 years ago], I could afford to learn by trial and error. I had some debt but not much. I bought a building; I had a mortgage to pay. There was some pressure on me to get going. But nothing, nothing like what people face today,” Leprich says.

Opportunities
Despite the challenges and increasing competition, the last couple of decades also saw some new and emerging opportunities for chiropractic to flourish and make its mark. One area that has significantly grown in recent years is in sports medicine.

Chiropractic has really taken off in the sporting world, not only as a treatment for sports-related injuries but also for maintenance care and performance enhancement.

“Over the past 32 years [RCCSS] has done a tremendous amount of liaising with various national bodies, such as the Canadian Olympic Committee (COC) and other sport organizations which has really helped our profession evolve and develop and find our niche within the sporting community,” Seaman explains.

In addition, chiropractors have increasingly become involved with local and national athletes, sports teams and sporting organizations. It is not uncommon today to find chiropractors volunteering their time and clinical skills to providing care for athletes, not only during specific sporting events but on an on-going basis.

Seaman says progress in sports chiropractic can be traced back to the ’80s, when many athletes were trying to find ways to make their training more efficient and “provide them with some type of an edge, if you will.”

“If you look at chiropractic from strictly a biomechanical perspective, you can see how the athletes would look at it and see that… chiropractic is a great way to treat injuries, but it’s also a great way for avoiding injuries and also performance enhancement,” he explains.

He adds, “if there’s a restriction in mobility of an athlete when they are doing sport… which is caused either by joints and/or muscles, treating it from a chiropractic perspective can improve the mobility. If there’s improved mobility, there’s better efficiency of movement… then the athlete will be able to perform the movements of their sport more effectively and more efficiently.”

Meanwhile, the initiatives of RCCSS in engaging the sporting community in the higher level and the increasing participation of chiropractors in their respective local athletic communities through volunteerism started to really bear fruit in the late 1990s to the early 2000s, Seaman recalls.

For the first time in the history of Canadian chiropractic, chiropractors were named to the core medical team for Team Canada: first, at the Pan American Games in Winnipeg in 1999, and then at the 2002 Winter Olympics in Salt Lake City. Seaman was the chiropractor for Team Canada at the 1999 Pan Am Games and the 2002 Olympics, where he was also joined by Calgary-based chiropractor Dr. Greg Uchacz, another RCCSS fellow.

Since then, chiropractors have constantly been named to core medical teams for major international and national sporting events.

The last eight to ten years saw a shift in the trends, however, Seaman says.

“It started around 2006, with the Torino Winter Olympics,” he recalls. What the industry saw at that time were individual national sport organizations bringing their own medical teams to major games. The skating team within Team Canada, for example, would bring its own set of health-care providers – which often include a chiropractor – instead of relying on the COC-led core medical team.

“[The teams] will tend to take the health-care professionals who are working with them on an on-going basis, so the advantage to the athletes is that they are dealing with the same people through the season as well as major events like the Olympics.”

The upside to this emerging trend is that chiropractors working with national teams have the opportunity to develop deeper relations with the athletes and the athletes have a greater appreciation for what the chiropractor can do for them on an on-going basis, Seaman explains.

The downside, he points out, is that it creates lesser opportunities for DCs to participate in the already-shrinking core medical team.

Seaman says it was a rewarding experience. “It provided a lot of positive feedback for chiropractic care because a lot of health-care professions and a lot of the government-level [officials] aren’t used to seeing a chiropractor in that role.”

At the time, the profession was naturally disappointed and saw the development as a setback for practice growth and public credibility. Leprich, however, believes that, in the long run, delisting chiropractic services from public funding actually “turned out to be a good thing.”

Having practiced through both eras of publicly funded and unfunded chiropractic service, Leprich says the delisting of chiropractic allowed patients to claim the full amount of the service through their extended health insurance.

“When we had OHIP, I would have patients come into my office and say, ‘I have coverage for chiropractic through my work benefits program,’” Leprich recalls. But OHIP did not allow patients to access extended health benefits until OHIP allocation has been exhausted. For example, if OHIP paid $9.65 per treatment and a chiropractor’s charge is $12, patients would have to pay the difference out of their own pockets.

“But when OHIP was taken away, these insurance companies now had the ability to step up and pay from first day – it was called, ‘first day coverage.’ They didn’t all do it at first, but now it’s pretty much universal.”

“Being delisted actually removed some of the financial barriers to people coming in [for chiropractic treatment],” Leprich says.

In hindsight, although it became a big concern at the time, Leprich believes defunding chiropractic did not have any significant impact on practice in general. “I don’t miss it one bit,” he quips.

Mari-Len De Guzman is the editor of Canadian Chiropractor magazine. She has been a journalist for more than 20 years and has worked as editor of several business and professional publications. Contact her at mdeguzman@annexweb.com.