Your 13-year-old son has a 53 degree thoracolumbar scoliosis and is about to enter his growth spurt. What would you do? 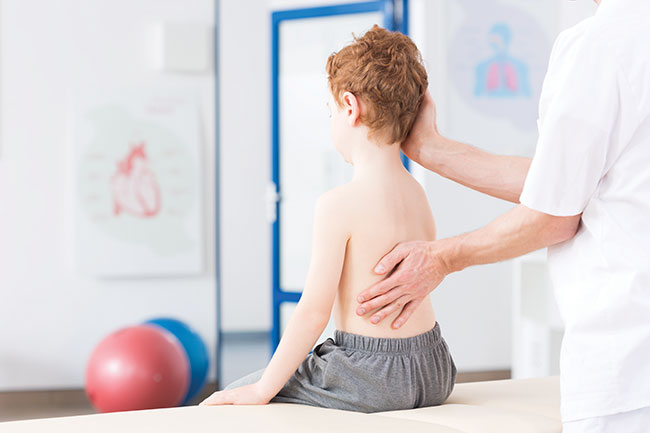 Many of the chiropractic treatments for scoliosis were developed about 30 years ago Photo: © Photographee.eu / Adobe Stock

Two years ago, our family doctor caught the initial 24 degree curve after a routine chest X-ray for a lingering cough. In retrospect, I often look back on what I have learned since that heartbreaking diagnosis and kick myself for missing all the signs that were staring me in the face for years. On the top of that list were his thoracic hypokyphosis and cervical kyphosis, the former the biomechanical hallmark of scoliosis progression, the latter, a proximal junction compensation pattern to the former.

After moving on from the guilt of missing it earlier, I started to research all things scoliosis. Yes, I’m an experienced chiropractor, but I rarely see scoliosis in my corporate practice with Rogers Communications (21 years) or my private practice (28 years). I’m ashamed to say that I can’t recall being taught anything about scoliosis in chiropractic college and certainly nothing about scoliosis treatment. It might seem pathetic, but I turned to Google for answers. Of course what I found scared me even more. I found a lot of misinformation in general with miracle cures, but also conflicting studies from apparent scoliosis experts and researchers on PubMed. The lack of consensus was everywhere.

The most common medical management of adolescent idiopathic scoliosis (AIS) is bracing followed by a wait and see approach and if the curve progresses to 50+ degrees, then either live with the curve or opt for posterior fusion with rods and screws as the end game. Neither were great choices. In my son’s case, it took three months to get a referral to a local pediatric spine surgeon and another month to get a Boston-type symmetrical brace. I was far from impressed by how the first spine surgeon managed my son’s care with an outdated brace design and dubious follow up plan. In the meantime, his curve had more than doubled to 53 degrees into surgical range. Those four critical months were completely wasted. Unfortunately, this is an all too common scoliosis story.

I was completely frustrated, angry and looking for help. I reached out to Toronto’s Sick Kids hospital for a consultation. I consulted with chiropractors throughout North America. Many of the chiropractic systems for scoliosis can be traced back to a posture system developed by Dr. Burl Pettibon about 30 years ago. I also reached out to physiotherapists who were experienced with scoliosis-specific exercises including Schroth therapy. I also sought better bracing treatment by speaking with several orthotists (brace makers) from across the US and Canada.

Six months post-diagnosis my son was fitted with a Rigo Cheneau asymmetric brace from who I feel is one of the top orthotists in North America, Luke Stikeleather based in Virginia, USA. With a combination of daily physiotherapy specific scoliosis exercises, traction and muscle work, my son saw a 20% curve reduction from 53 to 42 degrees in three months, which was excellent considering braces are designed to stop progression and not to correct the curve.

I was happy for my son and proud of his dedication to a daily regimen of one hour of exercise and treatment seven days a week for three months. This was in addition to being braced 21 hours a day which is horrific to witness, much less partake in. Unfortunately, I knew these results wouldn’t last. He was entering his growth spurt and he had atypical scoliosis. His spine was stiff with a thoracic lordosis and I knew the bracing, exercise and conservative treatments would fail.

I started doing more surgery focused research. I even lurked on Facebook scoliosis forums to see how other scoliosis patients with severe curves were trying to manage their own care. Ridiculous?  Actually, these groups were the most helpful. They shared information on non-fusion surgical scoliosis correction techniques that use screws and cords to maintain spine flexibility.

Vertebral body tethering (VBT) uses polyethylene terephthalate (PET) cords instead of metal rods to correct a scoliotic curve. The basic idea is quite elegant. Screws are inserted into the convex side of each vertebrae along the span of the curve. Cords are tensioned between each vertebrae to align the vertebral discs which reduces the curve.

This technique harnesses the Hueter-Volkman principle of bone growth modulation which proposes that bone growth is retarded by increased mechanical compression, and accelerated by reduced loading in comparison with normal values. VBT is primarily for adolescents that are still growing. As they continue to grow post VBT, the discs and vertebrae will maintain a more symmetrical shape which will stabilize the cure once bone maturity has been reached. Fusion is avoided altogether. This sounded like a solution!

Via e-mail, Linkedin, Instagram and Zoom, I began reaching out directly to spine surgeons across Canada, the USA and Europe. These specialists were the most skilled in non-fusion scoliosis surgeries and I sought a consensus of opinion. Six consultations later, we drove down to Shriners Hospital for Children in Philadelphia to see pediatric orthopedic and neurosurgeon, Dr. Amer Samdani.  Dr. Samdani not only led the research necessary for the FDA VBT approval (summer 2019), he had also performed over 250+ VBT surgeries. His clinical decision making, experience and expertise meant everything. On Labour Day 2019, he accepted Jacob as a surgical candidate for VBT and in December 2019, my son had VBT surgery.

One and a half years later, my son’s curve is down to 24 degrees from 53 with a fully mobile spine.

Everyone’s influences and approaches will differ, and chiropractors, naturopaths, osteopaths and physiotherapists will lean on their experience and training to try and find a solution. But what about parents and patients? What should they do, and who advocates for them? Researching scoliosis treatment options is a challenge considering all the misinformation and lack of consensus on the Internet.

From my own experience, I have learned the best and most relevant data and information comes directly from spine surgeons, especially the ones that publish research papers consistently. This means they follow up with patients long term and are experienced and respected by their peers. My previous consultations taught me so much – why not share these insights with other parents or patients affected by scoliosis?

Last spring during the first COVID lockdown, I reached out to Dr. Ahmet Alanay in Turkey to see if he would be interested in participating in an interview on VBT. Shockingly, he agreed and we recorded a 70-minute interview.  Not only did I learn more about VBT, but the interview gave insight to Dr. Alanay’s thought processes regarding surgical decision-making and surgical approach, but also his personality.  This long format interview reveals much more than a typical 10 minute consultation most patients get with a surgeon. Maybe I was on to something.

The only way parents and patients can advocate for themselves is by educating themselves as best they can. It doesn’t matter if you are a practitioner or a parent. Keep that in mind and it will serve you well.