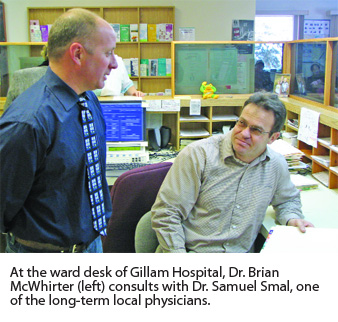 It’s been 14 years since the fall of 1992, when I made my first trip to Gillam.  Six hundred miles due north of Winnipeg, it was the closest I’d ever gotten to the North Pole.

It took six months to convince Manitoba Hydro and the 1,500 residents of Gillam of the benefits of chiropractic.  Clinical space was opened up in the local hospital, thanks to the efforts of the hydroelectric company, which has generously provided chiropractic equipment and an ongoing subsidy for meals and lodging.
Now that my chiropractic associate also goes north, I fly up just once a month.  Together, we serve patients in Gillam at least every two weeks.  In a town which dentists visit only a couple of times a year, people have become accustomed to waiting.

The essence of the North, for me, is sitting on the tarmac as a giant heater hose snakes up to the aircraft’s fuselage to keep the passengers from freezing to death.  In the summer, it is about running from the hotel to the hospital with a towel around my head to keep the black flies off.

Gillam is a unique, modern and affluent town.  Manitoba Hydro employs transplanted urbanites and First Nations people to operate the area’s major dams that are built on the Nelson River system.  When you drive out of the suburban landscape, you are in total wilderness.  When not on duty, I go boating and ice fishing on the beautiful lakes of the Canadian Shield, and enjoy dining on fresh, smoked northern pike.

But the most amazing opportunity comes from working alongside medical doctors in the hospital, which has allowed for incredible co-operation and consultation on patient case histories.

Often, I am called into the MD’s treatment room to render an opinion related to the ankle, low back, shoulder, neck, etc.  The doctors are South African, and the training they received in their home country was apparently free of some of the bias and professional snobbery that may have been imparted in Canadian medical schools.
This rapport with the medical staff has shed light for me on the Achilles heel of our profession, which, in my opinion, is related to public distrust of the greed and self-serving nature of a tiny fraction of chiropractors.

Medicine might have embraced chiropractic more enthusiastically if it were not for the hucksters’ ongoing sales pitch to an otherwise trusting public … with their message that chiropractic has no limitations and will lead to a cancer-free life if patients will only commit to a 90-visit treatment plan, with savings if they sign up today.

Honestly, I have never been more proud to be a chiropractor.  We chiropractors have an incredible base of health-care knowledge.  The power of chiropractic has been more fully revealed to me in the North, as brightly as the lights of the Aurora Borealis.  I have watched patients in severe back pain hobble into emergency and be redirected for their very first chiropractic treatment, afterward seeing them walk right out of the hospital.  The nursing staff and MDs alike have also availed themselves of our care, with great results.  Medicine cannot deny the effectiveness of chiropractic once its own people start to get adjusted.

I remember the truth about my profession when I am in the North.•