Does chiropractic have a role in the Canadian military system? 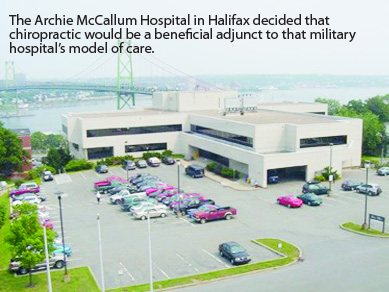 There have been great strides made in the United States in recent years regarding the integration of chiropractic health care into the American military system.  The U.S. Congress continues to push for full chiropractic access in various base hospitals and clinics, despite internal resistance within some of the ranks.  The profession’s many advocates in both the military and in government have worked tirelessly to ensure that chiropractic’s future with the armed forces looks very positive.

However, on this side of the border, there is a little known fact in Canadian chiropractic history that should be brought to your attention; you may be surprised to hear that, since the year 2000, chiropractors have been working in one of Canada’s largest military hospitals.  I know this to be a fact since I was one of the first chiropractors to participate in the pilot project.

The Canadian government did not mandate integration of chiropractic into this Nova Scotian military hospital.  Chiropractic advocates were not lobbying anyone for this important opening for chiropractic.  There was no resistance mounted by hospital staff.

Since the year 2000, chiropractors have been working in one of Canada’s largest military hospitals.

Administrators at the Archie McCallum Hospital at Canadian Forces Base Stadacona, which is situated in Halifax, Nova Scotia, decided unilaterally that chiropractic would be an important augmentation to their model of care, and so they actively sought to form a relationship with chiropractic doctors in the region.  The result is a successful pilot project that has been expanded within the hospital and extended indefinitely, with two chiropractors presently servicing the base.  Chiropractic is integrated into the outpatients department; initially this was on a part-time basis but eventually full-time hours were required, according to demand.  Chiropractors are expected to work with physicians to co-manage patients by providing regular status reports.  Full access to the X-ray department is given, though physician endorsement is required for CT or MRI investigations.  Attendance at rounds presentations is also expected.

To help clarify the potential role of chiropractors in the Canadian military, there came a request for research, which was conducted by myself and two other chiropractors – Drs. Jason Busse and Graeme McBride.  It focused on patient and physician satisfaction with chiropractic services.  The study will be appearing soon in a major U.S. medical journal, selected relative to the content of our study and the exposure it will draw outside the chiropractic community.  Despite the existence of various models of chiropractic within the armed forces of countries such as the U.S. and Israel, there has been very little published on the subject to date.

In Canada, there has been no formal expansion of chiropractic in the military beyond Halifax.  There are, however, a few instances of informal agreements with local chiropractors in other regions of the country.
In my opinion, the best way to drive formal programming is to carry out additional research, and thereby solidify a place for chiropractic in the health care of the men and women who are serving their country.  Personnel in the Canadian Forces have expressed an interest in quantifying the benefits of chiropractic, which presents a great opportunity for the growing chiropractic research community.

Health care in Canada is constantly evolving, and the chiropractic community must continue to strive for new opportunities for our graduates beyond the sole practitioner and associate models to which we have largely been limited.  Our associations and other chiropractic groups have been working hard to facilitate this growth.  It is my hope that the chiropractic model of health care can become a fully integrated aspect of the Canadian military system.  The tools are in place; we just need to open the box and use them.•