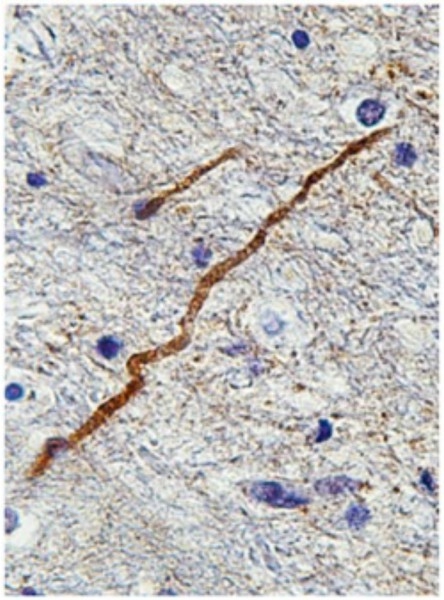 PHILADELPHIA – Physicians and others now recognize that seemingly mild, concussion-type head injuries lead to long-term cognitive impairments surprisingly often. A brain protein called SNTF, which rises in the blood after some concussions, signals the type of brain damage that is thought to be the source of these cognitive impairments, according to a study led by researchers from the Perelman School of Medicine at the University of Pennsylvania, and the University of Glasgow in Glasgow, U.K.

“The brain protein specifically indicates the presence of nerve fiber damage that we call diffuse axonal injury,” said senior author Dr. Douglas H. Smith, MD, director of the Penn Center for Brain Injury and Repair and the Robert A. Groff Professor of Neurosurgery. “Our findings also confirm that even relatively mild, concussion-type brain impacts can cause permanent damage of this kind.”

The results, published online this week in Acta Neuropathologica, suggest that blood tests for SNTF might one day be used to diagnose diffuse axonal injury and predict cognitive impairment in concussion patients.

Traumatic brain injury (TBI) is the chief cause of death and disability among children and adults from one to 44 years of age in the United States, leading to more than two million emergency department visits annually.

“Mild” TBI, or concussion – often defined as a brief loss of normal brain function typically following a blow to the head – is by far the most common form of TBI and frequently doesn’t even receive medical attention. Although it usually makes a full recovery, studies in recent years suggest that roughly one in five concussion patients suffers cognitive impairment lasting several months or longer.

The underlying mechanism of this impairment has long been something of a mystery, since concussed brains rarely show signs of bleeding, bruising or other obvious abnormalities on standard CT or MRI scans. However, in severe and fatal TBI cases, direct microscopic examination of the brain often reveals numerous swollen, degenerating, and even fully disconnected axons throughout the white matter – characteristic of diffuse axonal injury. Many brain injury specialists now suspect that this same type of damage, albeit less extensive, occurs in concussion.

Diffuse axonal injury arises from the sudden movement of the brain in TBI, which rapidly stretches bundles of axons that connect brain regions. Prior research by Smith and others suggests that while affected axons rarely rupture completely at the moment of impact, their sudden deformation causes abnormal inflows of sodium and calcium ions that help regulate a neuron’s function. Investigators surmise that most affected axons manage to pump their sodium and calcium levels back to normal, regain their function, and slowly repair whatever structural damage they have sustained. In other axons, however, levels of calcium become high enough to trigger a self-destruct process, in which protein-breaking enzymes are unleashed, begin to degrade the axonal structure, and ultimately sever the nerve fiber completely.

“Once an axon disconnects and degenerates, it’s never going to regrow to restore that communication pathway across the brain,” Smith said.

Previous work by Robert Siman, a research professor of neurosurgery, has shown that this axon-destroying enzyme activity creates telltale byproducts. One of these is SNTF (alpha II-spectrin N-terminal fragment), which may be useful as a biomarker of permanent axonal injury. In two small studies published in 2013 and 2014, Siman, Smith and colleagues found that blood levels of SNTF tended to rise in the days after a concussion and tended to reach higher levels in people who ended up with greater cognitive dysfunction.

In this new study, Smith, Siman, and their colleagues, sought to confirm that SNTF is a marker specifically of axonal injury in humans and in experimental studies.

In severe traumatic brain injury with many pathological changes, SNTF staining of the brain predominantly identified only injured axons. Similarly, in experimental concussion models, where diffuse axonal injury is the main pathology, SNTF identified only a sub-population of degenerating axons. In addition, in a previous study, SNTF in blood samples corresponded to changes in axon tracts in the brains of concussed patients, seen with advanced MRI techniques.

“This suggests that we may soon have a blood biomarker for concussion akin to the standard blood test used to detect cardiac damage from heart attacks. SNTF in the blood of a concussed individual may provide a specific diagnosis of diffuse axonal injury as well as the process of axonal degeneration,” Siman said.

The team also tested for the presence of a protein called APP, which is currently the standard marker of axon damage in autopsied brains, in sections of brain tissue. They found that there was almost no overlap between damaged axons identified with APP and those stained with SNTF. Smith suspects that APP marks many axons that are injured but have the potential to recover, whereas SNTF specifically marks the minority of injured axons in which the fatal self-destruct process has begun.

“We think it’s probably the end of the road for those axons,” he said.

Through specialized therapies to strengthen brain connections, patients with axon loss and associated cognitive impairments from TBI may eventually recover normal cognitive function. Others never recover fully. For these individuals, there are no evidence-based rehabilitation strategies or therapies currently available.

“We’re starting to believe that the term ‘mild traumatic brain injury’ is an oxymoron,” Smith said. “For some people there’s nothing mild about it.”

Other co-authors of the study are Victoria Johnson, Maura T. Weber and D. Kacy Cullen, all from Penn, and William Stewart from the University of Glasgow. Siman is an inventor on a U.S. patent application for SNTF as a diagnostic and prognostic blood biomarker for mild traumatic brain injury.

Funding for the study provided by the National Institute of Neurological Diseases and Stroke, and the US Department of Defense.