The surprising results of three studies.

This article will examine the results of three studies done at the University of Waterloo by David Bereznick, DC, PhD, Stuart McGill, PhD, and J. Kim Ross, DC, PhD.  The studies were designed to examine some of the main premises of spinal manipulative therapy (SMT), and determine if they stand up to scientific scrutiny.

One main premise of SMT is that the clinician “locates” a motion segment that is “in need of” manipulation, and this is usually determined by palpation.  Spinal joint palpation techniques have been used by manual therapists for more than 100 years in an attempt to assess joint motion, despite problems with reliability (Haas et al., 1995; Keating et al.; 1990; Jensen et al., 1993).

Typically, treatment is then directed at the perceived restricted joint to restore normal function.  This is, however, based on the assumption that, in any joint pair, the geometry is identical.  Should this not be the case, then palpatory findings do not necessarily indicate disease but rather difference in anatomy. Therefore, in addition to reliability, the issue of validity of palpation must be considered.

Articular facet asymmetry of the human upper cervical spine has been recognized for more than 40 years (Singh 1965, Tulsi 1978). The implications of this anatomic observation in the human spine have been considered in relation to joint disease (Cassidy et al., 1992; Malmavaara et al., 1987; Murtagh et al., 1991; Noren et al., 1991; Tulsi et al., 1993; Vanharanta et al., 1993).  Specifically, facet tropism is linked with subsequent degenerative joint disease.  Despite the reliance of manual therapists on joint palpation to determine joint function, the effects of the aforementioned joint asymmetry have not been considered in the interpretation of their findings. 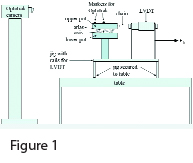 JOINT ASYMMETRY AND PALPATION
In one of our studies, we sought to determine the effects of joint asymmetry on palpation (Ross et al., 1999).  We harvested six atlas-axis joint complexes from cadavers and mounted them in a jig. (Figure 1)  A chiropractor applied a force indirectly to a portion of the jig that housed the atlas. We monitored the movement of the atlas on the axis with an Optotrak camera system and the force with a Linear Variable Differential Transformer (LVDT).  We then plotted medial lateral translation against the force required to produce that movement.  As expected, we found that when the facets were asymmetrical, the forces required to move the atlas a given distance were also asymmetrical.  Therefore, clinicians must realize that perceived restriction does not necessarily indicate pathologic motion but may simply reflect normal anatomy.  Because spinal joint palpation assumes geometric symmetry from left to right and from one person to another, the implications of these data challenge the validity of palpation as a clinical test of spinal joint function.

THE SKIN-FASCIA INTERFACE
The next assumption regarding spinal manipulation was the idea that vertebrae can be moved in any direction.  For this to be true, it is necessary to have an interface between the skin and underlying tissue that exhibits friction.  If friction at this interface is negligible, then the reaction force from the vertebra will be perpendicular to the surface. (Figure 2)  In other words, the only force that the vertebra beneath the surface will experience directly from the chiropractor’s contact is the component that is perpendicular to that surface.  Therefore, some of the force from the chiropractor would be “wasted” as a skin stretch.

Chiropractors routinely attempt to adjust the thoracic spine while taking into account the angles of the facet facings.  Therefore, the clinician applies his/her thrust in a direction of posterior to anterior and caudad to cephalad.  If the skin-fascial interface is frictionless, there would be no advantage in producing such a line of drive.  In fact, since the magnitude of the force experienced by the vertebra would be decreased, such a line of drive would be a disadvantage to a smaller chiropractor who has difficulty generating sufficient forces.

To determine if the aforementioned interface was frictionless or not, we used the following principle.  The force of friction is directly proportional to the normal load  (Ff = µsN).  The term “µs” is the static coeffient of friction. (Figure 3)  Our experimental protocol, therefore, involved loading the spine with various weights and then monitoring how much force was required to move the skin on the fascia .  (Figure 4)  If it is a frictionless interface, it will require the same amount of force to move the skin if a large mass is loaded on the skin or a small mass is loaded on the skin.  To simulate hand contacts, we placed a set of hands made of dental plaster between the jig and the skin.  The hands were in the position of a typical Carver adjustment (for transverse process contact) or Knife Edge (for spinous process contact).  We then loaded the jig with weights incrementally to approximately 85 pounds.  When we plotted force required to pull the jig across the back versus the amount of translation that occurred, the curves were overlapping.  In other words it took no more force to move 10 pounds across the back than it did to move 85 pounds across the back (Bereznick et al., 2002). 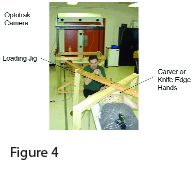 This led us to conclude that the skin-fascial interface in the region of the thoracic spine is frictionless.  This being the case, when a chiropractor applies a force to the thoracic spine, only the component that is perpendicular to the surface will be realized by the vertebra.  Interestingly, when we videotape experienced chiropractors performing thoracic adjustments, we typically see a set-up for the line of drive that is consistent with the facet facings.  However, at the time of thrust, the clinician typically moves their centre of mass directly over their contact and then thrusts perpendicular to the surface of the patient.  Therefore, despite what they were taught, they have learned to thrust in a manner that is more efficient.  It must be noted that a slight cephalad component is necessary for the purposes of skin slack, otherwise the clinician’s hand contact would slide off the intended target.

ACCURACY AND SPECIFICITY
This leads us to the next assumption: Chiropractic spinal manipulation is accurate and specific.  Clinicians utilizing spinal manipulative therapy (SMT) claim to be very specific and accurate with the delivery of their dynamic thrust.  In fact, Meal and Scott (1986) state that “it goes without saying that one of the skills in manipulation is to be able to isolate the effect only on the one joint that needs to be adjusted, presupposing an accurate diagnosis.”

Slow-motion video of side-posture manipulation revealed that, despite the fact that specific contacts were being made, there was also a considerable force being delivered to the patients’ pelvic/thigh region by an impact with either the chest or pelvis of the clinician.  This would suggest a long-lever mechanism, hence calling the specificity issue into question.  At this point we decided to launch into a study that would locate the level of cavitation that occurred during spinal manipulation (Ross et al., 2002).  The manipulative procedures were done by 28 chiropractors with an average clinical experience of 18.2 years.  We used accelerometers to detect the vibration from the cavitation.  The accelerometers were mounted on the back, and the distances between them were noted.  The clinician then chose a target vertebra, which they deemed to require manipulation (through the diagnostic protocol that they typically used in practice).  The manipulation was then performed, and the time at which each accelerometer detected the vibration from the cavitation was determined. (Figure 5)  Simply stated, based on the time it takes for the vibration to reach each accelerometer, and knowing the velocity at which a cavitation travels through a human body, one can use a spatial differentiation algorithm to locate the source of the cavitation. To ensure that the system was valid, we used it to locate cavitations from the metatarsal phalangeal (MTP) joints where we could be sure of accuracy.  In every case, the system located the correct MTP joint.

Editor’s Note: The references accompanying this article appear in full, along with the article, on the magazine’s website, www.cndoctor.ca.