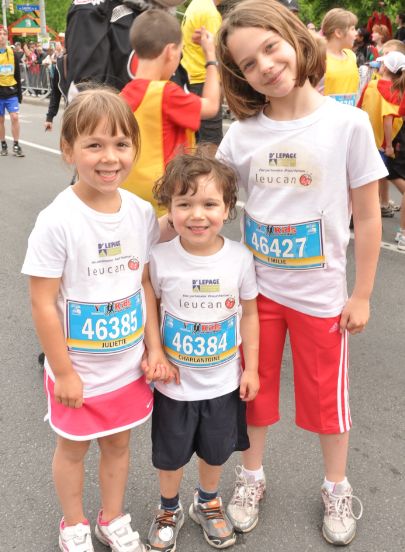 The
funds these children raised went to Leucan, a well-known, non-profit
organization in Quebec
whose mission is to help cancer-stricken children and their families believe in
a brighter future.

At a rate of one or two kilometers
at a time, the three Lepage family siblings had run 41 kilometers since
December 2011. The final 1.2 kilometer race, part of the Ottawa races weekend, allowed them to
complete the distance of a marathon, 42.2 kilometers.

It goes without saying that all
three children crossed the finish line smiling with pride. "This is a
great achievement for them", says Dr. Lepage. "When they ran their
kilometers during the winter, they did not always understand the sense of what
they were doing. On race day however, with thousands of spectators cheering
them on all along the way – and especially at the finish line -, they grasped
the full magnitude of the feat they had just accomplished. "

The St. Lazare chiropractor
completed the marathon, himself, in four hours, eight minutes and 36 seconds.
"It's not very fast when comparing my time to other runners, but for me it
is a great achievement. I managed to finish seven minutes faster than my best
time in a marathon and above all still be fit at the finish line and afterwards
", reports Dr. Lepage.

Along with the races, a fundraising
event was held at the Dr. Lepage Chiropractic Center.  Complimentary
chiropractic examinations including X-rays were given in exchange for a $30
donation. The event also featured a "beat the timer" contest, a
contribution by Massothérapie St. Charles, and a personal contribution from Dr
Lepage.  The event raised $ 1,100 in
total.

Congratulations to Dr. Lepage and
especially to Charles-Antoine, Juliette and Émily!

Related
Running with a smile, following the events in Boston
On The Way to the Niagara Falls Marathon
Cancer Society predicts 1 in 2 Canadians will get cancer
Public Seminar on Children’s Health and Wellness