For this column, I am presenting a brief review/overview of soft tissue calcification. 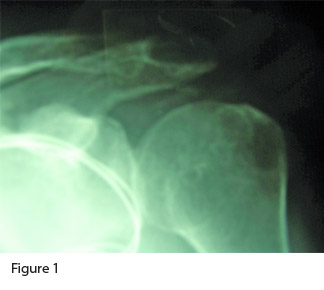 Discussion: Soft tissue calcification involves the deposition of calcium salts into a particular soft tissue, hardening the tissue, and typically permitting it to be visualized on a plain film radiograph.

One method of classification of soft tissue calcification is based on etiology; these three categories are dystrophic, metastatic and idiopathic.

Dystrophic calcification in tendons (e.g., supraspinatus) and bursae (e.g., subacromial and trochanteric) is also quite common, and also follows a degenerative, inflammatory or necrotic (e.g., chronic post-trauma) process.  Clincally, the calcification of these tissues often results in pain and limitation of joint motion.  This calcification represents dystrophic hydroxyapatite depositions (HADD).

Idiopathic calcification is unrelated to degeneration or to serum calcium or phosphorus levels.

Calcification is considered to be ossification when the calcified tissue appears as bone, with cortex and trabeculation.