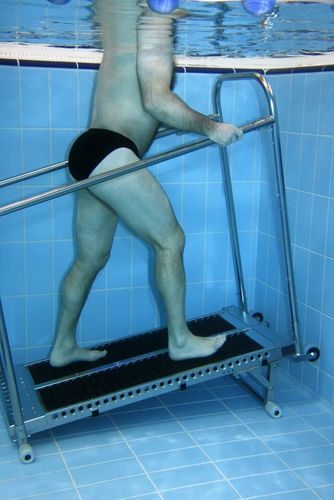 For patients in rehabilitation after a stroke, walking on an underwater treadmill produces better measures of exercise performance compared to conventional treadmill walking, reports a study in the American Journal of Physical Medicine & Rehabilitation, the official journal of the Association of Academic Physiatrists. The journal is published by Wolters Kluwer.

“Aquatic treadmill exercise may be a useful option for early intensive aerobic exercise after subacute stroke, as it may both improve their aerobic capacity and maximize functional recovery,” according to the preliminary research by Dr. Bo Ryun Kim and colleagues of Jeju National University Hospital, Korea.

The study included 21 patients recovering after a stroke – average time since their stroke was about two months. All patients had some walking ability, but with impaired leg movement on the side affected by the stroke.

The patients underwent two exercise tests: one on a conventional land treadmill and one on an aquatic treadmill, submerged in water up to their chests. In both tests, walking speed and slope were gradually increased until the patients felt they couldn’t go any further. Measures of exercise capacity were compared between the two tests.

Even though their exercise performance was higher on the water treadmill, patients felt they weren’t working as hard as on the land treadmill, based on a measure called rating of perceived exertion. “This improved performance may reflect the fact that the aquatic treadmill exercise involved the fluid resistance of the water environment,” Kim and colleagues stated in their study.

Regaining walking ability is a major challenge after a stroke. Because it’s so difficult to walk, patients may be physically inactive, further reducing their exercise capacity. This suggests that early intensive aerobic exercise training might be beneficial in the early weeks after stroke. Treadmill walking is commonly recommended, but may be difficult or impossible because of decreased muscle power.

“The fact that the aquatic treadmill efficiently provides aerobic exercise without requiring full weight bearing means that it may be highly suitable for rehabilitation after stroke,” according to the authors. The buoyancy provided by water reduces musculoskeletal impact while allowing combined aerobic and resistance exercise. Exercising in water also has the psychological benefit of freedom from the fear of falling.

The preliminary study is the first to explore the benefits of aquatic treadmill exercise for stroke patients. Further research will be needed to determine whether this approach leads to lasting improvements in exercise capacity and walking ability, several months after the stroke.

If so, then rehabilitation approaches including underwater treadmill exercise may help to overcome the low aerobic capacity seen in stroke survivors – which can contribute to decreased social activity and poor quality of life. Kim and colleagues concluded, “Aquatic treadmill exercise may not only improve baseline functional status and functional recovery during the subacute period, it may also enhance social participation and quality of life during the chronic stroke period.”