On September 27, 2007,  Dr. Sony Canteenwala of Winnipeg was asked to
present at the Southern Nevada Association of Addiction Professionals
(SNAAP) conference in Las Vegas, Nevada. The event was hosted by the
University of Nevada, Las Vegas (UNLV) School of Medicine at the
Richard Tam Alumni Center on UNLV’s campus. Canteenwala’s topic was
“The Role of the Chiropractor in Addiction Medicine.” 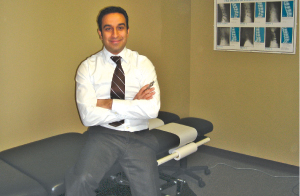 On September 27, 2007,  Dr. Sony Canteenwala of Winnipeg was asked to present at the Southern Nevada Association of Addiction Professionals (SNAAP) conference in Las Vegas, Nevada. The event was hosted by the University of Nevada, Las Vegas (UNLV) School of Medicine at the Richard Tam Alumni Center on UNLV’s campus. Canteenwala’s topic was “The Role of the Chiropractor in Addiction Medicine.”

World-renowned speakers, and leaders in the field of addiction medicine, were also presenting. These included David Smith, M.D., adjunct professor at the University of San Francisco, and Darryl Inaba, PharmD., associate clinical professor at UCSF Medical Center, to name just a few of the esteemed 12 speakers invited to the event.

“It was really an incredible opportunity to share the information we have in chiropractic with the attendees and other guest speakers,” Canteenwala states. “The goal is to bring chiropractic into mainstream care for those recovering from addiction. Although chiropractic has traditionally been thought of as a treatment for musculoskeletal disorders, SNAAP members showed a real excitement for, and acceptance of, the chiropractic involvement in addiction medicine that we presented at the conference.”

So, what is the role of chiropractic in addiction medicine?

Most would wonder what role a chiropractor has in the care of the addicted patient.  This was, in fact, the question and intent behind the invitation extended to Canteenwala by addiction specialist, and professor at UNLV, Larry Ashley.

Canteenwala is the director of the Holder Research Institute Canada, and has been working with Dr. Jay Holder over the past several years. Dr. Holder’s work on the topic of addiction and chiropractic has been published in several referenced journals; he is also the creator of the Torque Release Technique and has been offering programs to professionals from all disciplines in addiction education through the American College of Addictionology and Compulsive Disorders.

Holder had long believed that subluxation-based chiropractic, along with traditional addiction treatment, could help an addiction patient “kick the habit” faster, and more easily, than traditional treatment alone. In 2001, Molecular Psychiatry, a Nature journal published an article showing just that.1 These were the results that Canteenwala presented at the UNLV conference.

The study, done at the Exodus Treatment Center in Miami, Florida, in conjunction with University of Miami biostatistician Bob Duncan, showed some remarkable outcomes for those addiction patients under chiropractic care during a 30 day residential addiction treatment program. The study, a single-blinded, randomized clinical trial, showed that those undergoing chiropractic care, utilizing Torque Release Technique, had a statistically significant decrease in depression and anxiety. As well, the adjusted group made fewer visits to the nursing station during the 30 days. Most significant was that the chiropractic group had an
unprecedented 100 per cent retention rate, with respect to the addiction treatment, a phenomenon not seen in the recovery movement to date. It was these results that caught the interest of UNLV, a flagship institution in the field of
addiction medicine.

Why does chiropractic help?

Making the link between chiropractic and addiction recovery requires an understanding of how addiction affects the brain.

Much work has been done to explain the addicted brain. Today, researchers have discovered that, for most addiction patients, addiction is not a choice but a bodily demand, like eating or sleeping. However, when the brain is “hardwired” for the wrong things, the effects can become fatal. Researchers look at the Brain Reward Cascade, the many neurotransmitters that fire in the brain, setting up a domino effect with resultant feelings of well-being. In the addict, this reward cascade is interfered with, or not functioning correctly to begin with, causing the addict to manifest what is called Reward Deficiency Syndrome, or RDS. In November 2000, The Journal of Psychoactive drugs published an entire journal dedicated to RDS.2
Subluxation-based chiropractic is suggested as a possible treatment option in this publication as well. The idea is that if someone is manifesting RDS, or an inability to manifest a state of well-being on their own, they may be high risk for addiction. Dr. Canteenwala, himself an instructor for the American College of Addictionology and Compulsive Disorders, makes no distinction between different types of addiction.

“Everybody wants one thing and that is to feel good,” he says. “If they do not have the ability to feel well on their own, they are high risk for finding something that will make them feel good. The substance does not have to be drugs; it can be food, alcohol, work, sex or risk taking behaviours, like gambling.”

Canteenwala and Holder believe that the separation an addiction patient feels is caused by subluxations in the spine that interfere with the Brain Reward Cascade, causing Reward Deficiency Syndrome. Thus, the resultant need will be for an individual to escape, or abate, undesirable feelings. Canteenwala, for this reason describes the subluxation as a “separation from wholeness.”

Canteenwala stresses, however, that chiropractic care is not a treatment for addiction, but rather a form of care that allows an individual patient to express a true state of well-being through proper nervous system function.

University of  Nevada, Las Vegas researchers are not the only ones taking notice of chiropractic’s role in addiction medicine. In 2006, esteemed authors, and leaders in the field of addiction medicine,  David and Merlene Miller, dedicated an entire chapter of their book “Staying Clean & Sober: Complementary and Natural Strategies for Healing the Addicted Brain” to chiropractic’s role in addiction and to Holder’s Torque Release Technique. Psychology Today also featured this topic as a frontispiece article in 2007. 3

Canteenwala believes the chiropractor has an essential role to play in helping addiction patients recover.

“We need a multidisciplinary approach to care,” he says. “With the chiropractor being in a primary care role, and having the ability to interface with a significant percentage of the public, we have an opportunity to serve the public, and our patients with a unique and drug-free approach to ‘getting clean.’”

Canteenwala believes the chiropractic profession is positioned perfectly to lead in the role of recovery.

“Throughout the period that we see patients who are addicted, they become calmer, less depressed and less anxious. These outcomes lead to the addicted patient being more able to fully gain the benefits of group, one-on-one and behavioural therapy, essentials of any addiction treatment program.”
In his office, Canteenwala is currently working with many patients who are
addicted.

“All chiropractors in this country are actually seeing addicted patients whether they know it or not,” he notes. “It is estimated that about 20 per cent of the population has an addiction (4) and the number may, in fact, be much higher. Our goal is to train doctors of chiropractic in an in-depth understanding of addiction, and the science behind it, as well as techniques and protocols they can implement within their practices.”

“Of course,” Canteenwala stresses, “none of the work is ‘stand-alone’ and these people must be sent to drug rehab concurrently.”

A call to awareness

In Canada, the average medical or chiropractic student receives very little training in addictions.  As well,  there is a real paucity of information getting out to those in primary care. This is something that needs to change in order to take care of one of society’s biggest problems.

In March 2008, a new diplomate program in addiction will begin for chiropractors in Orlando Florida. The 300-hour course will lead doctors to an in-depth understanding of this devastating dis-ease. “It is imperative that chiropractors distinguish themselves in the field of wellness and state of well-being,” says Dr. Canteenwala,  “and I believe this is the population we need to start with.”

“Politicians, law makers and justice officials are looking desperately for an answer to today’s massive societal problem of addiction. Chiropractors have an essential role in helping to solve this problem!”

Dr. Sony Canteenwala is the Director and lead Torque Release Technique Instructor for the
Holder Research Institute Canada. He is an instructor for the American
College of Addictionology and Compulsive Disorders. Dr. Canteenwala
holds the position of Representative Assemblyman (Manitoba) for the
International Chiropractor’s Association. He currently resides in
Winnipeg, Manitoba and is in full-time, private practice.