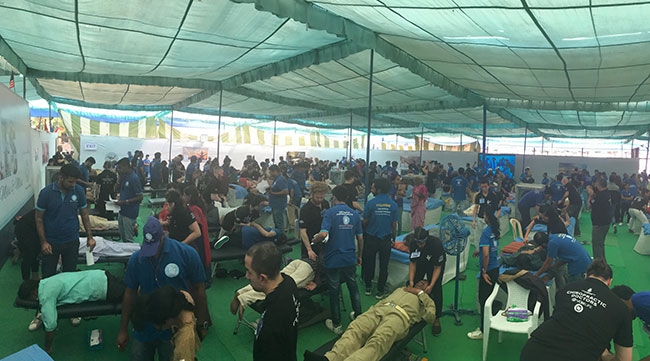 Ever since she can remember, Carol Donohue had wanted to move to India. Growing up in New York, she was always fascinated with Indian culture and found their women most beautiful.

It probably did not come as a surprise to her family and friends that not long after she graduated from Parker University she announced she is going to start her chiropractic practice in Gurgaon, just southwest of Delhi in India.

“It just kind of connected that I could do chiropractic and live in India,” says Donohue, who was recently in Mumbai volunteering with 86 other chiropractic doctors and students from various parts of the world for the Sant Nirankari Mission. In January she started working at OrthoCure, a chain of orthopedic rehab clinics in India.

Donohue is the most recent North-America-trained chiropractor to join the growing number of DCs that have set up a practice in this South Asian nation.

To date, 10 chiropractors permanently practice across major cities in India – all belonging to the Indian Association of Chiropractic Doctors (IACD), a full member of the World Federation of Chiropractic. Launched in 2006, the IACD aims to promote and bring chiropractic to the Indian population. Although one of its ultimate goals is to establish a chiropractic school there, for now the IACD is focused on bringing more licensed chiropractors to practice in India. And with only 10 full-time and nearly a dozen part-time chiropractors, amid a population of more than 1.3 billion, there’s plenty of room for growth.

“We are starting to see more chiropractors coming to India,” notes Dr. Kalpesh Ghelani, president of the IACD. He opened his clinic in Mumbai two years ago and has since been travelling back and forth between India and the States, where he also runs the Meridian Chiropractic clinic in Schaumburg, Ill.

Just in the last six months, three more chiropractors from the U.S. and Canada have set up shop in India, according to Ghelani. The growth may be slow, but there appears to be a swelling of interest among chiropractors from the west wanting to take their healing skills to a country that knows very little about chiropractic but can greatly benefit from it.

Mission trip
Much of the Indian people’s brush with chiropractic is through mission trips. The Sant Nirankari Mission is one of the biggest missions to include chiropractic services in their community outreach. The organization hosts a bi-annual event, called Samagam, that takes place every November in Delhi and January in Mumbai. It is a non-denominational spiritual gathering attended by millions of people from all over India. For decades, the event has provided free medical, eye and dental services and, over the last five years, a chiropractic clinic at the Samagam. That is where 87 chiropractic doctors and students last January volunteered for five days, assessing and treating those who came to the clinic.

Canadian-born chiropractor Dr. Jimmy Nanda views the Samagam as an opportunity to bring chiropractic care to people who may otherwise not have access to it. The chiropractic clinic at the Sant Nirankari Mission is a brainchild of Nanda, initially organizing a few volunteer doctors and students from Canada and the U.S. to participate in their first Nirankari mission trip in November 2013. Since then, Nanda has been leading a steady stream of chiropractic volunteers to Mumbai and Delhi each year. And, even helping some of them transition into fulltime – or part-time – practice in India.

“Life-changing” is typically the phrase Nanda hears from volunteers after serving on the Nirankari mission trip. He shares many of the volunteer doctors’ view that chiropractic principles conform with the beliefs and spirituality of the Indian culture.

“We as Canadians and Americans, we doubt. We have limitations or perceptions of what the expectations are. Here (in India) these people are coming in with complete total surrender. They feel that there is a reason the universe sent the doctors here. So when they go on that table, the expectation is healing. ‘I will get better from that adjustment.’ There’s the big difference,” Nanda explains.

Up to 10,000 people flock to the chiropractic tent during the Nirankari missions to seek chiropractic relief for their conditions – many of which involve knee and back pains.

For student volunteers, the mission is as much an opportunity to serve as it is to learn. Twenty fourth-year students from Life West Chiropractic College in Hayward, Calif., travelled to Mumbai to volunteer for the Nirankari mission in January.

“There are over 500 students that have gone on mission trips like this, and the reason why is the experience they get,” says Dr. Ron Oberstein, president of Life West. “There are thousands of people coming in, with different cases coming in and conditions that they might not see in Hayward, California.”

One of those students is Canadian Arielle Rubinoff from North York, Ont., who is currently in her last year at Life West. She calls the Mumbai mission trip an “absolutely amazing experience.”

“When you’re in school it’s hard to remember the philosophy of chiropractic and the oneness and connection, so that is the biggest thing I’m going to bring back – just a re-energized connection with everybody that comes into my office and comes into my life, and I’m just going to take that as a humbling experience,” Rubinoff says.

Taking care of business
Witnessing the tens of thousands of people lining up for chiropractic treatment during the five days of the Nirankari mission – many of whom suffer from knee, back and neck pains – it’s easy to see how chiropractors would see a need for the profession to take on India. The musculoskeletal conditions brought on by the labour-intensive nature of people’s occupations and regular activities are ripe for chiropractic picking.

Dr. Alison Bale closed her clinic in the U.K. 10 years ago to move to Goa, India, and start a chiropractic practice. She shares the practice with her husband, Martin Bale, a soft-tissue therapist.

Bale is now at the point where she wants her practice to be, but she admits it has not always been easy starting a chiropractic clinic in that country.

“If you look at just purely the chiropractic side, it’s trying to explain chiropractic to an audience that, for the large part, has no clue at all,” Bale explains. Many of Bale’s initial patients were people who had either lived abroad or had family abroad, who was familiar or have had experience with chiropractic. Then it became just word of mouth from there.

Setting up a business in a country that basically has no knowledge about what you do can also be challenging, especially 10 years ago when chiropractic is almost non-existent and the IACD is in its infancy.

Factor in Indian bureaucracy to that equation and it becomes a bigger hurdle to overcome.

“When you’re trying to deal with government, again you run up against the fact that they don’t know what chiropractic is. They don’t have a box for you to land in,” she says, and if they don’t know where to put one’s file it tends to land at the bottom of the pile where the likelihood of it being deferred or ignored becomes higher.

These are some of the challenges that one might come across as a foreigner trying to open a chiropractic practice in India but, Bale stresses, they’re not insurmountable.

A chiropractor with some ties to India, through family for example, may find the transition a lot easier than someone with no connection at all. For those looking to potentially set up a clinic in India, the IACD suggests visiting a few of the existing practices there and doing some research.

Bale, who is also the vice-president of IACD, agrees. It also helps to have a few years of experience under your belt.

“Martin and I benefitted hugely from having run a practice in the U.K., so some aspects of running a small business – bookkeeping, accounting, marketing – it came quite naturally for us,” she says.

“I don’t know whether I would recommend to a new, young graduate, fresh out of college with no business experience, to start with India. It’s not an easy choice, but I love it. If you can make it work in India you can make it anywhere.”

It might be different, however, if one is coming in as an associate to an existing practice, she notes. That kind of opportunity is starting to take hold.

Nearly 10,000 people came to the free chiropractic clinic for treatment during the five-day Sant Nirankari Mission in Mumbai in January.

Global venture
Donohue, who just started her practice with OrthoCure in Gurgaon, may be the first to take advantage of an emerging opportunity for new chiropractors coming to India. Her placement was made possible by the Global Chiropractic Management Group (GCMG), a new venture spearheaded by a group of Indian-Canadian chiropractors: Drs. Vikas Puri, Gina Bajaj, Chandini Bakshi and Nanda.

Puri and Bajaj, both from Brampton, Ont., have been coming to and serving at the Samagam since 2015. Their experiences at these missions only re-affirmed their belief of the need for increased presence of and better access to chiropractic in India.

“Other than just the mission, we want to help bring chiropractic here more actively,” says Dr. Vikas Puri, one of the founders of GCMG. “We do that by approaching private clinics and hospitals and explaining to them what chiropractic is and see if they will have a chiropractor there.”

The group is also starting to recruit potential candidates by promoting the initiative at various chiropractic colleges, trying to gauge interest among new graduates. The idea is to bring in chiropractic associates to work in existing private clinics and hospitals in India.

The goal is to ultimately grow the profession in India, says Bajaj.

“I want to see that we’re in every major city, either in independent chiropractic clinics, in hospitals, physio clinics – wherever there’s a need and whichever way we can serve more people, that’s what I want to see,” Bajaj says.

Like the IACD, this group of Canadians who trace their roots to India, also would like to see a chiropractic college established in the country. This, they believe, can happen once the number of chiropractors in the country has significantly increased and demand for chiropractic services becomes more widespread.

“We very much want to actively be part of any talks that help bring a chiropractic school here,” Puri says.

Facts about India’s health system
Nearly 70 per cent of the population live in rural areas where there are little to no access to hospital or health clinics. This urban-rural divide is due to lack of health care resources and infrastructure in rural areas. (Source: Healthcare in India whitepaper, Columbia University)

Only about 5 per cent of India’s 1.3 billion population are covered by health insurance. This means a huge majority of the people pay for hospital and clinic visits out of their own pockets. (Source: Healthcare in India whitepaper, Columbia University)

There is less than one doctor for every 1,000 population in India. As of March 2017, just a little less than 1.1 million allopathic doctors are registered with the Medical Council of India. (Source: The Indian Express, July 2017)

Most private hospitals and clinics are located in highly urbanized cities. Due to lack of access to modern health care, people living in rural areas rely mostly on homeopathic and alternative medicine to address health concerns. (Source: Forbes India, Sept. 2014)