When I was in high school, a
family trip brought me to Italy for summer vacation. The experience
made me feel that I wanted to return, one day, and do something
important here. When I began training to be a chiropractor, I knew that
was the gift that I was supposed to bring to this country. 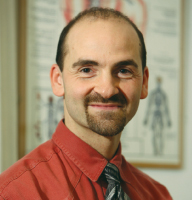 When I was in high school, a family trip brought me to Italy for summer vacation. The experience made me feel that I wanted to return, one day, and do something important here. When I began training to be a chiropractor, I knew that was the gift that I was supposed to bring to this country.

After a long delay in the bureaucratic shuffle – an element that one needs to get used to over here – I finally was granted access to work in Italy.

This access began, for me, like it does for almost every other foreign chiropractor: via a large multidisciplinary clinic called a “static clinic.” (There are around 22 of them in the country.) These clinics prepare the paperwork, etc., necessary for a chiropractor to begin working in the country, and, thereby, “get into” Italy.

STATIC CLINICS
These high-volume clinics are subsidized through the national health system. (All chiropractors who are in private practice in Italy have cash-only practices, with no insurance hassles, etc.)  However, receiving payment for our services, through the static clinics, is actually a rather elaborate process. First, the patient is examined by the clinic’s orthopedist or physiatrist, who then sends a requisition to the patient’s family doctor for a “cycle” of “manipolazione.”  (Typically, a patient is granted eight to 12 visit cycles, up to three times a year.) The MD, then, writes a prescription for care and the patient returns to us.

Patients are often given a “Gonstead” X-ray series. The films are read by personnel, in the clinic, who are trained for this and who also provide us with listings and measurements. (Occasionally, we would get to do this ourselves.)

It is typical to see anywhere from 80 to 120 people in a day at the static clinic. (This is somewhat different from the student clinic experience!) So, one quickly becomes efficient with adjustment skills and time management.

DA SOLO –  MY PRACTICE
However, when we feel we know how things work in Italy, it’s never too long before the “voglia di farlo da solo” – that is, to have your own thing – makes us depart from this clinic. My journey brought me to the Abruzzo region, not far from the Adriatic coast on the east side of the country. My dream was to build a family wellness practice and, so, that is what I created.

I practise Network Spinal Analysis, almost exclusively, and use a number of outcome measures in my initial and follow-up examinations. These include Surface EMG and thermography, as well as certain neurological tests such as “blind-spot” mapping to assess the patient’s progress.

Immediately upon opening my practice, I started what I call the “Tuesday night talk.”  It is a combination of a chiropractic orientation, and an explanation of the exercises that go with Network care and Somato-Respiratory Integration (SRI).

THE PROFESSION IN ITALY
Certain aspects of the chiropractic environment, here, are really quite appealing. Imagine having a population of people who don’t have any preconceived notions as to what chiropractic is!

Of course, one is faced with the challenge of actually getting patients to one’s office but, having been educated in the “static clinic” was helpful in this area. As in most European countries, there is still a fairly high level of  “respect” for any doctor, and even more so if that doctor is a “straniero”, or foreign doctor, because Italians complain often about the “quality” of health care available to them in their country. (Different countries are not so different after all!).

It’s really the “wild, wild west” of chiropractic here. But, we were “outlaws” in this wild west – with no official law for the profession – until recently and, unfortunately, sometimes the “sheriff would came a-knocking” This was the NAS – in simple terms, the “health-care police.” Many chiropractors had their offices closed down, by these agents, for “practicing medicine without a licence.”

These officials were often “sent” by someone – in the health-care field – who had issues with our positive outcomes. The NAS agents knew they had to find something “wrong” to justify shutting the chiropractor down. Some chiropractors had to stay closed for many long weeks, before they could plead their case in court.

Throughout all of this, I would try to “plug ahead” and not worry about that too much. I would just continue doing a good job, and rely on the one thing the Italians are really good at – word-of-mouth advertising. In fact, I would say over 95 per cent of my patients have come from that route.

A law recognizing the profession was finally passed in December of 2007. None of us actually feel different yet – although maybe a little less paranoid.

As fate would have it, things often come full circle and the power of love is actually bringing me back to Toronto again! So, I will have to start a new chapter in my chiropractic career. I hope I can bring back the same life-changing and influential passion that I have had the opportunity to express here, in Italy, over the past several years.