Apr. 25, London, Ont. – On Friday,
April 19, Pure Encapsulations, a manufacturer of research-based,
hypo-allergenic nutritional supplements located in a Boston suburb, with its
Canadian base in London, Ontario, held an event to honor and support victims of
the tragic events surrounding the Boston Marathon. 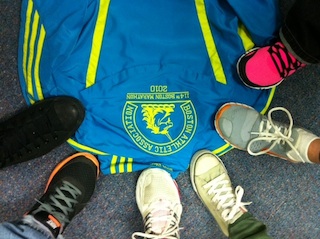 As a
tribute, Pure Encapsulations’ employees wore running sneakers to work and
walked a miniature marathon route on business grounds. At the symbolic yellow
and blue finish line, employees were encouraged to express sentiments of
support to those affected by leaving messages written in chalk. The event began
at noon, with a moment of silence.

All
contributed funds were donated directly to The American Red Cross of Eastern
Massachusetts, Boston’s local chapter, or The One Fund Boston, Inc, established
to raise money for the victims

“We are
shaken as both a company and community to see one of Boston’s greatest
traditions shattered by such senseless violence,” said Joy Devins, Vice
President of Pure Encapsulations. “To honor the spirit of this event in our
beloved city, we wanted to do our part to support the victims, and their
families, and the first responders involved in that day’s tragic events.”

“We are
a family,” said Pierre Fitzgibbon President and CEO of Atrium Innovations. “By
making PureLove for Boston an Atrium-wide effort, we proudly demonstrated our
solidarity and ability to make a positive impact in the communities we serve.”

Through
The PureLove For Boston Fundraiser, Pure Encapsulations hopes to inspire others
to donate to their local Red Cross chapters for emergency and disaster
preparedness, or to The One Fund Boston, Inc.