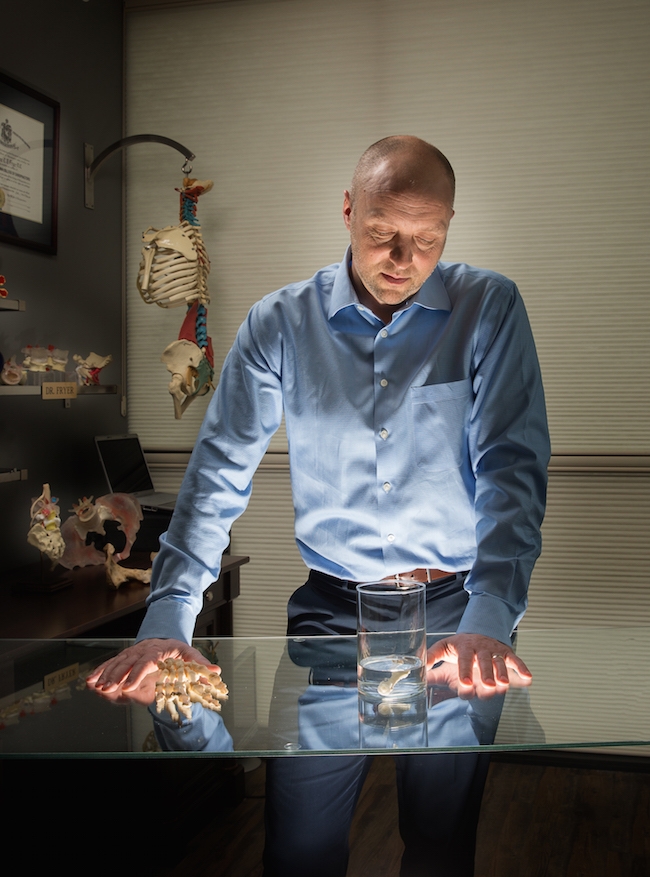 A new paper in the Journal of the Canadian Chiropractic Association indicates that the most widely accepted theory to date of joint cracking fails to explain why joints produce sound when cracked – and may lead to inaccurate predictions relating to health outcomes.

The Nanaimo, B.C.-based chiropractor’s professional interest stems from his research and practice in the field of chiropractic. However, as the subject of a 2015 study on joint cracking that he co-authored with University of Alberta professor and chiropractor Dr. Greg Kawchuk, he demonstrated an uncanny ability to crack his knuckles on demand.

Fryer is also the primary author of a new study recently published in the Journal of the Canadian Chiropractic Association that challenges the chiropractic field’s current understanding of the factors that cause joints to crack.

“I’m interested in knuckle cracking because it’s an easy way to study spine cracking,” Fryer says. “Knuckles are easy joints to access and test, but everything we learn from knuckles can be extrapolated to the spine.”

Fryer’s new study examines the mechanism of joint cracking using five in vitro joint models, drawing from his previous work with Kawchuk to further make use of the methodology that he’d perfected.

“During the Kawchuk study (“Real-Time Visualization of Joint Cavitation”), I used a dry suction cup release to represent the sound similar to a knuckle crack,” Fryer explains.

“After that study, I decided to introduce fluid into the model. Through trial and error, the model created a popping sound and exhibited a refractory period (just like a real joint).”

Challenging established science
Dr. Jacob Jaremko is a radiologist and associate professor in the University of Alberta’s Faculty of Medicine and a co-author of Kawchuk’s 2015 study. Jaremko notes that the 2015 study disproved a critical element of what was then the most widely accepted theory of joint cracking.

During the 2015 study, Fryer cracked his knuckles while his hands were observed through a magnetic resonance imaging (MRI) machine. Jaremko and the rest of Kawchuk’s team recorded both the MRI images and the sounds produced during the experiment, and discovered a critical fact about joint cracking.

“When we put the sounds and images beside each other,” Jaremko explains, “we saw there was a sudden formation of a signal void at the time of the noise.”

But perhaps more important is what Jaremko didn’t see – a collapsing bubble. Prior research has suggested that bubble collapse was the cause of joint cracking. Kawchuk’s 2015 study, though, refuted the bubble collapse theory and laid the groundwork for Fryer’s follow-up research.

Jaremko says that bubble collapse offers a poor explanation of the phenomena he observed during the 2015 study, and fails to fit the timeframe of events. He says that while further research is required, the Kawchuk-led study offers one important finding – it disproves the cavitation theory.

“There’s been a lot of concern about joint cracking because cavitation is a destructive process. Cavitation damages propellers in marine settings, and the theory is that cavitation could lead to osteoarthritis,” Jaremko says.

“But the fact that we saw cracking happen during bubble formation, accompanied by a change in pressure in the joint, indicates that it’s more of a benign process.”

With Fryer’s new study, however, there is evidence that tribonucleation also falls short in its explanatory power, and that the signal void that Jaremko saw in the 2015 study was not a gas-filled bubble as previously believed, but rather, an empty cavity. This finding is consistent with prior research by Wildeman in 2014 and Ikels in 1970, who both failed to find a correlation between tribonucleation and the generation of a cracking sound.

Fryer’s recent study has found that when a sealed joint is filled with a denucleated fluid, decompression results in both cavity formation and an audible crack. Fryer says that the results of his study demonstrate that the cracking sound must somehow be related to the formation of a cavity – not the formation of a bubble, as tribonucleation would suggest, and not the collapse of a cavity, as cavitation would indicate.

“(The cracking sound only occurred) with denucleated fluid,” Fryer notes. “I think it’s because denucleated fluid more closely mimics real synovial fluid, but I’m not certain. This is new territory that hasn’t been studied before. The exact sound mechanism is still unclear, because it’s so hard to observe and record in real tissue.”

One of the strengths of Fryer’s in vitro wet joint model is that it was able to reliably reproduce a refractory period after audible release. However, just like the cracking sound, the refractory period was only observed in the model that incorporated denucleated fluid.

Jaremko notes that disproving the cavitation theory would indicate that joint cracking may not be as harmful to the joints as was previously believed. Although, he says, the practice of cracking one’s knuckles or joints “probably still isn’t recommended as a recreational activity.”

Fryer’s study has also raised the possibility of using fluid to improve the functioning and lifespan of artificial joints.

According to Fryer, his next step will involve quantifying joint cracking in greater detail. Currently, Fryer is partnering with the University of British Columbia to investigate joint cracking in vivo using more sensitive MRI equipment.

Fryer’s future research will involve measuring forces, tensions, cavity sizes, and dissolution times during in vivo tests. He aims to identify whether the audible crack occurs before, during or after cavity formation, in order to better understand the physics behind joint cracking.

Fryer is now actively seeking feedback from the academic community on his study in order to establish a foundation for further investigation.

“This is still preliminary work, and you always need feedback when you’re collaborating,” he says.

Fryer was recently awarded a $10,000-grant from the British Columbia Chiropractic College to continue his investigation of joint cracking, in partnership with the University of British Columbia. He hopes that his continuing research into joint cracking will validate and expand on the cavity formation model.

Fryer’s newest study, “A proposed in vitro model for investigating the mechanisms of ‘joint cracking’: a short report of preliminary techniques and observations,” can be found in the March 2017 issue of the Journal of the Canadian Chiropractic Association.

Joint cracking: Does it cause arthritis?
Joint cracking has long been hypothesized to contribute to arthritis, but what does the data say? A 2011 study published in the Journal of the American Board of Family Medicine found that despite common belief, frequent knuckle cracking does not appear to increase the risk of hand osteoarthritis – a finding that is consistent with the cavity formation model of joint cracking suggested by the results of Fryer’s study. However, a 1990 study found that habitual knuckle cracking is associated with hand swelling and lower grip strength.

Mike Straus is a freelance writer based in Kelowna, British Columbia.

Related
Alberta researchers offer insight on mystery of knuckle cracking
What makes joints pop and crack and is it a sign of disease?
Greg Kawchuk re-appointed as WFC Research Committee Chair
Investigating the science on joint diseases