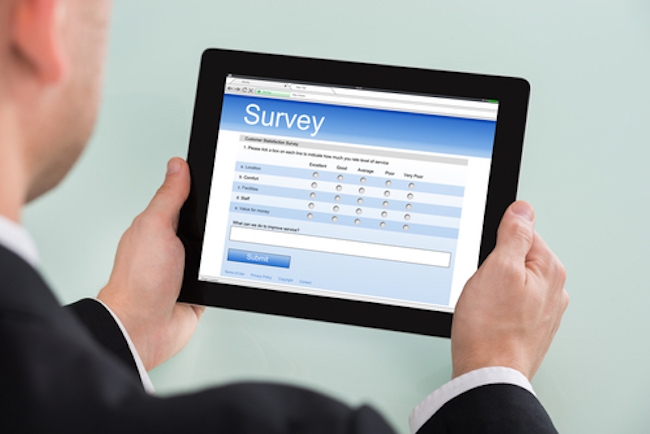 If results of a recent national survey are any indication, things may be looking up for chiropractors in Canada.

The first annual chiropractic market and practice survey was conducted by Canadian Chiropractor magazine between March and April 2016, and included 632 qualified respondents. The survey was limited to full-time and part-time chiropractors in active practice only, and excluded retired and student DCs. Ontario DCs comprised most of the survey respondents (319), followed by British Columbia (123) and Alberta (81). Forty-nine of the respondents are from the Maritimes, 28 from Quebec, 18 from Manitoba, 13 from Saskatchewan, and one from the Northwest Territories.

Commenting on the survey results, Dr. David Leprich from St. Catharines, Ont., says he was surprised to note that income has risen for 51 per cent of respondents. “I don’t think this is true for most established chiros, so this may reflect the fact that we have many new chiros who are in the growth phase.”

Leprich notes that 50 per cent of respondents practice in Ontario, and yet Ontario’s population only accounts for 38 per cent of the entire country. “This may explain the highly competitive nature of practice in Ontario. It would be interesting to see these figures for other professions, particularly massage therapy and physiotherapy.”

Income and spending
The majority of chiropractors – at least 47 per cent – in every province, except Quebec, Newfoundland and Labrador, and Prince Edward Island, reported higher incomes in 2015 compared to the previous year.

In Ontario, where half of the total survey respondents are located, only 17 per cent earned more than $200,000 in gross income last year. Almost 12 per cent of Ontario chiropractors earned between $50,000 and $75,000.

Respondents also reported other income sources that form part of their gross annual income, aside from clinical practice. Nearly 36 per cent of respondents derive supplemental income from product sales at the clinic. Earning a percentage from associates (25.47 per cent) and rental income (24.53 per cent) also rank high among chiropractors’ other sources of income. Forty-one per cent report no other income outside of clinical practice.

Meanwhile, 51 per cent of chiropractors are not planning to make any major purchase this year.

Of those planning for expenditures, new x-ray machines and other digital imaging equipment top the list of planned purchases this year. Chiropractic tables and other office furniture are also top-of-mind for spending. Software management systems and professional services are in the bottom of spending priorities. 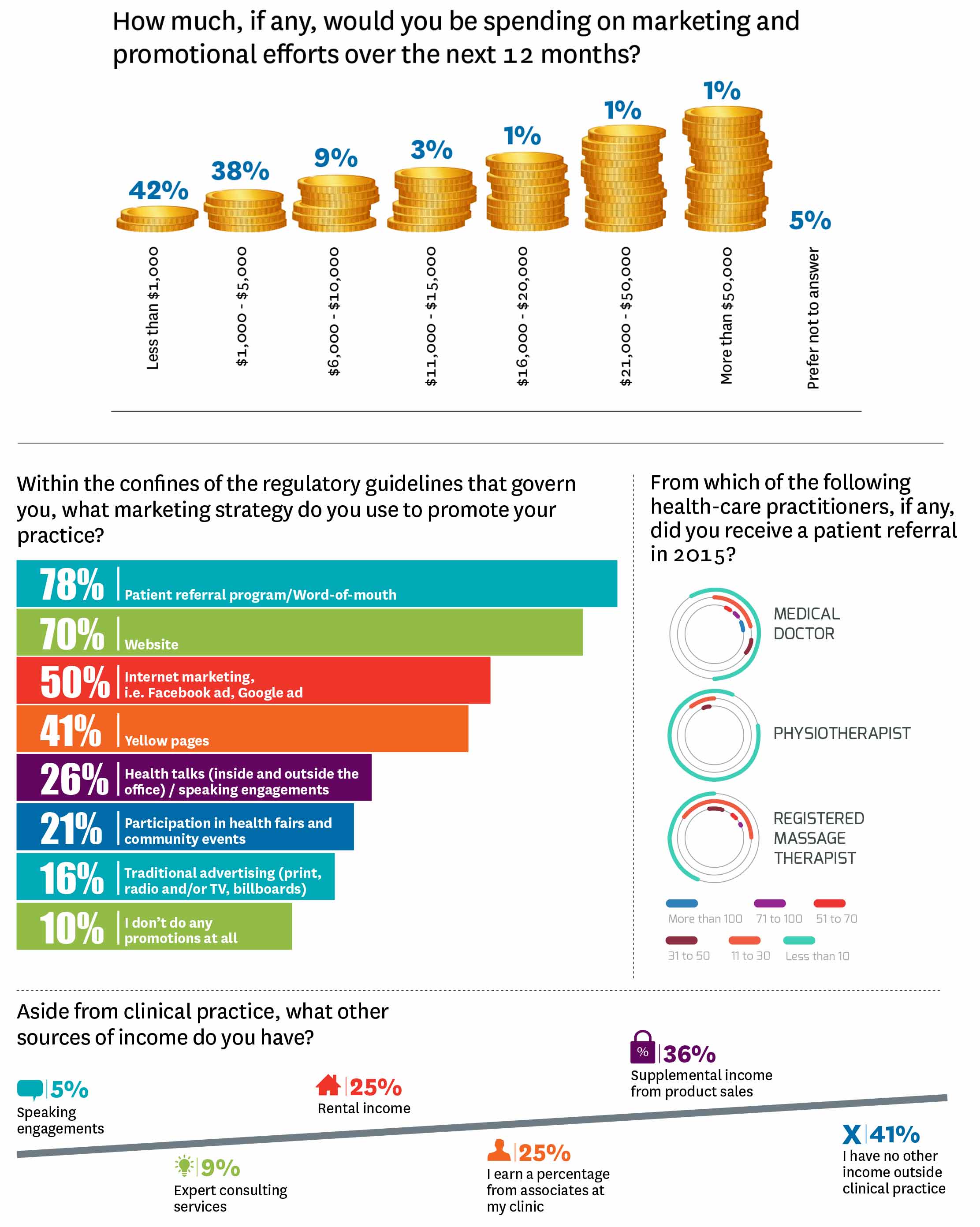 Practice insights
Most chiropractors (55.7 per cent) see between 50 and 150 patients in a typical week. The majority of DCs  (71.68 per cent) spend between 21 and 40 hours a week in clinical practice.

Patient referrals and word-of-mouth are the top strategies Canadian DCs are using to market and grow their practice, cited by 78 per cent of respondents. “Saskatchewan has very restrictive guidelines,” comments one respondent. “That’s OK, because word-of-mouth is the best anyway.”

Online marketing through social media and search engine ads are also a popular promotional tool for close to 50 per cent of the respondents. Yellow Pages is used by 41 per cent of chiropractors across Canada.

Although online tools for marketing are becoming popular, some DCs were not happy with the outcome. “I used Yelp and it was the biggest waste of money… I lost thousands,” comments one respondent.

Face-to-face interactions through public forums – such as health talks, community involvement, speaking engagements – are also an effective tool for about 47 per cent of respondents.

Traditional advertising through print, radio or TV is the least favoured type of marketing for chiropractors, as only 15.66 per cent of the respondents report using this method. Less than 10 per cent say they don’t do any promotions at all.

A quarter of the chiropractors surveyed (25 per cent) say they are “an established chiropractor in their community” and although they have a “few new patient spots,” they are not actively looking to significantly increase their patient base. In addition, 12 per cent say their practice is “thriving” and demand for chiropractic is “high” in their area.

Nearly 22 per cent, however, feel increased competition from other health-care providers, while about 16 per cent cite a high number of DCs in their area despite a generally low demand for chiropractic care. This is particularly true in Ontario.

In comparison, Alberta chiropractors seem optimistic about the chiropractic market. Almost 21 per cent say demand is high for chiropractic care, and 31 per cent say they have an “established” practice and only have few new-patient spots in their clinic a week. Nearly a quarter (22.22 per cent) report their practice is gradually becoming known in their community and predict continued growth. Only less than five per cent say their practice is struggling and have not seen any growth over the years. Sixteen per cent of Alberta practitioners say they are facing increased competition with other health-care providers (aside from chiropractors).

B.C. is telling a similar story, with 33 per cent of chiropractors running established practices with very few new-patient spots. Twenty-one per cent are citing high demand for chiropractic care in their area. Perceived competition with other health-care providers in B.C. is slightly higher than Alberta at 19.51 per cent.

The chiropractic market in the Maritime provinces reveal an even more optimistic picture. More than 40 per cent are running established practices and are not looking for significant growth, while 20 per cent say they are continuously growing over the years. Although they do not generally feel there is intense competition with other DCs in their area, chiropractors in these provinces feel increased competition with other health providers (22 per cent).

Patient retention is generally high among chiropractors, with 72.63 per cent of respondents saying they generally see more returning patients than new patients on any given day.

Mari-Len De Guzman is the editor of Canadian Chiropractor magazine. She has been a journalist for 20 years and has been editor of several business and professional publications. You can contact her at mdeguzman@annexweb.com.
Print this page