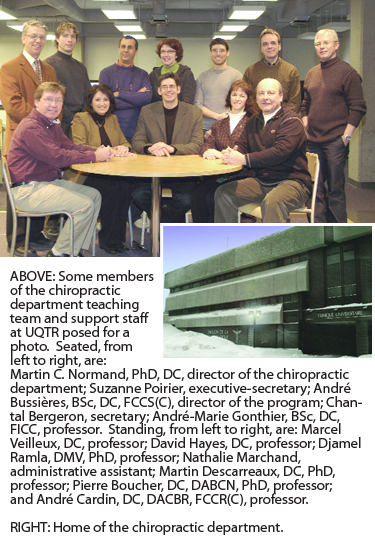 For the majority of members of our profession, the doctorate program in chiropractic (DCP) offered at the Université du Québec à Trois-Rivières (UQTR) is not very well known.  Apart from the language difference, there has been a lack of information about this extraordinary academic and professional experience within the world of higher education.  However, we are now working to improve communication.

The fact is that chiropractic in Quebec is alive and well.

THE CREATION OF A CHIROPRACTIC PROGRAM AT UQTR (1988-1992)
The idea for a chiropractic program at the University du Québec à Trois-Rivières was conceived by the first rector of the UQTR, the late Mr. Gilles Boulet.  This was in 1964, a decade before chiropractic was actually legalized in the province.

The federal Royal Commission on Health Services (aka the Hall Com-mission), 1961-1964, took into consideration the recommendations of the provincial Lacroix Commission on “chiropraxie.”  The latter ultimately made strong, positive statements about the necessity for chiropractors to be able to diagnose, and to have undergone a proper and adequate chiropractic education that would serve to benefit and protect patients.  Trois-Rivières chiropractor Dr. Gérard Bellavance, a 1949 graduate of the Canadian Memorial Chiropractic College, was asked to participate on a special committee formed by UQTR to explore the feasibility of a chiropractic program.

Residents of Quebec were confronted with major social changes during that era.  Part of the Castonguay-Nepveu Commission’s findings in 1971 pertained to the necessity for medical teaching institutions to consider the prevention of disease and the promotion of health, not only the symptoms of illness.  A new paradigm was emerging.

At the time of UQTR’s birth, strategists thought that a chiropractic education program at that institution would distinguish it from other Quebec universities.  The adoption of the Chiropractic Act and the formulation of the Code des professions in 1974, meant that the profession was formally recognized in Quebec.  Much earlier, chiropractic legislation had been enacted in Alberta in 1923 and in Ontario in 1927.  It wasn’t, in fact, until 1974 that Louisiana became the last jurisdiction in the United States to legally recognize chiropractic.

The Quebec government then placed a moratorium on the development of all new programs in the health sector.  In retrospective, this gave chiropractic space to further mature as a newly formed profession.

In 1988, a group of young and energetic chiropractors began to participate in the provincial regulatory body, the Ordre des Chiropraticiens du Québec (OCQ).  Dr. Normand Danis was elected president of the Order, and the reactivation of the dossier universitaire was placed on the top of the OCQ agenda.  Dr Richard Giguère was then president of the Association des Chiropraticiens du Québec (ACQ).  As first vice-president of the Order, I was asked to take responsibility for the university project, which represented a collaboration of the Université du Québec and the Order.

Two well-respected chiropractors, Dr. Laurent Boisvert and Dr Jocelyn Ouimet, were nominated by the OCQ and the ACQ, respectively, to be members of the university committee.  This was an example of a true partnership in action.  The then president of the Université du Québec, Claude Hamel, noted that the manner of chiropractors’ participation in implementation of a chiropractic program was “exceptional and exemplary for the professional world.”

In November 1992, after more than four years of intense work, the committee obtained government authorization to implement a five-year, 245-credit chiropractic program at UQTR.  It was scheduled to start just 10 months later in order to pre-empt any sudden changes in the political climate.  This was a world premiere in the sphere of francophone universities.

The committee was unsuccessful in locating a French-speaking chiropractor with master’s or doctoral credentials who would be interested in directing the program’s integration into the university.  Since I had been involved from the beginning, they asked me.  So, after consulting with my family, friends, and mentors, I acted on the invitation from the vice-rector to apply for a professorship.  Subsequent to being the first professor hired for the chiropractic program, I was its director for almost 10 years, and I served in almost every academic and administrative position at the program and departmental level, in addition to having regular teaching responsibilities.

Forty-five students were chosen out of 600 applicants to join the first class that started in the fall of 1993.  With 245 credits spread over five years and 77 different courses, the DPC is now in its 13th year of existence. The program presently requires 97 staff members (25 full-time professors and 72 lecturers drawn from six university departments), though their numbers vary according to the academic calendar.  The chiro-practic department is responsible for contributing 12 professors and 35 lecturers, including clinicians for the university clinic.

This situation resulted in a clash of ideas and vision for the development of the program, against a backdrop of university reorganization and a persistent budget deficit.  Pressure for compliance with CCE(C) standards, as well as internal personal and systemic conflict, resulted in misunderstanding, open confrontation, and a fracturing of normal function, leading to administrative tutorship by the university’s administration.

THE REAFFIRMATION OF ACCREDITATION
Recently, the DPC has been again going through the accreditation process.  A self-study was done, and the CCE(C) site-visit team came onto the campus in September 2005. Consequently, accreditation status has been granted for another four years.  The new director of the chiropractic department is Martin C. Normand, PhD, DC, and the newly designated director of the program committee is André Bussières, DC, FCCS(C).

TOWARD A NEW MODEL
The university world is constantly changing, to reflect changing social needs and to elevate our collective knowledge.  Compared to an older institution such as Université Laval in Quebec City, which was founded in 1852, UQTR is certainly a young university.  It comprises 21 departments that offer 150 distinct programs.  Opened in 1969, it is part of the largest public university network in the province, the Université du Québec (UQ).  Last year, there were more than 85,000 students in the UQ network, with approximately 10,000 of them studying at UQTR.

Instead of being centred around faculties, the Université du Québec à Trois-Rivières is a program-based university.  While that may be a very good model on paper, it is not necessarily easy to work with in the real world.  All departments are involved in one or more programs.  Each department’s budget depends on the number of students and the square footage used for academics and research.  Departments can become engaged in power struggles over money, laboratory facilities, number of faculty members, and control over the development of their disciplines.  All programs, including chiropractic, depend on different departments to serve their needs for courses, research and continuing education.  The doctorate program in chiropractic currently offers 77 different courses requiring the involvement of the chiropractic department and five other departments including chemistry/biology, physical activity sciences, accounting, health sciences (nursing), and philosophy.  While 56 courses are attached to the department of chiropractic, 21 are coordinated by other departments.  Management is a complex task and raises many challenges.
Proposals have been made for radical change, perhaps even to a faculty-based system, but they are not accepted by the majority.  Time will be needed for any transition, and progressive models of change will be necessary.

Recently, a new task force has been created at the UQTR under the leadership of Dr. Michel Gervais, who is a well-respected university professor and past-rector of Université Laval as well as a past-president of the conference of rectors and principals of Quebec universities (CREPUQ).  This task force, called the Commission Spéciale Multipartite (CSM), has been asked to submit ideas for special interdisciplinary projects designed to foster teamwork at UQTR.  There is a proposal for a multidisciplinary integrative care clinic where professors and clinicians from various disciplines will work together to treat patients.  Other innovative health programs such as midwifery (1998) and podiatry (2003) have been developed at UQTR.  A massokinesiotherapy program is being delivered through the physical activity sciences department.  Last year, under the auspices of the faculty of medicine of the Université de Montréal and the Centre hospitalier de Trois-Rivières (CHTR), a cohort of medical students started their preparatory year at UQTR.  In October 2005, the university’s new rector, Ghislain Bourque, announced that a Traditional Chinese Medicine program was under serious consideration, and there are plans for eventually incorporating occupational therapy. Since chiropractic students are operating in this multidisciplinary context on a daily basis, the opportunities are numerous and the challenges are great.

THE CURRENT STATUS OF THE PROGRAM
The DPC is currently under review, which is part of normal procedure for every UQTR program, which must be re-evaluated and revised before the end of each 10-year period.  This process, under the guidance of the dean of undergraduate studies, and driven by the Comité de programme, which includes three students, should be further completed this year.  The task has been distributed to various working groups each under the supervision of a professor.  Recommendations will subsequently be sent by the Comité de programme to the department of chiropractic for input, corrections and modifications, and submitted for final approval to the Commission des études (CE).  The rector is the president of the CE, which is comprised of representatives elected by the professors, lecturers and students.

THE STUDENTS’ ACHIEVEMENTS
With the number of admissions limited each year to 45 students, the selection process is rigorous.  Two-thirds of incoming chiropractic students have recently graduated from college (CEGEP), and one-third have previously earned a university degree.  Intake efforts are underway to increase the proportion of university grads.  Surveys done with UQTR students reveal that they are strongly motivated and keenly interested in both their educational program and their future career in chiropractic.  Additionally, the Canadian Chiropractic Examining Board (CCEB)/National Board of Chiropractic Examiners (NBCE) board exam results for UQTR students are generally superlative.  This, despite the fact that until the CCEB exams were made available in two languages, the students studied for five years in French but had to write board exams in English.

More than two-thirds of the directors on the board of the Association des chiropraticiens du Québec (ACQ) are UQTR graduates, including the president of that association, Dr. François Auger.  Not only is he a UQTR/DPC lecturer, and in private practice three days a week, but he is also finishing his master’s degree at the Université du Québec à Montréal (UQUAM), in addition to being a busy family man and the father of three young children.  He is an example of the commitment to the advancement of the chiropractic profession shown by young UQTR alumni.  Many others are following in his footsteps, and for that reason we may feel confidence in the future of the profession.•

Editor’s Note: The Trois-Rivières story will continue next issue with Part 2.