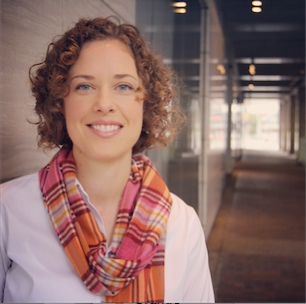 Many chiropractors play sports. But few DCs have competed at the level that Lindsay Alcock has. Today, this medal winning skeleton racer is matching her experience in the heart-racing, headfirst-sliding sport with chiropractic know-how to treat patients at Canada Olympic Park – the very facility where she honed her skeleton skills.

Alcock started competing in skeleton in 1998 and she advanced quickly. She placed sixth in the 2002 Winter Olympics in Salt Lake City. She won a silver medal in the women’s skeleton event at the 2004 Fédération Internationale de Bobsleigh et de Tobogganing (FIBT) World Championship. That year she also won the women’s Skeleton World Cup title. In 2006, she placed tenth in the Winter Olympics in Torino.

Alcock’s interest in becoming a chiropractor started when she realized how important DCs are in the world of competitive sports.
“We were very lucky to have a chiropractor travel with us at the games I competed in,” she says. “His name is Dr. Greg Uchacz. I felt like he was a miracle worker.”

Alcock says Uchacz considered not only racers’ physical states, but also their psychological well-being. “When you were on the table five minutes away from a major competition, he would have these little nuggets of inspiration.”

She recalls one of those nuggets well. “I remember Greg saying to me one day before a major competition, ‘You are the quiet giant.’ That inspired me. I realized I didn’t need bravado to succeed. I could be the authentic athlete that I was, and that meant going about my business quietly.”

Fired up to help athletes
“I was inspired by what he was able to accomplish,” Alcock says of Uchacz. She decided that she also wanted to encourage other athletes as a chiropractor. With Uchacz’s help, she won a scholarship to attend Palmer College of Chiropractic West in San Jose, Calif., where she used her sports-honed sense of self-control to succeed.

“It was a continuation of being disciplined,” she says of the college’s program. “Getting up at the same time every day, sheer will and determination to study and learn. That was absolutely like being an athlete.”

The rigors of chiropractic college were familiar, but the move from school to practice was foreign territory. A short time after she graduated in the summer of 2013, her mother died from cancer. Alcock was getting ready for her first job.

“I didn’t really get the chance to grieve. So the whole transition was more rocky than I anticipated and outside of my control,” she recalls.

In addition to dealing with her mother’s death, Alcock had to manage a new way of working. “As athletes, we have spurts of activity during our days… It’s all very regimented and it’s broken up. For me to be in an office for eight hours straight, I felt a little caged in.”

A new start with WinSport
Alcock found a new position this past May, however, as the staff chiropractor at the WinSport Medicine Clinic at Canada Olympic Park, where she trained in skeleton.

This job suits her better than her previous post did.

“I can structure my days so I don’t have to be in the office for so long. I can move around and take on different tasks.” For instance, when she isn’t treating patients in the office, one might find Alcock in the park’s Ice House Sliding Centre where athletes practise their push starts, which have an enormous effect on their track times.

Incidentally, Alcock was known for her exceptionally fast starts in skeleton. She posted a 5.30-second start early in her career when most other racers were still trying to beat 6 seconds. But her speedy start isn’t the only reason she’s an Ice House asset.

“As a chiropractor, I can see the asymmetries and I can communicate with the strength coach to figure out what’s best for an athlete and get them to perform at a higher level,” she says.

Her history as an elite athlete helps her understand patients’ points of view when they need chiropractic care to reach their own sports goals.

“I realize what it takes to compete at a high level at a sport. When I’m working with patients, I understand the whole program: nutrition, sports psychology, and the physical, where I play a role. I can speak their language. I understand the sacrifices they’re making.”

Alcock says she’s proud of her profession and satisfied with her work. Nonetheless, spending so much time with athletes at Canada Olympic Park makes her wonder if her sports career really is over.

“It’s pretty amazing to be at a facility I consider to be world class… It makes me want to come out of retirement, to be honest. I want to train here.”

A possibility? “Every once in a while there’s a little flicker: ‘I probably could,’” Alcock says. She’s on the hunt for a new physical activity, perhaps a team sport, so she can keep her competitive edge sharp.

But she wouldn’t leave her career as a chiropractor. “I’m happy doing what I’m doing, giving back and having a different perspective now.”