A triple-play strategy for success. 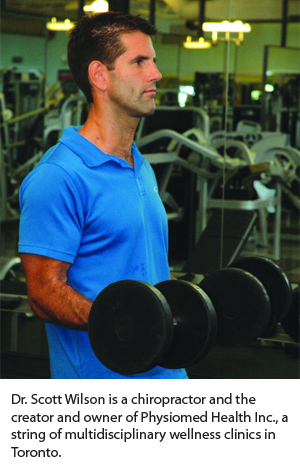 When Susan Wong’s right foot went numb after a cardio workout at her local fitness centre, she knew something was wrong. Luckily, as an adjunct to Pilates classes and a juice bar, her club also offered chiropractic services. She headed there immediately. After an analysis, orthotics were prescribed. “I wear them now, and have no problems with my feet,” says Wong, 30, a research analyst with the City of Toronto. Now putting her best foot forward in exercise classes, she credits her chiropractor with finding the solution to her problem. “It’s a great convenience, having a chiropractic clinic at the club I visit three times a week,” she adds.

Wong’s chiropractor is Dr. Scott Wilson, a 37-year-old entrepreneurial dynamo who believes in the realtor’s tried-and-true tenet of location, location, location. “My business approach is based on a triple-play strategy: affiliating myself with a health-club chain that brings legions of potential fitness-conscious people to my clinic; recruiting young graduates; and carving out a niche within chiropractic practice,” he says.

NEW BEGINNINGS – NOT HUMBLE
On graduating from the Canadian Memorial Chiropractic College (CMCC) in 1994, Dr. Wilson began practising at a clinic in Toronto’s trendy Yorkville neighbourhood. He was soon offered a share of the practice and, within months, took full ownership of the business.

Wilson recognized, early on, the difference between growing a practice and the degree of effort needed to actually construct an enterprise. But the idea of corporate expansion took root in Wilson’s mind and refused to languish in the shade.

In addition to providing quality patient care, Wilson envisioned a practice that afforded him time to pursue his other passions: marathon running, baseball – he was once invited to try out for the Canadian National team, but a rotator cuff injury forced him to abandon his field of dreams – canoeing, acoustic guitar playing and cuddling with his six-year-old daughter, Olivia.

“I love teaching and learning new things, and through my daughter I’m discovering that life is a constant evolution,” he intimates.

Since his company was incorporated seven years ago, Wilson has taken charge of his own career direction, steadfastly holding to the “build it and they will come” philo-sophy. Today, he is the majority shareholder in the company, which represents a network of 12 multi-disciplinary clinics nesting in sym-biotic relationship with Premier Fitness Clubs. One of Canada’s largest fitness facility chains, Premier boasts more than 200,000 members, with locations – some reaching over 50,000 square feet – sprinkled across Southern Ontario.

Wilson’s interest in helping young chiropractic graduates has led him to repeatedly take them into his clinics, along with student volunteers. Some of the best are now his clinic directors and partners.

“It’s not a franchise – I own at least 50 per cent of each clinic,” he explains. “We market and brand as a group so that our message to clients remains consistent.”

THE BILLION-DOLLAR BUSINESS
Dr. Wilson holds monthly meetings with his clinic directors and business managers to conduct clinical and “practice building” rounds, Wilson, who still practises a half-day each week, points out that these sessions provide a forum for discussing tactical initiatives.

One of those initiatives, dubbed “Building a Billion Dollar Business,” is the company’s long-term goal. “We believe it’s achievable as we open new locations across Ontario and build our brand by piggybacking our marketing campaigns onto Premier, which welcomes hundreds of new members each month.”

To attract and retain staff, Wilson has founded a health university within his company to provide in-house training through inter-clinic workshops and intra-clinic seminars. All personnel report for training. “That keeps the troops fresh and excited about their practice and their integral roles in this growing enterprise,” says Wilson.

Dr. Ali Tabrizi (CMCC graduate, 2004), a partner and director of the company’s 1,200-square-foot Yorkdale operation, is thrilled to be part of Wilson’s team.

“He gave me the opportunity to run one of his clinics,” says Tabrizi, “He told me, up front, that it would be a slow build. There was no salary, no guarantees, but if the clinic made money, I would too.”

Weighed down by college debts following graduation, Dr. Tabrizi first practised at other rehab and chiropractic clinics but he quickly realized how tough it was going to be for him. “I wanted to be in a winning organization, so I contacted Dr. Wilson, and after volunteering three weeks of my time at his clinics, I joined the company. He’s become my mentor and has taught me a great deal about chiropractic, about business, and about life in general.”

It’s a sentiment echoed by Dr. Daniel Bringleson (CMCC graduate, 2001), partner and clinic director at the company’s newly remodelled 7,000-square-foot east-end Toronto clinic. “As a team, we’ve learned how to grow a practice. We consider ourselves groundbreakers because of the group’s close interactions and shared learning objectives,” says Dr. Bringleson. “Together, led by Dr. Wilson, we have restructured the clinic business model and focus of care to provide our brand of high-octane health and wellness services to a large, diverse population.”

DEVELOPING THE SOFTWARE
In order to help meet its clinical and business milestones, Wilson’s visionary company has developed its own software program with patient databases that provide critical information in real time. “The system tracks the complexities of our enterprise, allowing us to stay on top of oper-ations anytime, anywhere,” comments Wilson. “I can be halfway round the world, log onto my laptop, and be updated on everything happening in our locations.”

The software program, called “Colligo,” was created by Wilson in tandem with one of his business development managers, Dr. Abraham Tio, a medical doctor and self-taught computer programmer.

“We spent many sleepless nights fine-tuning the system,” recalls Wilson. “Because of his background, Dr. Tio understands the information needed to effectively manage our medical and administrative functions.”

The software was written in about three months, but modifications are ongoing as the company evolves to keep pace with health-care legislative and policy changes related to provincial health insurance (OHIP) and private insurance plans.
“We went through a difficult first year, when we were using it and beta-testing it simultaneously,” Wilson notes. “It has to be flexible, so programs can be added or adapted ‘on the fly’.”

ON THE MOVE
Wilson has not established office headquarters, in an effort to keep capital costs down.
He is, himself, something of a gadfly; always on the move, visiting his clinics, chatting with staff and patients, and giving presentations to major corporations in order to attract employee health contracts. He conducts most of his business through one-on-one contacts and by his omnipresent BlackBerry and Bluetooth.

“People like the personal touch, and I’m a people person,” he nods. “Nothing equals a strong handshake to gain the confidence of patients and business associates.”

Susan Wong is still a loyal client who has come to rely on the quality of care that she receives through Wilson’s clinic at her health facility.

“Dr. Wilson exudes confidence and it’s contagious,” she smiles. “His treatments make me feel stronger and give me greater self-esteem. I’m not afraid to try new things like skiing or rock climbing. I believe my body is capable of trying anything. That’s what keeps me coming back.”•